Cosmopolitan is an international fashion magazine for women. As The Cosmopolitan it was first published in 1886 in the United States as a family magazine, it was later transformed into a literary magazine and eventually became a women's magazine in the late 1960s. Also known as Cosmo, its content as of 2011 included articles on women's issues, relationships, sex, health, careers, self-improvement, celebrities, fashion, and beauty. Published by Hearst Magazines, Cosmopolitan has 64 international editions, is printed in 35 languages and is distributed in more than 110 countries.[3]

Cosmopolitan began as a family magazine, launched in 1886 by Schlicht & Field of New York as The Cosmopolitan.[4]

Paul Schlicht told his first-issue readers that his publication was a "first-class family magazine", adding, "There will be a department devoted exclusively to the concerns of women, with articles on fashions, on household decoration, on cooking, and the care and management of children, etc. There was also a department for the younger members of the family."

Cosmopolitan's circulation reached 25,000 that year, but by November 1888, Schlicht & Field were no longer in business. John Brisben Walker acquired the magazine in 1889. That same year, he dispatched Elizabeth Bisland on a race around the world against Nellie Bly to draw attention to his magazine.[5]

In 1897, Cosmopolitan announced plans for a free correspondence school: "No charge of any kind will be made to the student. All expenses for the present will be borne by the Cosmopolitan. No conditions, except a pledge of a given number of hours of study." When 20,000 immediately signed up, Walker could not fund the school and students were then asked to contribute 20 dollars a year. Also in 1897, H. G. Wells' The War of the Worlds was serialized, as was his The First Men in the Moon (1900). Olive Schreiner contributed a lengthy article about the Boer War.[citation needed] 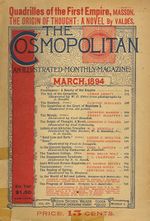 Hearst formed Cosmopolitan Productions (also known as Cosmopolitan Pictures), a film company based in New York City from 1918 to 1923, then Hollywood until 1938, for the purpose of making films from stories published in the magazine.[citation needed]

With a circulation of 1,700,000 in the 1930s, Cosmopolitan had an advertising income of $5,000,000. Emphasizing fiction in the 1940s, it was subtitled The Four-Book Magazine since the first section had one novelette, six or eight short stories, two serials, six to eight articles and eight or nine special features, while the other three sections featured two novels and a digest of current non-fiction books. During World War II, sales peaked at 2,000,000.[citation needed]

The magazine began to run less fiction during the 1950s. Circulation dropped to slightly over a million by 1955, a time when magazines were overshadowed during the rise of paperbacks and television. The Golden Age of magazines came to an end as mass market, general interest publications gave way to special interest magazines targeting specialized audiences.[citation needed]

Cosmopolitan's circulation continued to decline for another decade until Helen Gurley Brown became chief editor in 1965 and remodeled the magazine as New Cosmopolitan and re-invented it as a magazine for modern single career women.[11] In 1967, the magazine reclaimed the name Cosmopolitan. The magazine eventually adopted a cover format consisting of a usually young female model, typically in a low cut dress or bikini. The magazine set itself apart by frankly discussing sex from the point of view that women could and should enjoy sex without guilt. The first issue under Helen Gurley Brown featured an article on the (then new) birth control pill.[11]

This was not Brown's first publication dealing with sexually liberated women. Her 1962 advice book, Sex and the Single Girl, had been a bestseller.[citation needed] Fan mail begging for Brown's advice on many subjects concerning women's behavior, sexual encounters, health, and beauty flooded her after the book was released. Brown sent the message that a woman should have men complement her life, not take it over. Enjoying sex without shame was also a message she incorporated in both publications.[12]

In Brown's early years as editor, the magazine received heavy criticism. The magazine ran a near-nude centerfold of actor Burt Reynolds in April 1972, causing great controversy and attracting much attention.[13]

In April 1978, a single edition of Cosmopolitan Man was published as a trial, targeted to appeal to men. Its cover featured Jack Nicholson and Aurore Clément. It was published twice in 1989 as a supplement to Cosmopolitan.[14] Hearst abandoned this project after the company purchased Esquire.[citation needed] 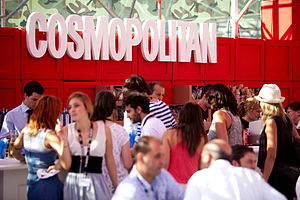 The magazine, and in particular its cover stories, have become increasingly sexually explicit in tone, and covers have models wearing revealing clothes. Kroger, the largest grocery chain in the United States, used to cover up Cosmopolitan at checkout stands because of complaints about sexually inappropriate headlines.[15] The UK edition of Cosmopolitan, which began in 1972, was the first Cosmopolitan magazine to be branched out to another country. It was well known for sexual explicitness, with strong sexual language, male nudity and coverage of such subjects as rape. In 1999 CosmoGIRL!, a spinoff magazine targeting a teenage female audience, was created for international readership. It shut down in December 2008.

The magazine currently features topics including sex, relationships, beauty, fashion and health. The advice and feature articles in the US edition are written to a presumed audience of white women.[16]

Cosmopolitan has 64 international editions worldwide published in 35 languages with distribution in more than 100 countries making Cosmopolitan the largest-selling young women's magazine in the world.[3] Some international editions are published in partnerships, such as licenses or joint ventures, with established publishing houses in each local market.

Cosmopolitan has since the sixties been a women's magazine discussing such topics as sex, health, fitness and fashion. Cosmopolitan also has a section called "Ask Him Anything" where a male writer answers readers' questions about men and dating.

Awards and features by Cosmopolitan

Fun, Fearless Male of the Year

Fun, Fearless Female of the Year

Bachelor of the Year

Cosmopolitan's November issue features the hottest bachelors from all 50 states. Pictures and profiles of all the Bachelors are posted on www.cosmopolitan.com, where readers view and vote for their favorite, narrowing it down to six finalists. A team of Cosmopolitan editors then selects the Bachelor of the Year, who is announced at an annual party and media event in New York. The 50 bachelors generally appear on programs such as The Today Show.[17]

In the May 2006 issue of Cosmopolitan, the magazine launched the Practice Safe Sun campaign, an initiative aimed at fighting skin cancer by asking readers to stop all forms of tanning other than tanning from a bottle.[20] In conjunction with the campaign, Cosmo's editor-in-chief, Kate White, approached Congresswoman Carolyn Maloney (D-NY), known for her support of women's health issues, with concerns that women weren't fully aware of the dangers of indoor tanning and the effectiveness of the current warning labels.[21] After careful review, the Congresswoman agreed that it was necessary to recommend that the FDA take a closer look. She and Representative Ginny Brown-Waite (R-FL) introduced the Tanning Accountability and Notification Act (TAN Act - H.R. 4767) on February 16, 2006.[20] President Bush signed the act in September 2007, and the new federal law requires the FDA to scrutinize the warning labels on tanning beds and issue a report by September 2008.[22]

Cosmopolitan UK launched the Cosmo Blog Awards [23] in 2010. The Awards attracted more than 15,000 entries and winning and highly commended blogs were voted for in several categories including beauty, fashion, lifestyle and celebrity. The 2011 Awards launched in August 2011 and nominations are open until 31 August 2011. All UK-based bloggers and blogs written by British blogges abroad with a British perspective can be entered.

In May 2015, Cosmopolitan UK announced they were launching their first ever fragrance. This is considered a first in the magazine industry. Named 'Cosmopolitan, The Fragrance', the perfume takes on the notion of their much-loved phrase 'Fun, Fearless Female' and is set to launch in September.[24][25]

In September 2014, Cosmopolitan began endorsing political candidates. The endorsements are based on "established criteria" agreed upon by the magazine's editors. Specifically, Cosmopolitan will only endorse candidates that support equal pay laws, legal abortion, free contraceptives, gun control and oppose voter identification laws. Amy Odell, editor of Cosmopolitan.com, has stated that under no circumstances will the magazine endorse a political candidate that is pro-life: "We’re not going to endorse someone who is pro-life because that’s not in our readers’ best interest.”[26] According to Joanna Coles, the magazine's Editor-in-Chief, the endorsements of Cosmopolitan will focus on "candidates in swing states or candidates who are strongly in favor of issues like contraception coverage or gun control."[27] In the 2014 U.S. elections, Cosmopolitan officially endorsed twelve Democratic candidates. However, only two of them won their respective political campaigns.[28]

In its January 1988 issue, Cosmopolitan ran a feature claiming that women had almost no reason to worry about contracting HIV long after the best available medical science indicated otherwise. The piece claimed that unprotected sex with an HIV-positive man did not put women at risk of infection and went on to state that "most heterosexuals are not at risk" and that it was impossible to transmit HIV in the missionary position.[29] This article angered many knowledgeable people, including AIDS and gay rights activists.[according to whom?]

Whilst considered a magazine for adult women, Cosmopolitan has been accused of subtly targeting children.[30] Former model Nicole Weider accused the magazine of using slang "which is used by young people not adults" and using (then) underage celebrities, such as Dakota Fanning and Selena Gomez, as well as other celebrities popular with teens such as Ashley Greene and Demi Lovato, in an attempt to gain the attention of underage girls.[30]

Victoria Hearst, a granddaughter of William Randolph Hearst (founder of Cosmopolitan's parent company) and sister of Patty Hearst, has lent her support to a campaign which seeks to have Cosmopolitan classified as harmful under the guidelines of "Material Harmful to Minors" laws. Hearst, the founder of an evangelical Colorado church called Praise Him Ministries[31] states that "the magazine promotes a lifestyle that can be dangerous to women’s emotional and physical well being. It should never be sold to anyone under 18".[30] Donald Clark, the secretary of the Federal Trade Commission (FTC), has also shown interest in the matter.[30]

Cosmopolitan was criticized by Katie Yoder of the Campaign Life Coalition for its September 2014 decision to exclude pro-life candidates in its endorsements, stating "Yes, Cosmo deeply cares about 'all young women.' Minus those pro-life women voters, women candidates – and unborn females, of course."[32]