The Cotswolds is an area in south central England containing the Cotswold Hills, a range of rolling hills which rise from the meadows of the upper Thames to an escarpment, known as the Cotswold Edge, above the Severn Valley and Evesham Vale. The area is defined by the bedrock of Jurassic limestone that creates a type of grassland habitat rare in the UK and that is quarried for the golden coloured Cotswold stone.[1] It contains unique features derived from the use of this mineral; the predominantly rural landscape contains stone-built villages, historical towns and stately homes and gardens.

The Cotswolds are roughly 25 miles (40 km) across and 90 miles (145 km) long, stretching south-west from just south of Stratford-upon-Avon to just south of Bath. It lies across the boundaries of several English counties; mainly Gloucestershire and Oxfordshire, and parts of Wiltshire, Somerset, Worcestershire and Warwickshire. The hills give their name to the Cotswold local-government district in Gloucestershire, which administers a large part of the area. The highest point of the region is Cleeve Hill at 1,083 ft (330 m),[2] just to the north of Cheltenham.

There is evidence of Neolithic settlement from burial chambers on Cotswold Edge, and there are remains of Bronze and Iron Age forts.[3] Later the Romans built villas, such as at Chedworth,[4] settlements such as Gloucester, and paved the Celtic path later known as Fosse Way.[5]

During the Middle Ages, the Cotswolds became prosperous from the wool trade with the continent, with much of the money made from wool directed towards the building of churches. The area still preserves numerous large, handsome Cotswold Stone "wool churches". The affluent area in the 21st century has attracted wealthy Londoners and others who own second homes here or have chosen to retire to the Cotswolds.

The name Cotswold is popularly attributed the meaning "sheep enclosure in rolling hillsides",[6][7] incorporating the term, wold, meaning hills. However, the English Place-Name Society has for many years accepted that the term Cotswold is derived from Codesuualt of the 12th century or other variations on this form, the etymology of which was given, 'Cod's-wold', which is 'Cod's high open land'.[8] Cod was interpreted as an Old English personal name, which may be recognised in further names: Cutsdean, Codeswellan, and Codesbyrig, some of which date back to the eighth century AD.[9] It has subsequently been noticed that "Cod" could derive philologically from a Brittonic female cognate "Cuda", a hypothetical mother goddess in Celtic mythology postulated to have been worshipped in the Cotswold region.[10][11] 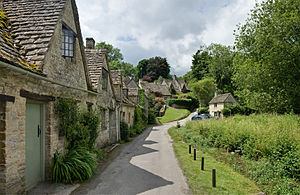 The spine of the Cotswolds runs southwest to northeast through six counties, particularly Gloucestershire, west Oxfordshire and south western Warwickshire. The northern and western edges of the Cotswolds are marked by steep escarpments down to the Severn valley and the Warwickshire Avon. This feature, known as the Cotswold escarpment, or sometimes the Cotswold Edge, is a result of the uplifting (tilting) of the limestone layer, exposing its broken edge.[12] This is a cuesta, in geological terms. The dip slope is to the southeast. On the eastern boundary lies the city of Oxford and on the west is Stroud. To the southeast, the upper reaches of the Thames Valley and towns such as Lechlade, Tetbury and Fairford are often considered to mark the limit of this region. To the south the Cotswolds, with the characteristic uplift of the Cotswold Edge, reach beyond Bath, and towns such as Chipping Sodbury and Marshfield share elements of Cotswold character.

The area is characterised by attractive small towns and villages built of the underlying Cotswold stone (a yellow oolitic limestone).[12] This limestone is rich in fossils, particularly of fossilised sea urchins. Cotswold towns include Bourton-on-the-Water, Broadway, Burford, Chipping Norton, Dursley, Moreton-in-Marsh, Northleach, Stow-on-the-Wold, Stroud and Winchcombe. Bath, Cheltenham, Cirencester, Gloucester and Stroud are larger urban centres that border on, or are virtually surrounded by, the Cotswold AONB.

The town of Chipping Campden is notable for being the home of the Arts and Crafts movement, founded by William Morris at the end of the 19th and beginning of the 20th centuries.[13] William Morris lived occasionally in Broadway Tower, a folly, now part of a country park.[14] Chipping Campden also is known for the annual Cotswold Olimpick Games, a celebration of sports and games dating back to the early 17th century.[15]

Cotswold stone is a yellow oolitic Jurassic limestone. This limestone is rich in fossils, particularly of fossilised sea urchins. When weathered, the colour of buildings made or faced with this stone is often described as honey or golden.[16] The stone varies in colour from north to south, being honey coloured in the north and north east of the region, as shown in Cotswold villages such as Stanton and Broadway; golden coloured in the central and southern areas, as shown in Dursley and Cirencester; and pearly white in Bath.[17] The rock outcrops at places on the Cotswold Edge; small quarries are common. The exposures are rarely sufficiently compact to be good for rock-climbing. However, an exception is Castle Rock, on Cleeve Hill, above Bishop's Cleeve, near Cheltenham.

Rolling hills and farm fields that typify the Cotswolds landscape

The Cotswolds were designated as an Area of Outstanding Natural Beauty (AONB) in 1966, with an expansion on 21 December 1990 to 1,990 square kilometres (768 sq mi). In 1991, all AONBs were measured again using modern methods. The official area of the Cotswolds AONB was increased to 2,038 square kilometres (787 sq mi). In 2000, the government confirmed that AONBs had the same landscape quality and status as National Parks.[18] The Cotswolds AONB, which is the largest in England and Wales, stretches from the border regions of South Warwickshire and Worcestershire, through West Oxfordshire and Gloucestershire, and takes in parts of Wiltshire, Bath and North East Somerset in the south. Gloucestershire County Council is responsible for sixty-three percent of the AONB.[19]

The Cotswolds Conservation Board has the task of conserving and enhancing the AONB. Established under statute in 2004 as an independent public body, the Board carries out a range of work from securing funding for 'on the ground' conservation projects, to providing a strategic overview of the area for key decision makers, such as planning officials. The Board is funded by Natural England and the seventeen local authorities that are covered by the AONB.[20]

While the beauty of the Cotswolds AONB is intertwined with that of the villages that seem almost to grow out of the landscape, the Cotswolds were primarily designated an Area of Outstanding Natural Beauty for the rare limestone grassland habitats as well as the old growth beech woodlands that typify the area. These habitat areas are also the last refuge for many other flora and fauna, with some so endangered that they are protected under the Wildlife and Countryside Act 1981. Cleeve Hill, and its associated commons, is a fine example of a limestone grassland and it is one of the few locations where the Duke of Burgundy butterfly may still be found in abundance.[21]

The uniqueness and value of the Cotswolds is shown in the fact that five European Special Areas of Conservation, three National Nature Reserves and more than eighty Sites of Special Scientific Interest are within the Cotswolds AONB.[22]

The Cotswold Voluntary Wardens Service was established in 1968 to help conserve and enhance the area, and now has more than 300 wardens.

The Cotswold Way is a long-distance footpath, just over 100 miles (161 km) long, running the length of the AONB, mainly on the edge of the Cotswold escarpment with views over the Severn Valley and the Vale of Evesham.[23] 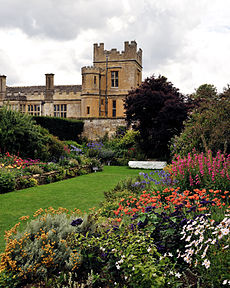 The "Secret Garden" at Sudeley Castle

Pictured right is the Garden of Sudeley Castle at Winchcombe. The present structure was built in the 15th century and may have been on the site of a 12th-century castle.[24] It is situated north of the Spa town of Cheltenham which has much Georgian architecture of some merit. Close by on the A4135 in Beaverston village is the ancient fortress known as Beverston Castle founded in 1229 by Maurice de Gaunt.[25] Within the Cotswold area lies Calcot Manor which can be accessed on the A4135 road from Beaverston and is located some 4 miles (6 km) west of Tetbury.[26] The Manor house building was established in about 1300 AD by Henry of Kingswood as a tithe barn.[27]

Tetbury Market House is perhaps worth a mention as it was built in 1655.[28] During the Middle Ages, Tetbury became an important market for Cotswold wool and yarn. Chavenage House is an Elizabethan era manor house 2.4 kilometres (1.5 mi) northwest of Tetbury.[29] Of some interest is Chedworth Roman Villa. Recent excavations have revealed more of the structure and mosaics, which are now excellently presented. It is located just off the Roman road known as the Fosse Way, and 8 miles (13 km) north of the important town of Corinium Dobunnorum (Cirencester). Cirencester Abbey was founded as an Augustinian monastery in 1117[30] and Malmesbury Abbey was one of the few English houses with a continual history from the 7th century through to the Dissolution of the Monasteries.[31]

An unusual house in this area is Quarwood a Victorian Gothic house in Stow-on-the-Wold, Gloucestershire. The grounds, covering 42 acres (17 ha), include parkland, fish ponds, paddocks, garages, woodlands and seven cottages.[32] Another is Woodchester Mansion, an unfinished, Gothic revival mansion house in Woodchester Park near Nympsfield in Woodchester, Gloucestershire.[33] Newark Park is a Grade I listed country house of Tudor origins located near the village of Ozleworth, Wotton-under-Edge, Gloucestershire. The house sits in an estate of 700 acres (300 ha)[34] at the southern end of the Cotswold escarpment.

Of the many Manor houses built in the area Owlpen Manor is a Tudor Grade I listed manor house of the Mander family, situated in the village of Owlpen in the Stroud district of Gloucestershire. Moving further north, Broadway Tower is a folly on Broadway Hill, near the village of Broadway, in the English county of Worcestershire. To the south of the Cotswolds is Corsham Court an English country house in a park designed by Capability Brown situated in the town of Corsham, 3 miles (5 km) west of Chippenham, Wiltshire. 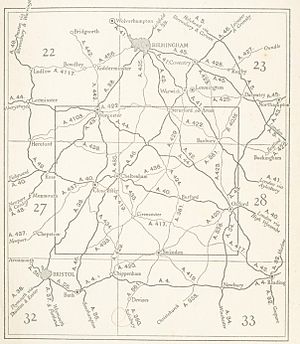 Map of Cotswolds roads from 1933

The Cotswolds lie between the M5, M40 and M4 motorways. The main non-motorway roads through the area are the A46: Bath – Stroud – Cheltenham; the A419: Swindon – Cirencester – Stroud; the A429: Cirencester – Stow-on-the-Wold – Moreton-in-Marsh; and the A40: Oxford – Burford – Cheltenham. These all roughly follow the routes of ancient roads, some laid down by the Romans, such as Ermin Way and the Fosse Way.

The area is bounded by two major rail routes: in the south by the main Bristol–Bath–London High Speed line (including the South Wales Main Line) and in the west by the Bristol–Birmingham main line. In addition, the Cotswold Line runs through the Cotswolds from Oxford to Worcester, and the Golden Valley Line runs from Swindon via Stroud to Gloucester, carrying high speed and local services.

Additionally, there is the Gloucestershire Warwickshire Railway, a steam heritage railway serving the Cotswolds from Cheltenham to Winchcombe, Toddington and Laverton. The line is being extended to Broadway.

Cheltenham, which is located just west of the Cotswolds, is a hub for National Express coach services. There are local bus services across the area, but some are infrequent.

The River Thames flows from the Cotswolds and is navigable from Inglesham and Lechlade-on-Thames downstream to Oxford.

The Cotswold region has inspired several notable English composers. In the early 1900s, Herbert Howells and Ivor Gurney used to take long walks together over the hills, and Gurney urged Howells to make the landscape, including the nearby Malvern Hills, the inspiration for his future work. Accepting, in 1916, Howells wrote his first major piece, the Piano Quartet in A minor, inspired by the magnificent view of the Malverns; he dedicated it to "the hill at Chosen (Churchdown) and Ivor Gurney who knows it".[35] Another contemporary of theirs, Gerald Finzi, lived in nearby Painswick.

Gustav Holst titled his Symphony in F major, Op.8 H47 The Cotswolds. The composer Ralph Vaughan Williams composed his opera "Hugh the Drover" from 1913 to 1924, which depicts life in a Cotswold village and incorporates local folk melodies.