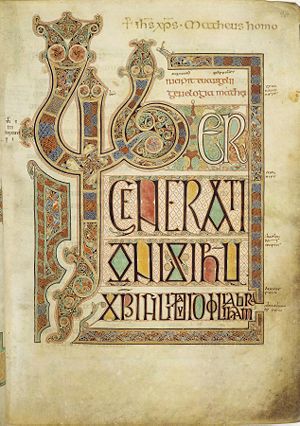 The Lindisfarne Gospels is but one of the treasures collected by Sir Robert Cotton.

The Cotton or Cottonian library was collected privately by Sir Robert Bruce Cotton MP (1571–1631), an antiquarian and bibliophile, and was the basis of the British Library. After the Dissolution of the Monasteries, many priceless and ancient manuscripts that had belonged to the monastic libraries began to be disseminated among various owners, many of whom were unaware of the cultural value of the manuscripts. Cotton's skill lay in finding, purchasing and preserving these ancient documents. The leading scholars of the era, including Francis Bacon, Walter Raleigh, and James Ussher, came to use Sir Robert's library. Richard James acted as his librarian.[1] The library is of especial importance for sometimes having preserved the only copy of a work, such as happened with Beowulf and Sir Gawain and the Green Knight.

At the time of the dissolution of monasteries, official state records and important papers were poorly kept, and often retained privately, neglected or destroyed by public officers. Sir Robert collected and bound over a hundred volumes of official papers. By 1622, Sir Robert's house and library stood immediately north of the Houses of Parliament[2] and was a valuable resource and meeting-place not only for antiquarians and scholars but also for politicians and jurists of various persuasions, including Sir Edward Coke, John Pym, John Selden, Sir John Eliot, Thomas Wentworth.

Such important evidence was highly valuable at a time when the politics of the Realm were historically disputed between the King and Parliament. Sir Robert knew his library was of vital public interest and, although he made it freely available to consult, it made him an object of hostility on the part of the government. On 3 November 1629 he was arrested for disseminating a pamphlet held to be seditious (it had actually been written fifteen years earlier by Sir Robert Dudley) and the library was closed on this pretext. Cotton was released on 15 November and the prosecution abandoned the following May, but the library remained shut up until after Sir Robert’s death; it was restored to his son and heir, Sir Thomas Cotton, in 1633.[3]

Sir Robert's library included his collection of books, manuscripts, coins and medallions. After his death the collection was maintained and added to by his son, Sir Thomas Cotton (d. 1662), and grandson, Sir John Cotton (d. 1702).

Statutory History and Gift of the Library

And whereas the said Sir John Cotton in pursuance of the Desire and Intentions of his said Father and Grandfather is content and willing that the said Mansion House and Library should continue in his Family and Name and not be sold or otherwise disposed or imbezled and that the said Library should be kept and preserved by the Name of the Cottonian Library for Publick Use & Advantage...."

The trustees removed the collections from the ruinous Cotton House, whose site is now covered by the Houses of Parliament. It went first to Essex House, The Strand, which, however, was regarded as a fire risk; and then to Ashburnham House, a little west of the Palace of Westminster. From 1707 the library also housed the Old Royal Library (now "Royal" manuscripts at the British Library). Ashburnham House also became the residence of the keeper of the king's libraries, Richard Bentley (1662-1742), a renowned theologian and classical scholar. 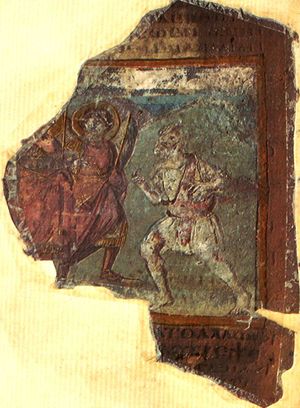 The Cotton Genesis was badly damaged in the Ashburnam House fire.

On 23 October 1731, fire broke out in Ashburnham House, and many manuscripts were lost, while others were badly singed or water-damaged: up to a quarter of the collection was either destroyed or damaged. Bentley escaped while clutching the priceless Codex Alexandrinus under one arm, a scene witnessed and later described in a letter to Charlotte, Lady Sundon, by Robert Freind, headmaster of Westminster School. The manuscript of The Battle of Maldon was destroyed, and that of Beowulf was heavily damaged.[6] Also severely damaged was the Byzantine Cotton Genesis, the illustrations of which nevertheless remain an important record of Late Antique iconography. Mr. Speaker Onslow, as one of the statutory trustees of the library, directed and personally supervised a remarkable programme of restoration within the resources of his time. The published report of this work is of major importance in bibliography.[7] Fortunately, copies had been made of some, but by no means all, of those works that were lost, and many of those damaged could be restored in the nineteenth century.

The British Museum and Library

In 1753 the Cotton library was transferred to the new British Museum, under the Act of Parliament which established it. At the same time the Sloane Collection and Harley Collection were acquired and added, so that these three became the Museum's three "foundation collections". The Royal manuscripts were donated by George II in 1757. In 1973 all these collections passed to the newly established British Library.[8]

Sir Robert Cotton had organised his library according to the case, shelf and position of a book within a room twenty-six feet long and six feet wide. Each bookcase in his library was surmounted by a bust of various historical personages, including Augustus Caesar, Cleopatra, Julius Caesar, Nero, Otho, and Vespasian. In total, he had fourteen busts, and his scheme worked by Bust-Shelf letter-Volume number from end. Thus, the two most famous of the manuscripts from the Cotton library are "Cotton Vitellius A.xv" and "Cotton Nero A.x." In Cotton's own day, that meant "Under the bust of Vitellius, top shelf (A), and count fifteen over," for the Liber Monstrorum of the Beowulf manuscript, or "Go to the bust of Nero, top shelf, tenth book" for the manuscript containing all the works of the Pearl Poet. The manuscripts are still catalogued by these call numbers in the British Library.

Main article: List of manuscripts in the Cotton library