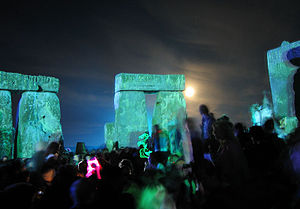 The 2005 mid-summer festival at Stonehenge

The Council of British Druid Orders is a neo-pagan group that holds ceremonies at Stonehenge. [1] Sebastian used the title, "Archdruid of Wiltshire, Chosen Chief of the Secular Order of Druids, Conservation Officer for the Council of British Druid Orders and Bard of the Gorsedd of Caer Abiri (Avebury)."[2] When he died in February 2007, Sebastion was not succeeded by "Battle Chieftian" Arthur Pendragon (born John Rothwell).[3] Pendragon lived at Stonehenge for 10 months before being evicted.[4] The group is best known for presiding at mid-summer festivals held since 1999.[5] Up to 24,000 have attended.[6] These festivals are a successor to the Stonehenge Free Festival that was held from 1974 to 1984.