Council of the North 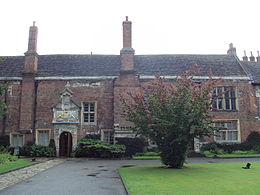 King's Manor, York — seat of the Council of the North after it was reinstated until 1641.

The Council of the North was an administrative body set up in 1472 by King Edward IV of England, the first Yorkist monarch to hold the Crown of England, to improve government control and economic prosperity, to benefit all of Northern England. Edward's brother, Richard, Duke of Gloucester (later Richard III) was its first Lord President.[1]

The Council was based in Yorkshire throughout its history: first at Sheriff Hutton Castle and at Sandal Castle, and then at King's Manor, York. Henry VIII re-established the Council after the English Reformation, when the north became identified with Roman Catholicism. It was abolished in the preamble to the English Civil War.

The Council was established in 1472 by King Edward IV of England.[1] Its chief headquarters was at Sheriff Hutton Castle and Sandal Castle.[2] It was established to administer Royal justice in the northern parts of England, including Yorkshire, Lancashire, Cumberland, Westmorland, Durham and Northumberland.[3] Richard appointed a group of local supporters to the council. It was administered from Sheriff Hutton. When Richard became king the council continued under the nominal leadership of his son Edward of Middleham. After Edward's death in 1484, Richard placed it in the hands of his new heir John de la Pole, Earl of Lincoln, who was charged with control primarily of Yorkshire.[4]

After Richard's death the council was re-established by Henry VII in 1489, nominally led by the king's young son Arthur Tudor. After Arthur's early death it existed as a sporadically constituted body to deal with pressing issues.[3] Most of the administration of the north was handled by the king's mother Margaret Beaufort via a council based in the Midlands.[3]

The Council was re-established by Henry VIII in 1537, after a period when the north was governed by a less formally constituted council led by Henry Fitzroy.[3][5] Resistance to the Reformation was the spur to the recreation of the council.

Resentment arose in the North following the English Reformation, the Church of England's split from Rome and the dissolution of the Monasteries. In the North, most people remained staunch supporters of the Roman Catholic faith and were deeply unhappy with the changes. The people rose up in York creating a 30,000 strong rebel Catholic army carrying crosses and banners depicting the Holy Wounds; this movement became known as the Pilgrimage of Grace.

It was promised that the rebels would be pardoned and a parliament would be held in York to discuss their demands; the rebels, convinced that the monasteries would be reopened, returned to their homes. However, as soon as they had disbanded, Henry had the rebel leaders arrested and executed 200 of the people involved. Following the suppression of the Pilgrimage of Grace, the Council was reorganised again in 1538 under Robert Holgate as President.[5] It organised four sessions annually, in York, Durham, Newcastle and Hull.[3]

After the dissolution of St Mary's Abbey, York (founded by the Lord of Richmond), the abbot's house was retained by the king who formally allocated it to the Council in 1539. The building is nowadays called the King's Manor.[5]

In 1620 Thomas Wentworth gave a famous speech to the council in which he emphasised the "authority of the king" as the basis for social order: "the keystone which closeth up the arch of government".[6] Nevertheless, by 1640 the council was no longer perceived as an agent of centralising Royal power in the north, but as a potential locus of resistance. Edward Hyde advocated the abolition of the council. In 1641 the Long Parliament abolished the Council for reasons relating to the Reformation: the Council was the chief support for Catholic Recusants.[7]

List of Presidents of the Council of the North