The Council on Tall Buildings and Urban Habitat (CTBUH) is an international body in the field of tall buildings and sustainable urban design. A non-profit organization[5] based at the Illinois Institute of Technology in the city of Chicago, Illinois, United States, the CTBUH announces the title of "The World's Tallest Building" and is widely considered to be an authority[6][7][8][9][10] on the official height of tall buildings. Its stated mission is to study and report "on all aspects of the planning, design, and construction of tall buildings." The Council was founded at Lehigh University in 1969 by Lynn S. Beedle, where its office remained until October 2003, when it moved to the Illinois Institute of Technology in Chicago.[11]

See also: List of tallest buildings and structures in the world

A category measuring to the top of the roof was removed from the ranking criteria in November 2009.[13] This is because flat-topped skyscrapers are not as common in the modern era as skyscrapers with intricate spire designs and parapet features atop their roofs, making it more difficult to define the roof of a building.

The CTBUH maintains an extensive database of the tallest buildings in the world, organized by various categories. Buildings under construction are also included, although not ranked until completion. The CTBUH also produces an annual list of the ten tallest buildings completed in that particular year. Topping the 2008 list was the 492-metre (1,614 ft) Shanghai World Financial Center in Shanghai, the then tallest building in the world according to the criteria of highest occupied floor, and home to the world's highest observation deck. Second on the 2008 list was the 363-metre (1,191 ft) Almas Tower in Dubai, third was the Minsheng Bank Building in Wuhan which stands at 331 metres (1,086 ft), whilst fourth was The Address Downtown Burj Dubai (306 metres (1,004 ft)). All in all, six of the ten tallest buildings completed in 2008 are located in Asia, three in the Middle East and one in North America.

The CTBUH also hosts annual conferences and a World Congress every three to five years. The most recent World Congress was held in Shanghai between 19 and 21 September 2012.[14] The next World Congress will be held in Shanghai between 16 and 19 September 2014.[15] The CTBUH also bestows Tall Building Awards each year, with four regional awards to the Americas, Europe, Africa and the Middle East, and Asia and Australasia. Among these four regional awards, one is given the "Best Tall Building Award Overall." There are also two lifetime achievement awards. Starting in 2010, these awards are presented at a symposium and dinner held on the Illinois Institute of Technology's campus.[16] In 2012 the CTBUH added two new awards for Innovation and Performance.[17]

The CTBUH also publishes guidebooks, reference manuals, and monographs related to the tall building industry. In 2006 it published the book 101 of the World’s Tallest Buildings in conjunction with author and CTBUH member Georges Binder, a reference to 101 of the world’s tallest skyscrapers. It includes photos, plans, details on architects, engineers and stakeholders, and comprehensive technical data on each building. Since 2008 it has published a Best Tall Buildings book to accompany that year's awards.[21] 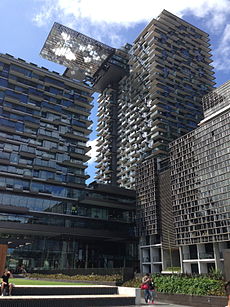 The most recent winner of the CTBUH Skyscraper Award, One Central Park in Sydney, Australia.

The CTBUH works with institutions of higher-education from around the world in researching projects related to tall building design.