Count Carl Johan Arthur Bernadotte of Wisborg, KmstkNO (originally Prince Carl Johan Arthur of Sweden, Duke of Dalarna; 31 October 1916 – 5 May 2012)[1] was the fifth and youngest child, and the fourth and youngest son, of King Gustaf VI Adolf of Sweden and Princess Margaret of Connaught.[2] He was a paternal uncle of King Carl XVI Gustaf of Sweden and a maternal uncle of Queen Margrethe II of Denmark and Queen Anne-Marie of Greece.

Bernadotte lost his succession rights to the Swedish throne and renounced his titles in 1946 when he married in New York City, New York on 19 February a woman who was not of equal rank (i.e., not of a sovereign house), the journalist Elin Kerstin Margaretha Wijkmark (Stockholm, 4 October 1910 – Båstad, 11 September 1987), daughter of Henning Wijkmark and wife Elin Larsson.

The Bernadottes lived for some time in New York, where he worked as the representative of the Anglo-Nordic Trading Company. They became friends of the film star Greta Garbo, who stayed with them in their Swedish home near Båstad.[3] 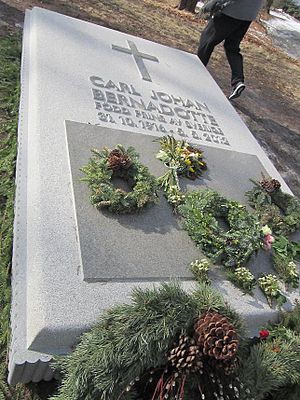 Bernadotte's grave at the Royal Cemetery north of Stockholm.

When marrying morganatically on 19 February 1946 he lost his Swedish royal titles, i.e. Prince of Sweden and Duke of Dalarna. He subsequently assumed the surname Bernadotte, the name of the Swedish Royal Family.

On 2 July 1951, for himself, his wife and his marital descendants, he was admitted by Grand Duchess Charlotte (head of state at the time) into the Nobility of Luxembourg and there as a nobleman called Carl Johan Arthur Prince Bernadotte as well as Compte de Wisborg.[4] This has been interpreted as the same right to style himself as Prince Bernadotte that his granduncle Oscar had.[5] Counts of Wisborg are considered to be part of the Swedish unintroduced nobility.

He was the chairperson of Ointroducerad Adels Förening, the association of the unintroduced nobility in Sweden, from 1948 till 1963.

On 29 June 2011, he surpassed his elder brother, Sigvard (1907-2002), as the longest-lived of Queen Victoria's male descendants.[6] He was the last surviving great-grandchild of Queen Victoria of the United Kingdom, following the 2007 death of Princess Katherine of Greece and Denmark. 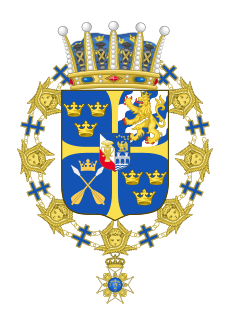 Carl Johan's coat of arms as prince of Sweden

Certain Swedish decorations were awarded at birth in 1916 and renounced in 1946.