Counts and dukes of Anjou

From Infogalactic: the planetary knowledge core
(Redirected from Count of Anjou)
Jump to: navigation, search 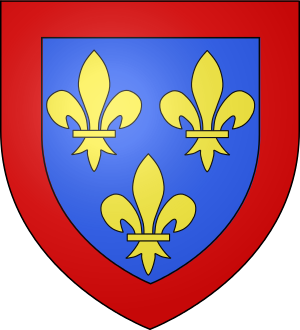 Coat of arms of the Dukes of Anjou.

The Count of Anjou was the ruler of the county of Anjou, first granted by Charles the Bald in the 9th century to Robert the Strong. Ingelger and his son were viscounts of Angers until Ingelger's son Fulk the Red assumed the title of Count of Anjou. The Robertians and their Capetian successors were distracted by wars with the Vikings and other concerns, and were unable to recover the county until the reign of Philip II Augustus more than 270 years later.

Ingelger's male line ended with Geoffrey II, Count of Anjou. Subsequent counts of Anjou were descended from Geoffrey's sister Ermengarde of Anjou and Geoffrey II, Count of Gâtinais. Their agnatic descendants, who included the Angevin kings of England, continued to hold these titles and property until the French monarchy gained control of the area. Thereafter the titles Count of Anjou and, after 1360, Duke of Anjou were granted several times, usually to members of the French ruling houses of Valois and Bourbon.

Similar to the title of Duke of York in England, none of those who received the title Duke of Anjou (except the first creation), were able to transmit it; they either died without a male heir, returned it to the crown, or succeeded to the throne.

The title was held by Philippe, a grandson of King Louis XIV, until he ascended the Spanish throne as Philip V of Spain. Since then, some Spanish legitimist claimants to the French throne have borne the title even to the present day, as does a nephew of the Orléanist pretender.

Angevin kings of England and Plantagenets

In 1204, Anjou was lost to king Philip II of France. It was re-granted as an appanage for Louis VIII's son John, who died in 1232 at the age of thirteen, and then to Louis's youngest son, Charles, later the first Angevin king of Sicily.

In 1290, Margaret married Charles of Valois, the younger brother of king Philip IV of France. He became Count of Anjou in her right.

In 1328, Philip of Valois ascended the French throne and became King Philip VI. At this time, the counties of Anjou, Maine, and Valois returned to the royal domain. On 26 April 1332, Philip granted the county to his eldest son, John:

Following John's ascension to the throne as John II in 1350, the title once again reverted to the royal domain.

On the death of Charles IV, Anjou returned to the royal domain.

Dukes of Anjou without legal creation

After the death of Henry, Count of Chambord, only the descendants of Philip V of Spain remained of the male line of Louis XIV. The most senior of these, the Carlist claimant to the Spanish throne, became the eldest of the Capetians. Some of them used the courtesy title of Duke of Anjou.

At the death of Alfonso Carlos in 1936, the Capetian seniority passed to the exiled King of Spain, Alfonso XIII. In 1941, Infante Jaime, Duke of Segovia, succeeded his father Alfonso XIII (Alphonse I of France according to the Legitimists) as the heir male of Louis XIV and therefore as the Legitimist claimant to the French throne. He then adopted the title of Duke of Anjou.

On December 8, 2004, Henry, Count of Paris, Duke of France, Orléanist Pretender to the French throne, granted his nephew Charles Philippe the title of Duke of Anjou. For him, the title was available since 1824, because he doesn't recognize his cousin's courtesy title.