From Infogalactic: the planetary knowledge core
(Redirected from Count of Namur)
Jump to: navigation, search 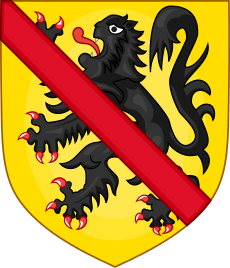 Coat of arms of the counts and margraves of Namur. 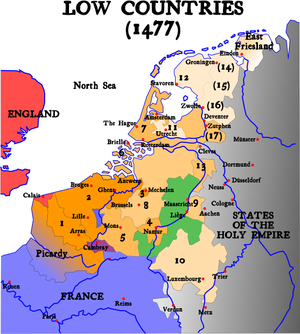 A map of the Low Countries in 1477. The County of Namur is numbered 4.

The following is a list of Counts or Margraves of Namur.

Namur was not often an independent state, rather under the dominion of other entities like the counties of Hainaut and Flanders or the Duchy of Burgundy.

Succession is from father to son, unless otherwise noted.

In 1421, John III sells his estates to Philip the Good, Duke of Burgundy.

Charles V proclaimed the Pragmatic Sanction of 1549 eternally uniting Namur with the other lordships of the Low Countries in a personal union. When the Habsburg empire was divided among the heirs of Charles V, the Low Countries, including Namur, went to Philip II of Spain, of the Spanish branch of the House of Habsburg.

Between 1706 and 1714 Namur was invaded by the English and the Dutch during the War of the Spanish Succession. The fief was claimed by the House of Habsburg and the House of Bourbon. In 1712 Luxembourg and Namur were ceded to Maximilian II Emanuel, Elector of Bavaria by his French allies, but with the end of the war in 1713 with the Treaty of Utrecht Max. Emanuel was restored as Elector of Bavaria. The Treaty of Utrecht also settled the succession, and the Margraviate of Namur went to the Austrian branch of the House of Habsburg, along with the rest of the Spanish Netherlands.

The title was factually abolished in the aftermath of the French revolution and the annexation of Namur by France in 1795. Although, the title remained officially claimed by the descendants of Leopold II until the reign of Karl I of Austria.