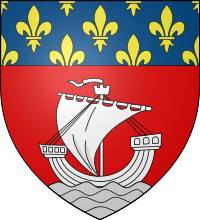 Coat of arms of Paris

Count of Paris (French: Comte de Paris) was a title for the local magnate of the district around Paris in Carolingian times. After Hugh Capet was elected King of France in 987, the title merged into the crown and fell into disuse. However, it was later revived by the Orléanist pretenders to the French throne in an attempt to evoke the legacy of Capet and his dynasty, and is currently used by Prince Henri, Count of Paris, Duke of France.

In 1838, during the July Monarchy, King Louis-Philippe I recreated the title for his newly born grandson Philippe.[1] After the Louis-Philippe abdicated during the French Revolution of 1848, Orléanist monarchists have considered Philippe and his descendants the legitimate heir to the throne. In 1870, at the beginning of the French Third Republic, Philippe and the Orléanists agreed to support the legitimist pretender, Henri, Count of Chambord, but resumed Philippe's claims after Henri's death in 1883.