From Infogalactic: the planetary knowledge core
(Redirected from Counties of Scotland)
Jump to: navigation, search 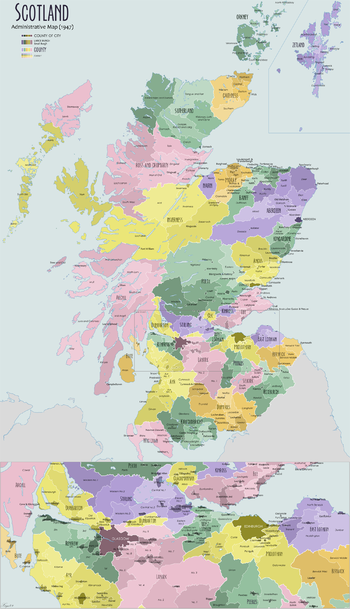 The counties, districts and burghs as they were in 1947

The counties or shires of Scotland (Scottish Gaelic: Siorrachdan na h-Alba) were the main subdivisions of Scotland from their establishment in the Middle Ages until their abolition under the Local Government (Scotland) Act 1973.

Today, local government in Scotland is based upon "council areas", which sometimes incorporate the names of old counties, but frequently have vastly different boundaries. Counties continue to be used for the purpose of lieutenancy, though the lieutenancy areas are not entirely identical to the old counties.[1] The old boundaries are still used for land registration purposes.[2]

Malcolm III (reigned 1058 to 1093) appears to have introduced sheriffs as part of a policy of replacing native "Celtic" forms of government with Norman feudal structures.[3]

This policy was continued by Edgar (reigned 1097 to 1107), Alexander I (reigned 1107 to 1124), and in particular David I (reigned 1124 to 1153). David completed the division of the country into sheriffdoms by the conversion of existing thanedoms.[4] The earliest sheriffdom south of the Forth which we know of for certain is Haddingtonshire, which is named in a charters of 1139 as Hadintunschira[5] and in another of 1141 as Hadintunshire.[6] Stirlingshire appears in a charter of 1150 under the name Striuelinschire.[7]

The shires of the Highlands were completed only in the reign of King Charles I (reigned 1625 to 1649).

In 1305 Edward I of England, who had deposed John Balliol issued an Ordinance for the Government of Scotland. The document listed the twenty-three shires then existing and either appointed new sheriffs or continued heritable sheriffs in office.[4]

^Note a : Gospatric was mentioned as sheriff in a number of charters of Earl David.[8][9] The shire was not listed in the ordinance, and in 1305 appears to have been partly under the jurisdiction of the Sheriff of Selkirk, with the remainder comprised in the constabularies of Jedburgh and Roxburgh under the jurisdiction of the constable of Berwick.[10] The shire was one of those surrendered to Edward III of England in 1334.[11]

The remaining shires were formed either by the territorial expansion of the Kingdom of Scotland, or by the subdivision of existing sheriffdoms. Many of the new shires had highly irregular boundaries or detached parts as they united the various possessions of the heritable sheriffs.

^Note b : In 1583 the Earl of Huntly, hereditary sheriff of Inverness, granted the Earl of Sutherland jurisdiction over the sheriffdom of Sutherland and Strathnaver. This was only the south-eastern area of the later county, with Halladale River forming the boundary. The shire was formed in 1631 by Crown Writ of Charles I, severing Sutherland from Inverness. The new county comprised the Earldom of Sutherland along with Assynt and the baronies between Ross and Caithness. Dornoch was appointed the head burgh of the shire. The writ was confirmed by the Parliament of Scotland in 1633.[16]

The 1707 Act of Union and the ending of heritable jurisdictions

Following the union of Scotland with England, the government began bringing Scotland's local governance into line with the rest of Great Britain. The full machinery of county government was not immediately established, largely due to the fact that the office of sheriff or steward had become hereditary in certain families in the majority of sheriffdoms. At the accession of George II twenty-two sheriffs were hereditary, three were appointed for life and only eight held office at the pleasure of the monarch. The heritable sheriffdoms were Argyll, Bute, Banff, Caithness, Clackmannan, Cromarty, Dumbarton, Dumfries, Elgin, Fife, Kinross, Kirkcudbright, Linlithgow, Nairn, Orkney & Zetland, Peebles, Renfrew, Roxburgh, Selkirk, Sutherland, Stirling and Wigtown; those appointed for life were Perth, Forfar and Ayr; those held at pleasure were Aberdeen, Berwick, Edinburgh, Haddington, Inverness, Kincardine, Lanark and Ross.[17] Following the unsuccessful Jacobite Rising of 1745 the government took the opportunity of overhauling county government. The Heritable Jurisdictions Act 1747 revested the government of the shires in the Crown, compensating those office holders who were displaced. The Sheriffs (Scotland) Act 1747 reduced the office of sheriff principal to a largely ceremonial one, with a sheriff depute or sheriff substitute appointed to each "county, shire or stewartry". Twelve of the smallest counties were paired to form sheriffdoms, a process of amalgamation that was to continue until the twentieth century.[18] In 1794 Lord-Lieutenants were appointed to each county, and in 1797 county militia regiments were raised, bringing Scotland into line with England, Wales and Ireland.

In official documents shires were referred to as the Shire of X, rather than X Shire. The latter was more common in general usage. Thus in parliamentary proceedings one may find, for example, a heading referring to "Act for the shirrefdome of Dumbartane" but the text "the sevine kirkis to Dumbartane schyr"[19]

The first accurate county maps of Scotland appear in the late seventeenth century and contain a first-hand record of shire names. John Adair (maps c. 1682) gives the names of Midlothian, East Lothian, Twaddall and Wast Lothian (the latter also as "Linlithgowshire"[20]). The eighteenth century county maps of Herman Moll (dated c. 1745), preferred to keep the "Shire" suffix a separate word, as for example "Berwick Shire", "Roxburgh Shire", "the Shire of Selkirk otherwise known as Etterick Forest", and in the north to "Murray" (Moray), "Inverness Shire", "Aberdeen Shire", "Banff Shire", "Ross Shire".[21] The map of Boswell's and Johnson's A Journey to the Western Islands of Scotland (1773) gives "Shire" to every one shown, including "Angus Shire" and "Fife Shire".

Several shires have alternative names of long standing. These include:

In Scotland, as in England and Wales, the terms "shire" and "county" have been used interchangeably, with the latter becoming more common in later usage. Today, "county" is generally seen as the official term, with "shire" being a poetic or archaic variant.[citation needed]

It may be noted that the map depicts a large number of exclaves physically detached from the county that they were politically deemed to be part of. Cromartyshire's borders, a particularly fragmentary example, were achieved as late as 1685, although at that time the word "county" was not applied to the sheriffdom. 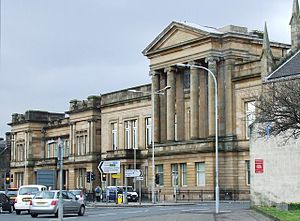 The county buildings in Paisley, formerly the seat of Renfrew County Council

From the 17th century the shires (counties) started to be used for local administration apart from judicial functions. In 1667 Commissioners of Supply were appointed in each sheriffdom to collect the land tax.[22] The commissioners eventually assumed other duties in the county.

In 1858 police forces were established in each county under the Police (Scotland) Act 1857. It should be noted, however, that burghs were largely outside the jurisdiction of county authorities.

Under the Local Government (Scotland) Act 1889, thirty-four county councils were formed. The areas governed by these councils, referred to as "administrative counties", resembled the traditional shires of Scotland, but not entirely. Exclaves were abolished, with the exception of one exclave of Dunbartonshire. Ross-shire and Cromartyshire were merged into Ross and Cromarty, and four cities - Aberdeen, Dundee, Edinburgh and Glasgow - were made counties in their own right. These "counties of cities" were periodically expanded, as their urban areas spread further and further into the surrounding countryside. In general, they were still considered part of the wider geographical county; for instance, Glasgow was still reckoned part of Lanarkshire, though it was no longer within the jurisdiction of Lanark County Council.

Under the Local Government (Scotland) Act 1929, two pairs of councils were combined with each other to form the "joint county councils" of Perth & Kinross and Moray & Nairn. Though governed by the same council, each county remained nominally independent from the other.

In 1963 the Government published a white paper which proposed a reduction in the number of counties from thirty-three to between ten and fifteen.[23] A process of consultation between county councils and officials from the Scottish Office was begun to affect the amalgamations. Following a change of government, it was announced in 1965 that a "more comprehensive and authoritative" review of local government areas would be undertaken.[24]

In 1966 a Royal Commission on Local Government in Scotland, chaired by Lord Wheatley was appointed.[25] The commission's report in 1969 recommended the replacement of the counties with larger regions.[26]

In 1970 another change in government control was followed by the publication of a white paper in 1971 implementing the commission's reforms in a modified form.[27] The abolition of counties "for local government purposes" was enacted by the Local Government (Scotland) Act 1973, with counties playing no part in local government after 16 May 1975, being replaced by regions and districts.

Local government was reorganised again under the Local Government etc. (Scotland) Act 1994, with the regions and districts being replaced by the currently existing council areas. These councils are unitary, meaning they undertake all local governance within their area, though "community councils" do operate in several towns.