County Armagh (named after its county town, Armagh) is one of six counties that form Northern Ireland and one of the 32 traditional counties of Ireland, situated in the northeast of the island. Adjoined to the southern shore of Lough Neagh, the county covers an area of 1,326 km²[4] and has a population of about 174,792. It is within the historic province of Ulster. County Armagh is known as the "Orchard County" because of its many apple orchards.[5]

The name "Armagh" derives from the Irish word Ard meaning "height" and Macha, together meaning "height" (or high place) and Macha. Macha is mentioned in the Book of the Taking of Ireland, and is also said to have been responsible for the construction of the hill site of Emain Macha (now Navan Fort near Armagh City) to serve as the capital of the Ulaid kings (who give their name to Ulster), also thought to be Macha's height.

From its highest point at Slieve Gullion, in the south of the County, Armagh's land falls away from its rugged south with Carrigatuke, Lislea and Camlough mountains, to rolling drumlin country in the middle and west of the county and finally flatlands in the north where rolling flats and small hills reach sea level at Lough Neagh. 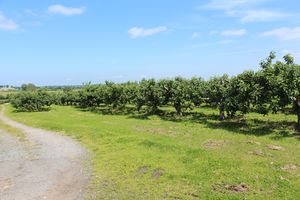 County Armagh's boundary with Louth is marked by the rugged Ring of Gullion rising in the south of the county whilst much of its boundary with Monaghan and Down goes unnoticed with seamless continuance of drumlins and small lakes. The River Blackwater marks the border with County Tyrone and Lough Neagh otherwise marks out the County's northern boundary.

Despite lying in the east of Ireland, Armagh enjoys an oceanic climate strongly influenced by the Gulf Stream with damp mild winters, and temperate, wet summers. Overall temperatures rarely drop below freezing during daylight hours, though frost is not infrequent in the months November to February. Snow rarely lies for longer than a few hours even in the elevated south-east of the County. Summers are mild and wet and although with sunshine often interspersed with showers, daylight lasts for almost 18 hours during high-summer.

Ancient Armagh was the territory of the Ulaid (also known as Voluntii, Ultonians, Ulidians, Ulstermen) before the fourth century AD. It was ruled by the Red Branch, whose capital was Emain Macha (or Navan Fort) near Armagh. The site, and subsequently the city, were named after the goddess Macha. The Red Branch play an important role in the Ulster Cycle, as well as the Cattle Raid of Cooley. However, they were eventually driven out of the area by the Three Collas, who invaded in the 4th century and held power until the 12th. The Clan Colla ruled the area known as Airghialla or Oriel for these 800 years.

The chief Irish septs of the county were descendants of the Collas, the O'Hanlons and MacCanns, and the Ui Neill, the O'Neills of Fews. Armagh was divided into several baronies: Armagh was held by the O'Rogans, Lower Fews was held by O'Neill of the Fews, and Upper Fews were under governance of the O'Larkins, who were later displaced by the MacCanns. Oneilland East was the territory of the O'Garveys, who were also displaced by the MacCanns. Oneilland West, like Oneilland East, was once O'Neill territory, until it was then held by the MacCanns, who were Lords of Clanbrassil. Upper and Lower Orior were O'Hanlon territory. Tiranny was ruled by Ronaghan. Miscellaneous tracts of land were ruled by O'Kelaghan. The area around the base of Slieve Guillion near Newry also became home to a large number of the McGuinness clan as they were dispossessed of hereditary lands held in the County Down.

Armagh was the seat of St. Patrick, and the Catholic Church continues to be his see. County Armagh is presently one of four counties of Northern Ireland to have a majority of the population from a Catholic background, according to the 2011 census.

The southern part of the County has been a stronghold of support for the IRA, earning it the nickname "Bandit Country" though this is widely regarded as an untrue media label that has resulted in the vilification and demonisation of the local community.[13] South Armagh is predominantly nationalist, with most of the population being opposed to any form of British presence, especially that of a military nature. See Provisional IRA South Armagh Brigade for further information.

On 10 March 2009, the CIRA claimed responsibility for the fatal shooting of a PSNI officer in Craigavon, County Armagh—the first police fatality in Northern Ireland since 1998. The officer was fatally shot by a sniper as he and a colleague investigated "suspicious activity" at a house nearby when a window was smashed by youths causing the occupant to phone the police. The PSNI officers responded to the emergency call, giving a CIRA sniper the chance to shoot and kill officer Stephen Carroll.[14][15]

County Armagh is no longer used as an administrative district for local Government purposes, however, it remains officially used for purposes such as a Lieutenancy area – the county retains a lord lieutenant who acts as representative of the British Monarch in the County.[16]

County Armagh ceased to serve as a local government unit in 1973 and currently the county is divided into four district councils for local government purposes, namely Armagh City and District Council, most of Craigavon Borough Council, approximately the western third of Newry and Mourne District Council and a part of Dungannon and South Tyrone Borough Council, centred around Peatlands Park. As such, Armagh is one of the four counties of Northern Ireland presently to have a majority of the population from a Catholic background, according to the 2011 census.

With the proposed reform of local government in Northern Ireland in 2011, County Armagh would have comprised part of two new council areas, Armagh City and Bann District, and Newry City and Down, however, that reform has not proceeded to date.

Armagh has ceased to serve as an electoral constituency in 1983 but remains the core of the Newry and Armagh (UK Parliament constituency) and Newry & Armagh Northern Ireland Assembly electoral constituencies. County Armagh also remains as a district for legal and property purposes; however, its baronies no longer have any administrative use.

The -XZ suffix is currently used on vehicle registration plates for vehicles registered in County Armagh. County Armagh is traversed by two major highways – the M1 linking Belfast to Dungannon crosses the north of the county whilst the A1/N1 from Belfast to Dublin runs in the far south east. Armagh has numerous local roads connecting settlements in the county.

Armagh once had a well-developed railway network with connections to, among others, Armagh City, Culloville, Goraghwood, Markethill, Vernersbridge, Tynan (see History of rail transport in Ireland ) but today only Newry (Bessbrook), Portadown, Poyntzpass, Scarva, and Lurgan are served by rail.

Ulsterbus provides the most extensive public transport system within the county, including frequent bus transfers daily from most towns to Belfast. Northern Ireland Railways / Iarnród Éireann's Enterprise service provides connections to Dublin in little over an hour and Belfast in little over forty minutes several times daily.

County Armagh is traversed by the Ulster Canal and the Newry Canal which are not fully open to navigation.

The Armagh County Board of the Gaelic Athletic Association or Armagh GAA organises Gaelic games in the county.

Most common surnames in County Armagh at the time of the United Kingdom Census of 1901,[22] by order of incidence: