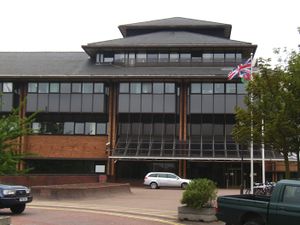 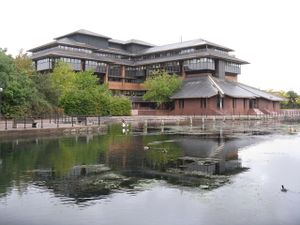 The County Hall is the head office of Cardiff Council (formerly South Glamorgan County Council), located beside the disused Bute East Dock in the Atlantic Wharf area of Butetown, Cardiff.

The building was designed by J.R.C. Bethell, the County Architect for South Glamorgan, and built 1986-7.[1] This was at a time when the surrounding area consisted mainly of post-industrial dereliction. Hence the construction of the new building has been described in Buildings of Wales: Glamorgan as a "remarkable gesture of faith [by] the South Glamorgan County Council".[2] It is seen as representative of a new form of civic building that does not dominate its surroundings by its size, or formal language, to the extent that it could "even [be] a deliberate abregation of the arrogant assertiveness of the late C19, expressed across the water".[1]

County Hall was officially opened by the Right Honourable Lord Callaghan of Cardiff KG, in October 1988.[3]

The building is generally three storeys in height, but rises to four and five storeys in places. The distinctive shallow pitch roofs are of black slate. In plan the building is formed around a central courtyard.[1]

County Hall is the main headquarters of Cardiff Council. It is home to many of the Council's departments.[4]

The Cardiff Council Camera Control Room is also located at County Hall, where operators use CCTV to monitor locations across the city in an attempt to stop fly-tipping and other criminal activity.[6]

County Hall is also marketed as a venue for conferences, weddings and other events. It boasts an in-house catering team, a large bar for refreshments and function suites to accommodate up to 300 people.[7]

In September 2007, former Council chief executive Byron Davies unveiled plans aimed at massive efficiency improvements and bringing in additional funding, which could include selling County Hall, the Cardiff Heliport and up to 40% of Cardiff Bus.[8]

As at the end of 2009 no specific proposals to implement these ideas had been brought forward by the Council.

In 2013 the sale and demolition of County Hall was again raised, as part of Cardiff Council's plans to reduce their property commitments. It was suggested an indoor arena and convention centre could be built on the site.[9]