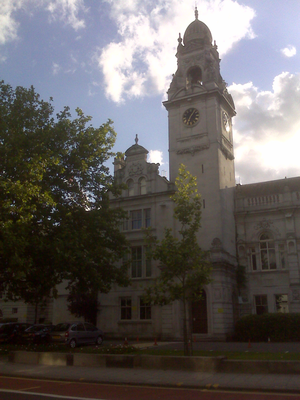 County Hall is the main government building for Surrey County Council in England. It was opened 13 November 1893, and is located in Kingston upon Thames. County Hall is a landmark in Kingston and contains a clock tower entrance, sculptures, plaques of Surrey MPs and Lord Sheriffs, and the council chamber. It is located on Penrhyn Road, named in honour of the first chairman of the county council.

Surrey had been administered from Newington since the 1790s, and the county council was initially based in the sessions house there. As Newington was included in the County of London from 1889 it lay outside the area administered by the council, and a site for a new county hall within the administrative county was sought. By 1890 six towns were being considered: Epsom, Guildford, Kingston, Redhill, Surbiton and Wimbledon.[1] A decision to build the new County Hall at Kingston was made in 1891, and the building opened in 1893.[2]

The county hall in Kingston was designed by Charles Henry Howell, County Surveyor and partner in Howell and Brooks. It was built by the firm Higgs and Hill.[2] It was built between 1891 and 1893. It was opened on 13 November 1893, with bands entertaining invited guests. The building was extended in 1930 (opened by the Duke of Gloucester) and again in 1938, the Ashcombe Block, creating a quadrangle behind the entrance. The Ashcombe block was destroyed by a flying bomb in July 1944, and rebuilt in 1953. The building was further extended in 1963 and 1982, completing a second quadrangle.

Due to local government reorganisation in 1965, County Hall is now no longer within the administrative county of Surrey, but within the Royal Borough of Kingston upon Thames in Greater London. In July 2003 it was decided[3] to move county government to a new building in Woking and Kingston University planned to acquire County Hall. However, the project was scrapped[4] in January 2006.