County Tipperary (Irish: Contae Thiobraid Árann) is a county in Ireland. Tipperary County Council is the local government authority for the county. Between 1838 and 2014 county Tipperary was divided into two ridings/ counties, North Tipperary and South Tipperary, which were reunified under the Local Government Reform Act 2014, which came into effect following the 2014 local elections on 3 June 2014.[1] It is located in the province of Munster. The county is named after the town of Tipperary, and was established in the early thirteenth century, shortly after the Norman invasion of Ireland. The population of the entire county was 158,754 at the 2011 census.[2] The largest towns are Clonmel, Nenagh and Thurles. 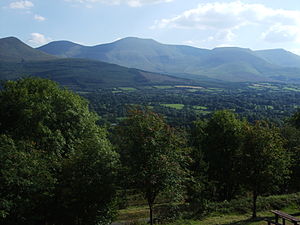 The Galtee Mountains seen from the Glen of Aherlow.

Tipperary is the sixth largest of the 32 counties by area and the 11th largest by population.[3] It is the third largest of Munster’s 6 counties by size and the third largest by population. The region is part of the central plain of Ireland, but the diversified terrain contains several mountain ranges: the Knockmealdown, the Galtee, the Arra Hills and the Silvermine Mountains. The southern portion of the county is drained by the River Suir; the northern by tributaries of the Shannon which widens into Lough Derg. No part of the county touches the coast. The centre is known as 'the Golden Vale', a rich pastoral stretch of land in the Suir basin which extends into counties Limerick and Cork.

Parishes were delineated after the Down Survey as an intermediate subdivision, with multiple townlands per parish and multiple parishes per barony. The civil parishes had some use in local taxation and were included on the nineteenth century maps of the Ordnance Survey of Ireland.[4] For poor law purposes, District Electoral Divisions replaced the civil parishes in the mid-nineteenth century. There are 199 civil parishes in the county.[5] Townlands are the smallest officially defined geographical divisions in Ireland; there are 3,159 townlands in the county.[6] 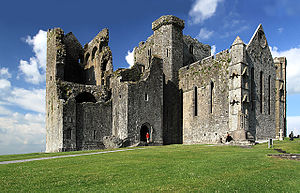 The Rock of Cashel, seat of the Kings of Munster

Following the Norman invasion of Ireland, the Kingdom of Munster was claimed as a lordship. By 1210, the sheriffdom of Munster shired into the shires of Tipperary and Limerick.[13] In 1328, Tipperary was granted to the Earls of Ormond as a county palatine or liberty.[13] The grant excluded church lands such as the archiepiscopal see of Cashel, which formed the separate county of Cross Tipperary.[13] Though the Earls gained jurisdiction over the church lands in 1662, "Tipperary and Cross Tipperary" were not definitively united until the County Palatine of Tipperary Act 1715, when the 2nd Duke of Ormond was attainted for supporting the Jacobite rising of 1715.[14][15]

The county was divided once again in 1838.[16] The county town of Clonmel, where the grand jury held its twice-yearly assizes, is at the southern limit of the county, and roads leading north were poor, making the journey inconvenient for jurors resident there.[16] A petition to move the county town to a more central location was opposed by the MP for Clonmel, so instead the county was split into two "ridings"; the grand jury of the South Riding continued to meet in Clonmel, while that of the North Riding met in Nenagh.[16] When the Local Government (Ireland) Act 1898 established county councils to replace the grand jury for civil functions, the ridings became separate "administrative counties" with separate county councils.[16] Their names were changed from "Tipperary North/South Riding" to "North/South Tipperary" by the Local Government Act 2001, which redesignated all "administrative counties" as simply "counties".[17] The Local Government Reform Act 2014 has amalgamated the two counties and restored a single county of Tipperary.[18]

Tipperary is referred to as the "Premier County", a description attributed[citation needed] to Thomas Davis, Editor of The Nation newspaper in the 1840s as a tribute to the nationalistic feeling in Tipperary and said[citation needed] that "where Tipperary leads, Ireland follows". Tipperary was the subject of the famous song "It's a Long Way to Tipperary" written by Jack Judge, whose grandparents came from the county. It was popular with regiments of the British army during World War I. The song "Slievenamon", which is traditionally associated with the county, was written by Charles Kickham from Mullinahone, and is commonly sung at sporting fixtures involving the county.[19]

The area around Clonmel is the economic hub of the county: to the west of the town the manufacturers Bulmers (brewers) and Merck & Co. (pharmaceuticals). There is much fertile land, especially in the region known as the Golden Vale, one of the richest agricultural areas in Ireland. Dairy farming and cattle raising are the principal occupations.[citation needed] Other industries are slate quarrying and the manufacture of meal and flour.

Tipperary is famous for its horse breeding industry and is the home of Coolmore Stud, the largest thoroughbred breeding operation in the world.[citation needed]

Road transport dominates in County Tipperary. The M7 motorway crosses the north of the county through Roscrea and Nenagh and the M8 motorway bisects the county from north of Two-Mile Borris to the County Limerick border. Both routes are amongst some of the busiest roads on the island. The Limerick to Waterford N24 crosses the southern half of Tipperary, travelling through Tipperary Town, Bansha, north of Cahir and around Clonmel and Carrick-on-Suir.

Tipperary also has a number of railway stations situated on the Dublin-Cork line, Dublin-to-Limerick and Limerick-Waterford line. The railway lines connect places in Tipperary with Cork, Dublin Heuston, Waterford, Limerick, Mallow and Galway.

County Tipperary has a strong association with the Gaelic Athletic Association which was founded in Thurles in 1884. The Gaelic Games of Hurling, Gaelic football, Camogie and Handball are organised by the Tipperary GAA County Board of the GAA. The organisation competes in the All-Ireland Senior Hurling Championship and the All-Ireland Senior Football Championship. Tipperary, with 26 wins, are the only county to have won an all-Ireland title in evey decade since the 1880s. 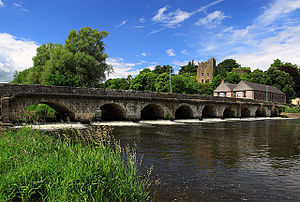