From Infogalactic: the planetary knowledge core
Jump to: navigation, search
This article is about the county in Scotland. For other uses of the term, see Bute (disambiguation).

The County of Bute or Buteshire (Scottish Gaelic: Siorrachd Bhòid) is one of the registration counties of Scotland.[1]

Buteshire was also a local government county of Scotland with its own elected county council from 1890 to 1975. The council area comprised a number of islands in the Firth of Clyde, between the local government counties of Argyll and Ayrshire, the principal islands being Bute, Arran, Great Cumbrae and Little Cumbrae. The county town was Rothesay, located on the Isle of Bute.

Bute had its own elected local government Council from 1890 to 1975. However, in 1975 this system was superseded and Buteshire was divided between the Argyll and Cunninghame districts of the Strathclyde Region. The island of Bute itself became part of Argyll whilst Arran and the Cumbraes became part of Cunninghame.

In 1996 as a result of local government council reorganisation when unitary council areas were superseded and new councils created, Bute became part of Argyll and Bute, and the other islands are now within North Ayrshire.

In 1983, eight years after Scottish local government counties had been abolished, the Bute and Northern Ayrshire constituency was divided between the Argyll and Bute constituency and the Cunninghame North constituency.

In 2005, both constituencies were enlarged as part of the Fifth Periodic Review of Westminster constituencies.[2] The name "Argyll and Bute" was retained, while the enlarged Cunningham North was named North Ayrshire and Arran.

Constituencies with similar boundaries to the pre-2005 constituencies, and also called Argyll and Bute and Cunninghame North, are used by the Scottish Parliament. 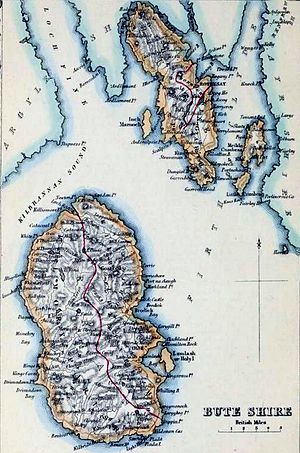