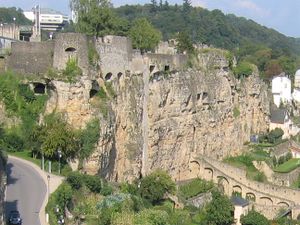 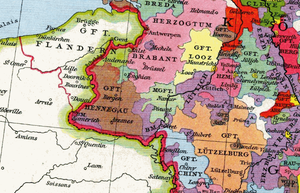 The County of Luxemburg (French: Luxembourg, Luxembourgish: Lëtzebuerg) was a State of the Holy Roman Empire. It arose from medieval Lucilinburhuc (Lützelburg) Castle in the present-day City of Luxembourg, purchased by Count Siegfried in 963. His descendants of the Ardennes-Verdun dynasty (Wigeriche) began to call themselves Counts of Luxembourg from the 11th century onwards. The House of Luxembourg, a cadet branch of the Dukes of Limburg, became one of the most important political forces of the 14th century, contending with the House of Habsburg for supremacy in Central Europe.[1]

The historic region of Luxembourg was settled by Celtic tribes since the 2nd Century. After the conquests of Julius Caesar during the Gallic Wars from 58 to 51 BC, it was incorporated into the Roman province of Germania Inferior. Upon the invasion of Germanic Franks from the East during the Migration Period in the 5th century, the Luxembourg region became part of Francia and the Carolingian Empire. According to the 843 Treaty of Verdun it first fell to Middle Francia, became part of Lotharingia by the 855 Treaty of Prüm, and of Upper Lorraine in 959. Since 925 it has belonged to East Francia, predecessor of the Kingdom of Germany and the Holy Roman Empire. Large parts where then held by the Abbey of Echternach.

Modern historians believe that the etymology of the word Luxembourg is a derivation of the word Letze, meaning fortification,[citation needed] which might have referred to either the remains of a Roman watchtower or to a primitive refuge of the Early Middle Ages. The first known reference to the territory was by Julius Caesar in his Commentaries on the Gallic War,[2] the name usually translated from the Latin as "little castle". From the Early Middle Ages to the Renaissance, authors attributed different names to Luxembourg, such as Lucilinburhuc, Lutzburg, Lützelburg, Luccelemburc, Lichtburg.

The ruined, supposedly Roman, fortification called Lucilinburhuc was first mentioned in 963, when Count Siegfried acquired it from Wikerus, Abbot of St. Maximin's Abbey in Trier. Siegfried first appeared about 950, he possibly was a son of Duke Gilbert of Lorraine, his mother Cunigunda was a granddaughter of the West Frankish King Louis the Stammerer. In the following years, Siegfried built a new castle on the site of the ruins, on a rock later called "Bockfiels." The castle dominated a stretch of the old Roman road linking Reims, Arlon and Trier that provided prospects for trade and taxation. Although the history of Luxembourg began with the castle's construction, it seems that Siegfried and his immediate successors did not make the castle their primary residence.

During the following years, a small town and market grew around the new castle. Its first inhabitants were probably servants of Count Siegfried and clergy of Saint Michael's Church. The settlement soon received additional protection by the construction of a first and partial city wall and moat. In addition to the small town near the Bockfiels and the Roman road, a further settlement was established in the Alzette Valley, today the Grund quarter of Luxembourg.

By 1060 the fortress had been extended by Siegfried's descendants. Conrad I (d. 1086) was the first to call himself a "Count of Luxembourg". His son Henry III was the first count known to have established his permanent residence there, as in a 1089 document, he is referred to as "comes Henricus de Lutzeleburg". By 1083 this lower town contained two churches o bridges over the Alzette and Petruss rivers. Its inhabitants' occupations included fishing, baking, and milling. The same year, the Benedictine abbey of Altmünster was founded on the hill behind the castle by Conrad I, Count of Luxembourg.

When in 1136 Count Conrad II of Luxembourg died without heirs, the Ardennes-Luxembourg branch became extinct and the county, by order of Emperor Lothair II, passed to Conrad's maternal cousin Henry the Blind from the House of Namur. Upon his death in 1196 Henry left one daughter Ermesinde, who had to cope with the claims raised by Count Otto I of Burgundy, a son of the Hohenstaufen emperor Frederick Barbarossa. By marrying Count Theobald I of Bar she could secure her own succession as Countess of Luxembourg. Her second marriage with Waleran III from the House of Limburg-Arlon in 1214 laid the foundations of the rise of the Luxembourg dynasty.

The town of Luxembourg became the centre of a state of strategic value in the Low Countries. Its fortifications were steadily enlarged and strengthened over the years by successive owners, which made it one of the strongest fortresses in Europe. Through its formidable defences it became known as the "Gibraltar of the North". The Luxembourg counts lost the Limburg heritage when they were defeated by the Dukes of Brabant in the 1288 Battle of Worringen, nevertheless Count Henry VII, whose father Henry VI had been killed in battle, settled the quarrel by marrying Margaret of Brabant in 1292. In 1308 he was elected King of the Romans and was crowned Holy Roman Emperor in 1312, the first of three emperors provided by the House of Luxembourg. His son John the Blind became King of Bohemia in 1310, whereafter the dynasty moved their seat of power to Prague Castle.

The Duchy of Luxembourg was formed when the counties of Luxembourg, Durbuy, Laroche and Vianden (a vassal county since 31 July 1264), the Marquisat of Arlon and the districts of Thionville, Bitburg and Marville were combined. Luxembourg had remained an independent fief of the Holy Roman Empire until 1353, when the Luxembourg emperor Charles IV elevated it to the status of a duchy for his half-brother Wenceslaus.

Upon the extinction of the Luxembourg dynasty, the duchy passed to the House of Valois-Burgundy in 1443, and then to the Habsburg archdukes Archduchy of Austria in 1482. It was integrated into the Burgundian Circle of the Holy Roman Empire, by Emperor Charles V in the Pragmatic Sanction of 1549. During the French Revolutionary Wars Luxembourg was annexed to the department of Forêts. Following agreement at the 1815 Congress of Vienna the duchy became a Grand Duchy under the rule of, but not part of, William I's Netherlands, after which it joined the German Confederation.