From Infogalactic: the planetary knowledge core
Jump to: navigation, search
"Eighteenth Brumaire" redirects here. For Karl Marx’s work about the French coup of 1851, see The Eighteenth Brumaire of Louis Napoleon.

The coup of 18 Brumaire brought General Napoleon Bonaparte to power as First Consul of France, and, in the view of most historians, ended the French Revolution. This bloodless coup d'état overthrew the Directory, replacing it with the French Consulate. This occurred on 9 November 1799, which was 18 Brumaire, Year VIII under the French Republican Calendar.

After Austria declared war on 12 March 1799, France returned to a war footing. Emergency measures were adopted and the pro-war Jacobin faction triumphed in the April election. With Napoleon and the republic's best army in Egypt, France suffered a series of reverses on the battlefield in the spring and summer of 1799. The coup of 30 Prairial (18 June) ousted the Jacobins and left Abbé Sieyès, a member of the five-man ruling Directory, the dominant figure in the government. France's military situation improved following the Second Battle of Zurich, fought on 25–26 September. As the prospect of invasion receded, the Jacobins feared a revival of the pro-peace Royalist faction. When Napoleon returned to France on 9 October, both factions hailed him as the country's savior.

Dazzled by Napoleon's campaign in the Middle East, the public received him with an ardor that convinced Sieyès he had found the general indispensable to his planned coup.[1] However, from the moment of his return, Napoleon plotted a coup within the coup, ultimately gaining power for himself rather than Sieyès.

Perhaps the gravest potential obstacles to a coup were in the army. Some generals, such as Jean-Baptiste Jourdan, honestly believed in republicanism; others, such as Jean Bernadotte, believed themselves capable of governing France. Napoleon worked on the feelings of all, keeping secret his own intentions.[1]

Prior to the coup, troops were conveniently deployed around Paris. The plan was, first, to persuade the Directors to resign, then, second, to get the Council of Ancients and the Council of Five Hundred (the upper and lower houses of the legislature) to appoint a pliant commission that would draw up a new constitution to the plotters' specifications. 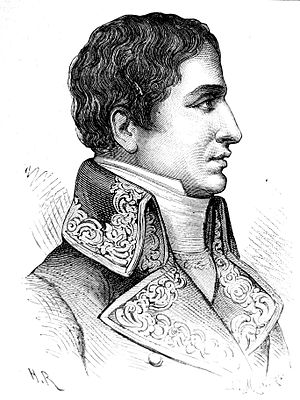 Lucien Bonaparte, President of the Council of 500, who engineered the coup that brought his brother to power.

On the morning of 18 Brumaire, Lucien Bonaparte falsely persuaded the Councils that a Jacobin coup was at hand in Paris, and induced them to depart for the safety of the suburban Château de Saint-Cloud.[2] Napoleon was charged with the safety of the two Councils and given command of all available local troops.[3]

The resignation of three of the five Directors prevented a quorum and thus practically abolished the Directory, but the two Jacobin Directors, Louis Gohier and Jean-François-Auguste Moulin, continued to protest furiously. Both men were arrested by Napoleon's ally, General Jean Victor Marie Moreau, and by the following day they were compelled to give up their resistance.[4]

In contrast to the Directory, the two Councils were not yet intimidated and continued meeting.

By the following day, the deputies had, for the most part, realized that they were facing an attempted coup rather than being protected from a Jacobin rebellion. Faced with their recalcitrance, Napoleon stormed into the chambers, escorted by a small force of grenadiers. While perhaps unplanned, this proved to be the coup within the coup: from this point, this was a military affair.

Napoleon found the Ancients resistant "despite a massive show of military strength."[3] He met with heckling as he addressed them with such "home truths" as, "the Republic has no government" and, most likely, "the Revolution is over." One deputy called out, "And the Constitution?" Napoleon replied, referring to earlier parliamentary coups, "The Constitution! You yourselves have destroyed it. You violated it on 18 Fructidor; you violated it on 22 Floreal; you violated it on 30 Prairial. It no longer has the respect of anyone." In Exit liberté à la François (1799), James Gillray caricatured Napoleon and his grenadiers driving the Council of Five Hundred from the Orangerie.

Napoleon's reception by the Council of Five Hundred was even more hostile.[3] His grenadiers entered just as the legality of Barras' resignation was being challenged by the Jacobins in the chamber. Upon entering, Napoleon was first jostled, then outright assaulted. Depending on whose account is accepted, he may or may not have come close to fainting. It was not Napoleon himself, but his brother Lucien, President of the Council, who called upon the grenadiers to defend their leader. Napoleon escaped, but only through the use of military force.[1]

A motion was raised in the Council of Five Hundred to declare Napoleon an outlaw. At this point, Lucien Bonaparte apparently slipped out of the chamber and told the soldiers guarding the Councils that the majority of the Five Hundred were being terrorized by a group of deputies brandishing daggers. Then, according to Michael Rapport, "He pointed to Napoleon's bloody, pallid face as proof. Then, in a theatrical gesture, he seized a sword and promised to plunge it through his own brother's heart if he were a traitor."[5] Lucien ordered the troops to expel the violent deputies from the chamber.[3] Grenadiers under the command of General Joachim Murat marched into the Orangerie and dispersed the Council. This was effectively the end of the Directory.[3]

The Ancients passed a decree which adjourned the Councils for three months, appointed Napoleon, Sieyès, and Ducos provisional consuls, and named the Legislative Commission. Some tractable members of the Five Hundred, rounded up afterwards, served to give these measures the confirmation of their House. Thus the Directory and the Councils came to an end.[1]

The Directory was crushed, but the coup within the coup was not yet complete. The use of military force had certainly strengthened Napoleon's hand vis à vis Sieyès and the other plotters. With the Council routed, the plotters convened two commissions, each consisting of twenty-five deputies from the two Councils. The plotters essentially intimidated the commissions into declaring a provisional government, the first form of the Consulate with Napoleon, Sieyès, and Ducos as Consuls. The lack of reaction from the streets proved that the revolution was, indeed, over. "A shabby compound of brute force and imposture, the 18th Brumaire was nevertheless condoned, nay applauded, by the French nation. Weary of revolution, men sought no more than to be wisely and firmly governed."[1] Resistance by Jacobin officeholders in the provinces was quickly crushed. Twenty Jacobin deputies were exiled, and others were arrested. The commissions then drew up the "short and obscure Constitution of the Year VIII", the first of the constitutions since the Revolution without a Declaration of Rights.[6]

Bonaparte thus completed his coup within a coup by the adoption of a constitution under which the First Consul, a position he was sure to hold, had greater power than the other two. In particular, he appointed the Senate and the Senate interpreted the constitution. The Senate allowed him to rule by decree, so the more independent State Council and Tribunat were relegated to unimportant roles. It led ultimately to the rise of the First French Empire.

In 1852, Karl Marx wrote The Eighteenth Brumaire of Louis Napoleon about a much later event, the 2 December 1851 coup against the Second Republic by Napoleon III of France, who was Napoleon's nephew. Marx considered Louis Napoleon a trifling politician compared to his world-conquering uncle, as expressed in Marx's oft-quoted opening bon mot:

Hegel remarks somewhere that all great world-historic facts and personages appear, so to speak, twice. He forgot to add: the first time as tragedy, the second time as farce.