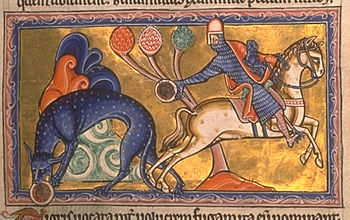 This depiction of a knight on horseback might show a courser.

A courser is a swift and strong horse, frequently used during the Middle Ages as a warhorse. It was ridden by knights and men-at-arms.

Coursers are commonly believed to be named for their running gait,[1] (from Old French cours, 'to run'[2]). However, the word possibly derived from the Italian corsiero, meaning 'battle horse'.[3]

The courser was more common than the destrier,[4] and preferred for hard battle as they were light, fast and strong.[1] They were valuable horses, but less expensive than the highly prized destrier.[5] Another horse commonly ridden during war was the rouncey, which was an all-purpose horse.