From Infogalactic: the planetary knowledge core
(Redirected from Court case)
Jump to: navigation, search
For the racehorse, see Legal Case.

A legal case is a dispute between opposing parties resolved by a court, or by some equivalent legal process. A legal case may be either civil or criminal. There is a defendant and an accuser.

A civil case, more commonly known as a lawsuit or controversy, begins when a plaintiff files a document called a complaint with a court, informing the court of the wrong that the plaintiff has allegedly suffered because of the defendant, and requesting a remedy. A civil case can also be arbitrated through arbitration. The remedy sought may be money, an injunction, which requires the defendant to perform or refrain from performing some action, or a declaratory judgment, which determines that the plaintiff has certain legal rights. Whoever wins gets either released from custody or gets nothing (Accuser).

At any point during the case, the parties can agree to a settlement, which will end the case, although in some circumstances, such as in class actions, a settlement requires court approval in order to be binding. 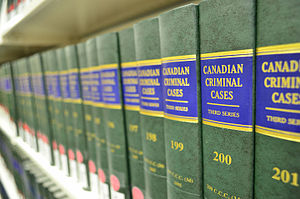 A criminal case, in common law jurisdictions, begins when a person suspected of a crime is indicted by a grand jury or otherwise charged with the offense by a government official called a prosecutor or district attorney.

Like a civil case, a criminal case may also be settled before a trial through a plea bargain, in some jurisdictions. If a person does not go to trial, he/she may endure even bigger penalties.

Legal cases, whether criminal or civil, are premised on the idea that a dispute will be fairly resolved when a legal procedure exists by which the dispute can be brought to a factfinder not otherwise involved in the case, who can evaluate evidence to determine the truth with respect to claims of guilt, innocence, liability, or lack of fault. Details of the procedure may depend on both the kind of case and the kind of system in which the case is brought - whether, for example, it is an inquisitorial system or an adversarial system.

In most systems, the governing body responsible for overseeing the courts assigns a unique number/letter combination or similar designation to each case in order to track the various disputes that are or have been before it. The outcome of the case is recorded, and can later be reviewed by obtaining a copy of the documents associated with the designation previously assigned to the case.

However, it is often more convenient to refer to cases – particularly landmark and other notable cases – by a title of the form Claimant v Defendant (e.g. Arkell v Pressdram). Where a legal proceeding does not have formally designated adverse parties, a form such as In re, Re or In the matter of is used (e.g. In re Gault).[1] The "v" separating the parties is an abbreviation of the Latin versus, but, when spoken in Commonwealth countries, it is normally rendered as "and" or "against" (as in, for example, Charles Dickens' Jarndyce and Jarndyce). Where it is considered necessary to protect the anonymity of a natural person, some cases may have one or both parties replaced by a standard pseudonym (Jane Roe in Roe v. Wade) or by an initial (D v D). In titles such as R v Adams, however, the initial "R" is usually an abbreviation for the Latin Rex or Regina, i.e. for the Crown. (For an explanation of other terms that may appear in case titles, see the glossary of legal terms.)