Court of the Lord Lyon 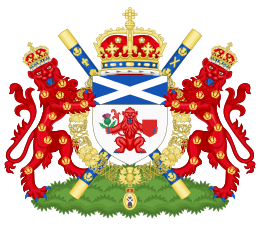 The Court of the Lord Lyon, also known as the Lyon Court or Lyon Office, is a standing court of law which regulates heraldry in Scotland. Like the College of Arms in England it maintains the register of grants of arms, known as the Public Register of All Arms and Bearings in Scotland, as well as records of genealogies.

The Lyon Court is a public body, and the fees for grants of arms are paid to HM Treasury. It is headed by the Lord Lyon King of Arms, who must be legally qualified, as he has criminal jurisdiction in heraldic matters, and the court is fully integrated into the Scottish legal system, including having a dedicated prosecutor, known in Scotland as a Procurator Fiscal.

The Lord Lyon King of Arms, the chief heraldic officer of Scotland is both a Great Officer of State as well as a Judge in the Scottish judiciary.[1] The Lord Lyon's judicial duties concerning Scottish heraldic business and heraldic laws are conducted through the machinery of the Court of the Lord Lyon. The Court exercises both civil and penal jurisdiction under the old Common Law of Scotland and many Acts of Parliament.[1]

Rights to arms and pedigree

The Lord Lyon Court is directly responsible for the establishment of the rights to arms and pedigree. These can include the granting and regranting of armorial bearings by Letters Patent and various Birthbrieves, such as Diplomas of Nobility or of the Chiefship (Diploma Stemmatis). All of these actions must begin with a formal petition to the Court.[2]

When sufficient evidence is attested to these rights, a judicial 'Interlocutor' or warrant will be issued by the Lord Lyon.[2] This power of the Lord Lyon is derived from the monarch's royal prerogatives, which has been delegated to the office by law.[3] The warrant will then authorise the Lyon Clerk and Keeper of the Records to prepare Letters Patent of the particular coat of arms or genealogy to be recorded in the: Public Register of All Arms and Bearings in Scotland or in the Public Register of All Genealogies and Birthbrieves in Scotland.[2] The fees on all of these procedures are payable to the Exchequer.[3] This is in contrast to the College of Arms in London, which is an independent corporate body and not a government department, therefore all fees are reinvested into the corporation.

The penal aspect of the Court is concerned with the protection of the rights of both private individuals and of the Crown (in the form of the Scottish Government) in Scottish armorial bearings.[2] The Lord Lyon also has control over H.M. Messengers-at-arms, judicial officers responsible for serving documents and enforcing legal orders throughout Scotland.[2][4]

The protection of the rights to arms is of signal importance because of the fact that persons and corporation have paid fees to the Crown in return for exclusive rights to use those armorial bearings. A coat of arms can only belong to one particular person at a time. Without such protection, a coat of arms would be useless as a form of identification and worthless as a piece of private property.[2] Furthermore, a misappropriation or unauthorised use (displaying or usurping) of a man's coat of arms is still considered a 'real injury' under Scottish common law.[2]

Accordingly, an owner of a Scottish coat of arms may obtain a judicial order in the Court against anybody using his arms. The Crown and the public have an interest in these cases: the Crown has such an interest because, in Scotland, all fees on the registration of armorial bearings and pedigrees are payable to H.M. Treasury; the public has an interest in terms of the prevention of fraud and of the misappropriation of property. Individual coats of arms are also considered legal evidence, which means that they could be used in legal cases concerning the establishment of succession or identity.[2]

The Lyon Court, like all Scottish courts has a public prosecutor; styled 'Procurator Fiscal to Lyon Court', who is independently appointed by the Scottish Ministers. He raises proceedings, when necessary, against those who improperly usurp armorial bearings. The punishment for this offence is set out in several Scottish statutes acts. The court has the power to fine and to ensure items bearing the offending Arms are removed, destroyed or forfeited. In lieu of the financial interests of the Treasury, the High Court of Justiciary, will therefore sometimes regard cases brought by the Procurator Fiscal similarly to those of the Inland Revenue prosecution. Accordingly, an armorial offender was viewed as sternly as any other evading national taxation.[2] This is in contrast to the Court of Chivalry in England, which has similar powers to the Lord Lyon Court, but is a civil court, and has met only once in the last 230 years, in 1954, and is unlikely to sit again unless for a substantial cause.

Historically the punishment for the usurpation of arms were severe. In Acts dated 1592 and 1672, the Court was given the full power to fine and imprison offenders.[2][5][6] In 1669 the Court was given the power to issue Letters of horning. As well as the full power: to erase unwarranted arms, to 'dash them furth of' stained-glass windows and to break unwarranted seals. Where the cases involve forfeiture, the Court could grant a warrant for the seizure of movable goods and gear where unwarranted arms are found.[2][7]

New Register House in Edinburgh, home of the Lyon Court

HM Officers of Arms; who come under the control of the Lord Lyon and are members of the Royal Household in Scotland but are not officers of the Court of the Lord Lyon, carry out many ceremonial duties in Scotland, on State and Royal occasions and in connection with Scottish public life. They may act as professional consultants in the realms of heraldry and genealogy, like an advocate or a law agent, for members of the public and could appear for their clients before the Lyon Court as well as in the English Court of Chivalry.[8]

Formerly there were: six Heralds of Arms and six Pursuivant of Arms in Ordinary (full-time members) and at various times any number of Extraordinary officers. In 1867 an Act of Parliament reduced the number of Ordinary officers to just three of each rank.[8][9] The Act also set out their salaries and reaffirmed their rights and duties. These officers of arms wears the tabard of the Royal Arms of the United Kingdom, with the Scottish quarter taking precedence, made out of velvet and gold.[1] They frequently appear in this uniform, when accompanying the monarch in royal ceremonies whilst she is in Scotland.

Other ceremonies in which the HM Officers of Arms take part include; the announcement of the dissolution of Parliament from the Mercat Cross on the Royal Mile in Edinburgh, the inauguration of the governors of Edinburgh Castle, and the ceremonial opening of the annual meeting of the General Assembly of the Church of Scotland.

Officers of the Lord Lyon Court

The officers of the Court are the judge of the Lyon Court who is the Lord Lyon King of Arms and the Lyon Clerk and Keeper of the Records whose appointments are made by the Royal sign-manual, and the Procurator Fiscal who is independently appointed by the Scottish Ministers. All registered in the Edinburgh Gazette. There is also a Macer to the Lord Lyon who is a senior Messenger-at-Arms. The Macer appears when the Court is sitting in public and when Proclamations are made by the Lord Lyon. 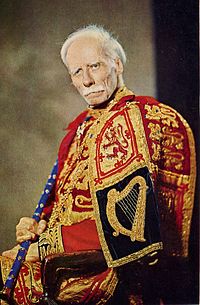 Sir Thomas Innes of Learney in his tabard of the Royal Arms, He held the office of the Lord Lyon from 1945 to 1969.

Her Majesty's Officers of Arms

In Scotland there are also four private pursuivants who are independent of Lyon Court. These officers are employed by Scottish nobles and chiefs and perform duties relating to genealogical, heraldic, and ceremonial matters of clan members. For more information see Private Officer of Arms. 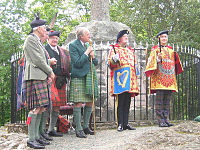 Charles Burnett, Ross Herald at the installation ceremony of the Honorable Adam Bruce as Finlaggan Pursuivant of Arms, a private herald, to Clan MacDonald in 2006.