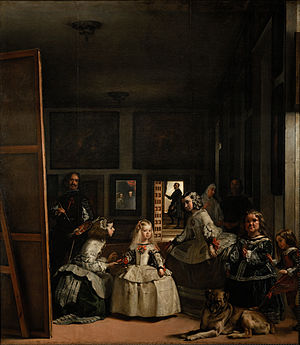 Las Meninas, Diego Velázquez, 1656, shows a princess watching her unseen parents as Velázquez paints them; the cross on his chest was added later, according to legend painted by the king himself, after the artist received the Order of Santiago in 1659 (click on image and run cursor over to identify figures).

A court painter was an artist who painted for the members of a royal or noble family, sometimes on a fixed salary and on an exclusive basis where the artist was not supposed to undertake other work. Especially in the late Middle Ages, they were often given the office of valet de chambre. Usually they were given a salary and formal title, and often a pension for life, though arrangements were very variable. For the artist, a court appointment had the advantage of freeing them from the restriction of local painters' guilds, although in the Middle Ages and Renaissance they also often had to spend large amounts of time doing decorative work about the palace, and creating temporary works for court entertainments and displays. In England the role of Serjeant Painter was set up for this, leaving the "King's painter" (and the queen's) free to paint mostly portraits. See category of Italian art collectors for lists that included non-aristocratic patrons. Some artists, like Jan van Eyck or Diego Velázquez, were used in other capacities at court, as diplomats functionaries, or administrators.

In Islamic cultures, especially between the 14th and 17th centuries, similar arrangements operated for miniaturists and artists in other media. In the Persian miniature, the shah and other rulers typically maintained a "court workshop" or "atelier", of calligraphers, miniaturists, binders and other crafts, usually managed by the royal librarian. More than in the West, the courts were the essential patrons of large-scale commissions, and political changes, or changes in personal tastes, could have a significant effect on the development of a style. The name by which Riza Abbasi is usually known includes the honorific title "Abbasi", which he and others were given by Shah Abbas I of Persia to associate them with their patron. Abd as-Samad, a Persian painter who moved to the Mughal Empire, was given a number of significant administrative jobs, as indeed was his artist son. The court remained the focus of patronage of painting in the "sub-Mughal" princely courts of India, whether Muslim or Hindu.

At many periods rulers owned or controlled royal workshops or factories making high-quality tapestries, porcelain or pottery, silks and other types of object. This was especially the case in China and in the Byzantine Empire. Often court artists worked on the designs for these products; for example the finest carpets of Persia, Ottoman Turkey and Mughal India reflect very closely developments in style found in other media such as Ottoman illumination, and it is usually assumed that designs were sent to the weavers from the court. The same process can be better documented in 17th century France, where the court painter Charles Le Brun was director of the royal Gobelins Manufactory, then producing far more than just tapestries, and also designed the royal commissions from the private Savonnerie manufactory of carpets. Le Brun dominated, and largely created, the style found throughout Louis XIV's palaces, which was then hugely influential in France and throughout Europe.

By the 20th century court painters was an obsolete position. Commonly more artists were granted permission by royalty who would sit for official portraits whether for private of patron purposes.