The United Kingdom does not have a single unified judicial system — England and Wales have one system, Scotland another, and Northern Ireland a third. There are exceptions to this rule, for example in immigration law, the jurisdiction of the First Tier Tribunal (Immigration & Asylum Chamber) and the Upper Tribunal covers the whole of the United Kingdom, while in employment law there is a single system of Employment Tribunals for England and Wales and Scotland (but not Northern Ireland). Additionally, the Military Court Service has jurisdiction over all members of the armed forces of the United Kingdom in relation to offences against military law.

To overcome problems resulting from the intimidation of jurors and witnesses, the right to a jury trial in Northern Ireland was suspended for certain terrorist offences in 1972, and the so-called "Diplock courts" were introduced to try people charged with paramilitary activities. Diplock courts are common in Northern Ireland for crimes connected to terrorism.[1]

Administration of the courts is the responsibility of the Northern Ireland Courts and Tribunals Service.

The Supreme Court of the United Kingdom was created by the Constitutional Reform Act 2005. It took its duties up on 1 October 2009. It is the highest court of appeal in Northern Ireland, hearing ultimate appeals from all the courts of the United Kingdom, other than Scottish criminal cases.

The Supreme Court has taken over the appellate jurisdiction formerly vested in the House of Lords.

The title of the court was changed[5] on 1 October 2009 when the relevant provisions of the Constitutional Reform Act 2005 came into force establishing the Supreme Court of the United Kingdom. 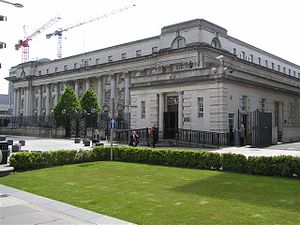 The Royal Courts of Justice, Belfast

The High Court of Justice (High Court) is, like its English equivalent, split into three divisions: Queen's Bench Division, Family Division and Chancery Division. The High Court is located in the Royal Courts of Justice, Belfast.

The Crown Courts hear more serious criminal cases. These are indictable offences and "either way" offences which are committed for trial in the Crown Courts rather than the magistrates' courts. 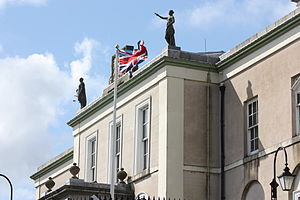 Additionally, there is the Enforcement of Judgments Office, and coroners' courts, which investigate the circumstances of sudden, violent or unnatural deaths.