Covariance and contravariance of vectors

From Infogalactic: the planetary knowledge core
Jump to: navigation, search
For use of "covariance" in the context of special relativity, see Lorentz covariance.
For other uses of "covariant" or "contravariant", see covariance and contravariance (disambiguation). 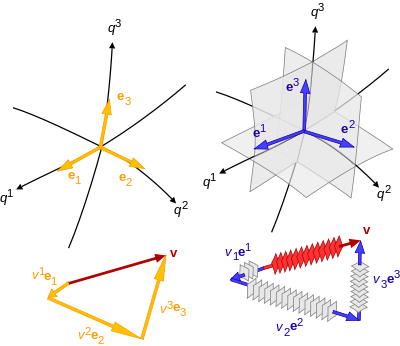 A vector v (red) represented by in 3d general curvilinear coordinates (q1, q2, q3), a tuple of numbers to define point in a position space. Note the basis and cobasis do not coincide unless the basis is orthogonal.[1]

In multilinear algebra and tensor analysis, covariance and contravariance describe how the quantitative description of certain geometric or physical entities changes with a change of basis. In physics, a basis is sometimes thought of as a set of reference axes. A change of scale on the reference axes corresponds to a change of units in the problem. For instance, in changing scale from meters to centimeters (that is, dividing the scale of the reference axes by 100), the components of a measured velocity vector will multiply by 100. Vectors exhibit this behavior of changing scale inversely to changes in scale to the reference axes: they are contravariant. As a result, vectors often have units of distance or distance times some other unit (like the velocity).

In contrast, dual vectors (also called covectors) typically have units the inverse of distance or the inverse of distance times some other unit. An example of a dual vector is the gradient, which has units of a spatial derivative, or distance−1. The components of dual vectors change in the same way as changes to scale of the reference axes: they are covariant. The components of vectors and covectors also transform in the same manner under more general changes in basis:

Curvilinear coordinate systems, such as cylindrical or spherical coordinates, are often used in physical and geometric problems. Associated to any coordinate system is a natural choice of coordinate basis for vectors based at each point of the space, and covariance and contravariance are particularly important for understanding how the coordinate description of a vector changes in passing from one coordinate system to another.

The terms covariant and contravariant were introduced by James Joseph Sylvester in 1853 in order to study algebraic invariant theory. In this context, for instance, a system of simultaneous equations is contravariant in the variables. Tensors are objects in multilinear algebra that can have aspects of both covariance and contravariance. The use of both terms in the modern context of multilinear algebra is a specific example of corresponding notions in category theory.

In physics, a vector typically arises as the outcome of a measurement or series of measurements, and is represented as a list (or tuple) of numbers such as

By contrast, a covariant vector has components that change oppositely to the coordinates or, equivalently, transform like the reference axes. For instance, the components of the gradient vector of a function

transform like the reference axes themselves. When only rotations of the axes are considered, the components of contravariant and covariant vectors behave in the same way. It is only when other transformations are allowed that the difference becomes apparent.

The general formulation of covariance and contravariance refers to how the components of a coordinate vector transform under a change of basis (passive transformation). Thus let V be a vector space of dimension n over the field of scalars S, and let each of f = (X1,...,Xn) and f' = (Y1,...,Yn) be a basis of V.[note 1] Also, let the change of basis from f to f′ be given by

for some invertible n×n matrix A with entries

. Here, each vector Yj of the f' basis is a linear combination of the vectors Xi of the f basis, so that

so that (2) can be rewritten as a matrix product

The vector v may also be expressed in terms of the f' basis, so that

However, since the vector v itself is invariant under the choice of basis,

are the entries of the inverse matrix of A.

Because the components of the vector v transform with the inverse of the matrix A, these components are said to transform contravariantly under a change of basis.

The way A relates the two pairs is depicted in the following informal diagram using an arrow. The reversal of the arrow indicates a contravariant change:

These components are the action of α on the basis vectors Xi of the f basis.

Under the change of basis from f to f' (1), the components transform so that

Denote the row vector of components of α by α[f]:

so that (3) can be rewritten as the matrix product

Because the components of the linear functional α transform with the matrix A, these components are said to transform covariantly under a change of basis.

The way A relates the two pairs is depicted in the following informal diagram using an arrow. A covariant relationship is indicated since the arrows travel in the same direction:

Had a column vector representation been used instead, the transformation law would be the transpose

The choice of basis f on the vector space V defines uniquely a set of coordinate functions on V, by means of

The coordinates on V are therefore contravariant in the sense that

This gives rise to the frame f = (X1,...,Xn) at every point of the coordinate patch.

If yi is a different coordinate system and

then the frame f' is related to the frame f by the inverse of the Jacobian matrix of the coordinate transition:

. Thus a tangent vector is defined by

Such a vector is contravariant with respect to change of frame. Under changes in the coordinate system, one has

Therefore, the components of a tangent vector transform via

Accordingly, a system of n quantities vi depending on the coordinates that transform in this way on passing from one coordinate system to another is called a contravariant vector.

Covariant and contravariant components of a vector with a metric

In a vector space V over a field K with a bilinear form g : V × V → K (which may be referred to as the metric tensor), there is little distinction between covariant and contravariant vectors, because the bilinear form allows covectors to be identified with vectors. That is, a vector v uniquely determines a covector α via

for all vectors w. Conversely, each covector α determines a unique vector v by this equation. Because of this identification of vectors with covectors, one may speak of the covariant components or contravariant components of a vector, that is, they are just representations of the same vector using reciprocal bases.

the Kronecker delta. In terms of these bases, any vector v can be written in two ways: 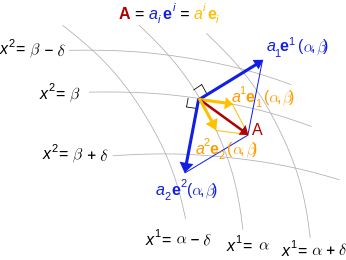 In the Euclidean plane, the dot product allows for vectors to be identified with covectors. If

is a basis, then the dual basis

Thus, e1 and e2 are perpendicular to each other, as are e2 and e1, and the lengths of e1 and e2 normalized against e1 and e2, respectively.

For example,[2] suppose that we are given a basis e1, e2 consisting of a pair of vectors making a 45° angle with one another, such that e1 has length 2 and e2 has length 1. Then the dual basis vectors are given as follows:

Applying these rules, we find

For instance, the vector

is a vector with contravariant components

The covariant components are obtained by equating the two expressions for the vector v:

In the three-dimensional Euclidean space, one can also determine explicitly the dual basis to a given set of basis vectors e1, e2, e3 of E3 that are not necessarily assumed to be orthogonal nor of unit norm. The contravariant (dual) basis vectors are:

Even when the ei and ei are not orthonormal, they are still mutually dual:

Likewise, the covariant components of v can be obtained from the dot product of v with covariant basis vectors, viz.

Then v can be expressed in two (reciprocal) ways, viz.

Combining the above relations, we have

and we can convert from covariant to contravariant basis with

More generally, in an n-dimensional Euclidean space V, if a basis is

the reciprocal basis is given by

Indeed, we then have

The covariant and contravariant components of any vector

are related as above by

In the field of physics, the adjective covariant is often used informally as a synonym for invariant. For example, the Schrödinger equation does not keep its written form under the coordinate transformations of special relativity. Thus, a physicist might say that the Schrödinger equation is not covariant. In contrast, the Klein–Gordon equation and the Dirac equation do keep their written form under these coordinate transformations. Thus, a physicist might say that these equations are covariant.

Despite this usage of "covariant", it is more accurate to say that the Klein–Gordon and Dirac equations are invariant, and that the Schrödinger equation is not invariant. Additionally, to remove ambiguity, the transformation by which the invariance is evaluated should be indicated.

Use in tensor analysis

are the coordinates of a particle at its proper time

is a scalar field.

In differential geometry, the components of a vector relative to a basis of the tangent bundle are covariant if they change with the same linear transformation as a change of basis. They are contravariant if they change by the inverse transformation. This is sometimes a source of confusion for two distinct but related reasons. The first is that vectors whose components are covariant (called covectors or 1-forms) actually pull back under smooth functions, meaning that the operation assigning the space of covectors to a smooth manifold is actually a contravariant functor. Likewise, vectors whose components are contravariant push forward under smooth mappings, so the operation assigning the space of (contravariant) vectors to a smooth manifold is a covariant functor. Secondly, in the classical approach to differential geometry, it is not bases of the tangent bundle that are the most primitive object, but rather changes in the coordinate system. Vectors with contravariant components transform in the same way as changes in the coordinates (because these actually change oppositely to the induced change of basis). Likewise, vectors with covariant components transform in the opposite way as changes in the coordinates.