Coventry Kersey Dighton Patmore (23 July 1823 – 26 November 1896) was an English poet[1] and critic best known for The Angel in the House, his narrative poem about an ideal happy marriage.

The eldest son of author Peter George Patmore, Coventry Patmore was born at Woodford in Essex and was privately educated. He was his father's intimate and constant companion and inherited from him his early literary enthusiasm. It was Coventry's ambition to become an artist. He showed much promise, earning the silver palette of the Society of Arts in 1838. In 1839 he was sent to school in France for six months, where he began to write poetry. On his return, his father planned to publish some of these youthful poems; Coventry, however, had become interested in science and poetry was set aside. 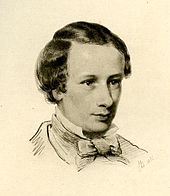 At this time Patmore's father was financially embarrassed; and in 1846 Richard Monckton Milnes, 1st Baron Houghton obtained for Coventry the post of printed book supernumary assistant at the British Museum, a post he occupied for nineteen years, devoting his spare time to poetry. In 1847 he married Emily Augusta Andrews, daughter of Dr. Andrews of Camberwell, and by 1851 they had had two sons, Coventry (born 1848) and Tennyson (born 1850). Three daughters followed – Emily (born 1853), Bertha (born 1855) and Gertrude (born 1857), before their last child, a son (Henry John), was born in 1860.

He later returned to writing however, enthused by the success of Alfred Lord Tennyson; and in 1844 he published a small volume of Poems, which was original but uneven. Patmore, distressed at its reception, bought up the remainder of the edition and destroyed it. What upset him most was a cruel review in Blackwood's Magazine; but the enthusiasm of his friends, together with their more constructive criticism, helped foster his talent. The publication of this volume bore immediate fruit by causing its author to be introduced to various men of letters, including Dante Gabriel Rossetti, through whom Patmore became known to William Holman Hunt, and was thus drawn into the Pre-Raphaelite Brotherhood, contributing his poem "The Seasons" to The Germ.

In his time at the British Museum Patmore was instrumental in starting the Volunteer Movement in 1852. He wrote an important letter to The Times on the subject, and stirred up much martial enthusiasm among his colleagues. 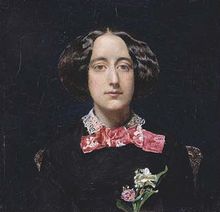 Patmore's wife Emily, the model for the Angel in the House, portrait by John Everett Millais.

In 1853 he republished Tamerton Church Tower, the more successful of his pieces from Poems of 1844, adding several new poems which showed distinct advance, both in conception and treatment; and in the following year (1854) the first part of his best-known poem, The Angel in the House appeared.[2][3][4] The Angel in the House is a long narrative and lyric poem, with four sections composed over a period of years: The Betrothed and The Espousals (1856) which eulogize his first wife; followed by Faithful For Ever (1860); and The Victories of Love (1862). The four works were published together in 1863 and have come to symbolise the Victorian feminine ideal[5] – which was not necessarily the ideal amongst feminists of the period.[6]

By 1861 the family was living in Elm Cottage, North End, Hampstead. On 5 July 1862[7] Emily died after a lengthy and lingering illness, and shortly afterwards Coventry joined the Roman Catholic church.

In 1865 he remarried, his second wife being Marianne Byles, daughter of James Byles of Bowden Hall, Gloucester; a year later he purchased Buxted Hall in Surrey, the history of which he wrote in How I managed my Estate (1886). In 1877 he published The Unknown Eros,[8] which contains his finest poetic work,[9] and in the following year Amelia, his own favourite among his poems, together with an interesting essay on English Metrical Law, appeared. This departure into criticism continued in 1879 with a volume of papers entitled Principle in Art, and again in 1893 with Religio Poetae.

A collected edition of Patmore's poems appeared in two volumes in 1886, with a characteristic preface which might serve as the author's epitaph. "I have written little," it runs; "but it is all my best; I have never spoken when I had nothing to say, nor spared time or labour to make my words true. I have respected posterity; and should there be a posterity which cares for letters, I dare to hope that it will respect me." The sincerity which underlies this statement, combined with a certain lack of humour which peers through its naïveté, points to two of the principal characteristics of Patmore's earlier poetry; characteristics which came to be almost unconsciously merged and harmonized as his style and his intention drew together into unity.

His best work is found in the volume of odes called The Unknown Eros, which is full not only of passages but entire poems in which exalted thought is expressed in poetry of the richest and most dignified melody. Spirituality informs his inspiration; the poetry is glowing and alive. The magnificent piece in praise of winter, the solemn and beautiful cadences of "Departure," and the homely but elevated pathos of "The Toys," are in their manner unsurpassed in English poetry. His somewhat reactionary political opinions, which also find expression in his odes, find less praise today although they can certainly be said to reflect, as do his essays, a serious and very active mind. Patmore is today one of the least-known but best-regarded Victorian poets.