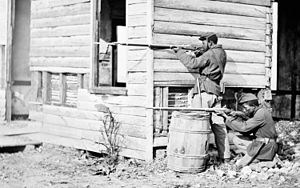 Two American soldiers in 1864 take cover. One flattens himself against the wall while the other crouches behind a barrel

In military combat, the concept of cover refers to anything which is capable of physically protecting an individual from enemy fire. This differentiates it from the similar concept of concealment, in that an object or area of concealment only affords the benefit of stealth, not actual protection from small arms fire or artillery fragments. An example of "cover vs. concealment" would be sandbags vs. tall grass. Cover may be a naturally-occurring feature, such as a rock or a tree stump, or it may be a constructed feature, such as a foxhole or a trench.

In some military services (especially in the United States), a uniform's hat is sometimes referred to officially as a cover, as in "Hey soldier, remove your cover!" or "You're not in uniform without your cover." It is a convention in the U.S. Army that an armed soldier must wear cover while indoors to indicate that they are under arms.

Many first and third-person shooter video games encourage the player to utilize cover. This gameplay mechanic is often referred to as a "cover system".