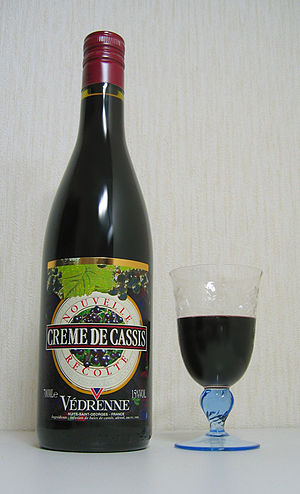 Several cocktails are made with crème de cassis, including the very popular wine cocktail, kir.

It may also be served as an after-dinner liqueur or as a frappé.

It is made from blackcurrants that are crushed and soaked in alcohol, with sugar subsequently added.

The modern version of the beverage first appeared in 1841, when it displaced "ratafia de cassis," which had been produced in prior centuries.

While crème de cassis is a specialty of Burgundy, it is also made in Anjou,[1] England,[2] Luxembourg, Quebec and Tasmania.[3]

The quality of crème de cassis depends upon the variety of fruit used, the content of the berries, and the production process. If it is labelled "Crème de Cassis de Dijon," one is guaranteed berries from the commune of Dijon.

Nearly 16 million litres of crème de cassis are produced annually. It is consumed mostly in France but is also exported.

It is a favourite drink of the fictional detective Hercule Poirot.[4][5][6]