Crécy-en-Ponthieu is a commune in the Somme department in Picardie in northern France, located south of Calais. It gives its name to Crécy Forest, which starts about two kilometres to the south-west of the town and which is one of the largest forests in the north of France. A very small river, the Maye, runs through the town. It was the site of the Battle of Crécy in 1346.

Crécy-en-Ponthieu is best known as the site of the Battle of Crécy in 1346, one of the earliest and most important battles of the Hundred Years' War. Yet there are other significant historical links. One is the Chausee Brunehaut which passed within two miles of the town and is the Roman road from Paris and Amiens to Boulogne, and is still visible and walkable today. And just to the north of the town, slightly to the west of where the Battle was fought, there was an airfield used in the Second World War.

The airfield was built by the British to provide air support before the fall of France in 1940. During the Battle of France, the plan seems to have been to deploy RAF squadrons of Bristol Blenheim light bombers there, but it is not clear how intensively the airfield was used. In the confused days of mid-May 1940 one squadron that was ordered to deploy there did not, due to the absence of any military protection. It is most notable by its occupation by the German Luftwaffe whose wing (in RAF terms, a group of 3 squadrons) II. Gruppe of Zerstörergeschwader 26 of Messerschmitt Bf 110s was stationed there from May 1940 until November 1940 when, after the end of the Battle of Britain, the Gruppe was withdrawn to Germany to rest and re-equip. Several other squadrons came and went, including some Messerschmitt Bf 109s. The entrance to the airfield is still visible (in 2009) on the left of the D12 road from Crécy to Ligescourt, halfway between the two places. Some fortified installations are also visible, hidden beneath trees on various sides of the airfield.

The Crécy museum holds a collection of items, crammed into two rooms and a passageway. A range of material can be found, ranging from things about the battle of Crecy to various items from World War Two, pre-historic material, and geological specimens. 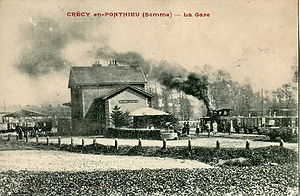 The station shown on an old postcard

There was a station (Crécy-Estrées) on a branch of the Réseau des Bains de Mer which ran between Abbeville and Dompierre-sur-Authie. It opened on 19 June 1892 and closed to passengers on 10 March 1947 and freight on 1 February 1951.