From Infogalactic: the planetary knowledge core
Jump to: navigation, search
This article is about the American railroad scandal. For the unrelated French bank, see Crédit Mobilier.

Thomas Durant, one of the founders of the Credit Mobilier company

The Crédit Mobilier scandal of 1867, which came to public attention in 1872, involved the Union Pacific Railroad and the Crédit Mobilier of America construction company in the building of the eastern portion of the First Transcontinental Railroad. The scandal was in two parts. The construction company charged the railroad far higher rates than usual, and cash and $9 million in discounted stock were given as bribes to 15 powerful Washington politicians, including the Vice-President, the Secretary of the Treasury, four senators, and the Speaker and other members of the House.[1]

The scandal's origins dated back to 1864 when the Union Pacific Railroad was chartered by Congress and the associated Crédit Mobilier was established. (This company had no relation to the French bank of the same name, which at the time was one of the major financial institutions in the world.) In 1867, Congressman Oakes Ames distributed cash bribes and discounted shares of Crédit Mobilier stock to other congressmen in exchange for votes and actions favorable to the Union Pacific.[2] The story was broken by the New York newspaper, The Sun, during the 1872 presidential campaign, when Ulysses S. Grant was running for re-election.[3] Included in the group of legislators named as having received cash or discounted shares of stock were: former Representative Schuyler Colfax, then serving as Grant's Vice President; Henry Wilson, the senator selected to replace Colfax as the Republican vice presidential nominee during the 1872 Presidential election; James G. Blaine, then-Speaker of the House; and Representative James Garfield, the future President of the United States. The scandal caused widespread public distrust of Congress and the federal government during the Gilded Age.

The federal government in 1864–1868 had authorized and chartered the Union Pacific Railroad with $100 million capital, to complete a transcontinental line west from the Missouri River to the Pacific coast. The federal government offered to assist the railroad with a loan of $16,000 to $48,000 per mile, according to location, for a total of more than $60,000,000 in all, and a land grant of 20,000,000 acres, worth $50,000,000 to $100,000,000. The offer initially attracted no subscribers for financing, as the conditions were financially daunting.

Virtually the entire right-of-way (ROW) from the Missouri river to the California coast was without any freight or passenger traffic demand; as there were neither commercial activities of any kind nor any commerce between the then non-existent cities or towns from Nebraska to the California border. Nor were there any branch lines running either to the north or south of the proposed ROW that would have been able to expand their branch traffic by connection with the future transcontinental railway. And finally, contrary to fiscal reality, the entire railroad scheme was being proposed as a "going concern;" that was, as a financially viable idea which, with only "below-market" financing, could both be successfully built and, thereafter, as a going business and functioning business enterprise, earn its operating expenses through freight and passenger rail revenues; profits for investors; interest payments (to the US) on the borrowed U.S, government capital (at the Federal funds rate, based upon the US government bond rates); and, ultimately, the retirement of the debt to the U.S. government. Private capital recognized that this proposed model, its objectives and economic projections, were an impossibility: the traffic demand could never have generated freight or passenger revenues sufficient either to maintain the ROW, motive power (locomotives), freight rolling stock, and passenger rolling stock or to retire the debt due to construction and operations. As a result, on that basis, private investors refused to invest.

The railroad would have to be built for 1,750 miles through desert and mountain, which would mean extremely high freight costs for supplies. In addition, there was the likely risk of armed conflict with hostile tribes of Indians, who occupied many territories in the interior, and no probable early business to pay dividends.[4]

If the Union Pacific's corporate officers had openly undertaken the management and construction of the railroad, then this scheme (to make windfall profits immediately from charges made during construction) would have been exposed to public scrutiny from the start. It would have proved that the opponents of the Pacific Railroad Act had from the beginning been right: the western transcontinental railroad scheme was an unprofitable venture. The opponents had from the start believed the whole project was a bare-faced fraud by some capitalists to build a "railroad to nowhere" and to make tremendous profits doing so, all the while getting the United States government to pay for it. The opponents also thought the construction and its routing were being developed without regard for trying to create a viable and profitable transportation enterprise when the railroad line was completed.

The principal means of the fraud was the method of indirect billing. The Union Pacific presented genuine and accurate invoices to the U.S. government, as evidence of actual construction costs incurred and billed to them by Crédit Mobilier of America for payment. The railroad then prepared and presented meticulously detailed invoices to the U.S. government, requesting payment for these bills, accrued by the Union Pacific from Crédit Mobilier, for the construction of the line. The bills reflected only a small additional fee over the cost stated on the Crédit Mobilier invoices for the Union Pacific's operating and overhead expenses, incurred during the line's construction at a time when no traffic (freight or passenger) was being carried.

Any audit of the Union Pacific and its invoices to the U.S. government would have revealed no evidence of fraud or profiteering. Union Pacific was accepting for payment genuine Crédit Mobilier invoices and was applying an auditable overhead expense for management and administration (of the Union Pacific) during construction of the railroad.

The underlying fraud of a common and unified ownership of the two companies, as regards their principal officers and directors, was not revealed for years. Nor was it revealed that in every major construction contract drawn up between the Union Pacific and Crédit Mobilier, the contract's terms, conditions, and price had been offered (by Crédit Mobilier) and accepted (by the Union Pacific) through the actions of corporate officers and directors who were one and the same persons. The company sought, and was largely successful, in maintaining this fraud and its secrecy by giving discounted (well below the market value, of this highly profitable company) shares of stock (in Crédit) to those members of Congress who also agreed to support additional funding for the railroad. Because of its excessive charges for building the line, the company fully expected that the Union Pacific would have to return to Congress to gain appropriation of additional construction funds. For its time, it was a very sophisticated corporate scam, and it was, at the time, mostly legal. 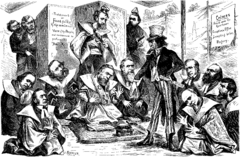 In 1867, Crédit Mobilier replaced Thomas Durant as its head with the Congressman Oakes Ames.[7] In that year Ames offered to members of Congress shares of stock in Crédit Mobilier at its discounted par value rather than the market value, which was much higher. The high market value of the stock resulted from the superb performance of Crédit Mobilier of America as a corporation, which in turn succeeded due to its major contract with the Union Pacific. Crédit Mobilier was the exclusive construction and management agent for the building of the Pacific Railroad. The Union Pacific "suspected" no wrongdoing, and they "paid" Crédit Mobilier (actually themselves) whatever "they" were asked to pay. Crédit Mobilier's corporate income statement regularly showed high revenues in excess of its expenses, and very high net profits in every quarter that it was engaged in the construction of the railroad. It also declared substantial quarterly dividends on its stock.

The congressmen and others allowed to purchase shares at a discount could reap enormous capital gains simply by offering their shares on the market, knowing that they would be purchased at a higher price by investors desiring to own stock in such a "profitable" company. These same members of Congress made the company appear to be profitable by voting to appropriate government funds to cover Crédit Mobilier's inflated charges. Ames's actions became one of the best-known examples of graft in American history.[citation needed]

During the 1872 presidential campaign, the New York City newspaper, The Sun, broke the story.[8] The paper opposed the re-election of Ulysses S. Grant and was regularly publishing articles critical of his administration. Following a disagreement with Ames, Henry Simpson McComb, an associate of Ames and a later executive of the Illinois Central Railroad, leaked compromising letters to the newspaper. The Sun reported that Crédit Mobilier had received $72 million in contracts for building a railroad worth only $53 million. After the revelations, the Union Pacific and other investors were left nearly bankrupt.[7]

In 1872, the House of Representatives submitted the names of nine politicians to the Senate for investigation: Senators William B. Allison (R-IA), James A. Bayard, Jr. (D-DE), George S. Boutwell (R-MA), Roscoe Conkling (R-NY), James Harlan (R-IA), John Logan (R-IL), James W. Patterson (R-NH), and Henry Wilson (R-MA), and Vice President Schuyler Colfax (R-IN). Bayard appeared to have been included as a way to make it appear that the scandal did not involve only Republicans; he wrote a letter disavowing any knowledge of the affair, and his name was generally dropped from the investigation.[9] In addition, other members of Congress including Senator Henry L. Dawes of Massachusetts were implicated.[10] Dawes had purchased $1,000 in stock from Ames, and had received a dividend.[11] Dawes later had doubts about the propriety of the stock purchase, and asked Ames to cancel the purchase; Ames did so, and returned the purchase price to Dawes, while Dawes returned the dividend to Ames.[12] Dawes received 10 percent interest on his $1,000 purchase price, but he otherwise had no interest in the Crédit Mobilier and was not further implicated.[13]

Ultimately, Congress investigated 13 of its members in a probe that led to the censure of Ames and James Brooks, a Democrat from New York. A Department of Justice investigation was also made, with Aaron F. Perry serving as chief counsel. During the investigation, the government found that the company had given shares to more than 30 representatives of both parties, including James A. Garfield, Colfax, Patterson, and Wilson.

Garfield denied the charges and succeeded in gaining election as President in 1880, so the scandal did not have much effect on him. The Republicans replaced Colfax on the ticket, ending his bid to be renominated for Vice President. The new candidate, Henry Wilson, had also been implicated. However, Wilson was able to show that he had paid for stock in his wife's name, and with her money. When the Wilsons later had concerns about the transaction, Ames returned the purchase price, and Wilson returned the dividends he had been paid, while also paying his wife the amount she would have received as dividends if she had kept the stock.[14]

This scheme was dramatized in the AMC television series Hell on Wheels, beginning with the November 6, 2011 pilot episode.