From Infogalactic: the planetary knowledge core
Jump to: navigation, search
File:Creteil Eglise Saint-Christophe.jpg
Church of Saint-Christophe, in the commune of Créteil.

Créteil (French pronunciation: ​[kʁe.tɛj]) is a commune in the southeastern suburbs of Paris, France. It is located 11.5 km (7.1 mi) from the center of Paris. Créteil is the préfecture (capital) of the Val-de-Marne department as well as the seat of the Arrondissement of Créteil. The city is, moreover, the seat of a Roman Catholic diocese and of one of France's 30 nationwide académies (districts) of the Ministry of National Education.

The name Créteil was recorded for the first time as Cristoïlum in the martyrology written by a monk named Usuard in 865. The name Cristoïlum is made of the Celtic word ialo (meaning "clearing, glade", "place of") suffixed to a pre-Latin radical crist- whose meaning is still unclear. Some believe crist is a Celtic word meaning "ridge", a cognate of Latin crista and modern French crête, in which case the meaning of Cristoïlum would be "clearing on the ridge" or "place on the ridge." A more traditional etymology was that crist referred to Jesus Christ, due to the very ancient presence of Christianity in Créteil and the veneration of Saint Agoard and Saint Aglibert, martyred in Créteil around AD 400.

Créteil is a city in the south-eastern suburbs of Paris. It is watered by the Marne river which carries out its last loop before the junction with the Seine at the Charenton-le-Pont. The area is an alluvial plain eroded by the action of the Marne and the Seine. Bordering communes include Maisons-Alfort, Saint-Maur-des-Fossés, Bonneuil-sur-Marne, Limeil-Brévannes, Valenton, Choisy-le-Roi and Alfortville.

The climate in this area has mild differences between highs and lows, and there is adequate rainfall year round. According to the Köppen Climate Classification system, Créteil has a marine west coast climate, abbreviated "Cfb" on climate maps.[1]

Some rare flints from the Palaeolithic age are still being found in modern times in the area. It is, however, a two-ton, Neolithic-era polishing machine that is the prehistoric pride of Créteil. The first documents referring to Créteil are from the Merovingian era, when it was known as Vicus Cristolium' The name comes from the prefix crist and olium. These two terms are thought to be Gallic: "clearing" for olium and "ridge" for crist. The "clearing" of the "ridge" of the Mont-Mesly is on the road connecting Paris and Sens (Trunk Road 19 today). In 1406, the place name "Créteil" makes its appearance after successive deformations from Cristoill (1278), Cristeuil, Cresteul then Creteuil.

During the French Wars of Religion (1567), the Huguenots plundered the church and burned the local charters. New disorders in 1648 forced the evacuation of the inhabitants of Créteil. The end of Louis XIV's reign was marked by a great food shortage throughout the whole of France after a terrible winter in 1709 that resulted in 69 recorded deaths in Créteil. Registers of grievances from the French Revolution in 1789 mention Créteil 15 times.

At the beginning of the 18th century, construction of the first middle-class "Parisian" houses began. In 1814, the east of Créteil was taken by Russian troops. The bridge which spans the Marne between Creteil and Saint-Maur-des-Fossés was inaugurated on 9 April 1841, replacing an ancient ferry.

The Franco-Prussian War of 1870 was particularly cruel for Créteil. The borough was plundered and left in ruins by the Prussians, while the nearby battle of Mont-Mesly on 30 November 1870, left 179 dead. Créteil gave up its pastoral character after World War II. The population subsequently rose from 13,800 in 1954 to 30,654 in 1962.

In 1965, the city became a Préfecture of the new department of the Val-de-Marne.

Créteil Lake began as a gypsum and gravel quarry. Once the groundwater was reached, forming deep ponds, the quarry was abandoned and allowed to fill with water. The lake area is now a popular recreational site attracting fishermen, boaters, wind surfers, etc...

As of 1 January 2006, 27 pharmacies, about 60 dentists, about 60 general practitioners, 10 pediatricians, and a half-dozen ophthalmologists and dermatologists constitute the general medical staff of the city.

US Créteil-Lusitanos, founded in 1936, is the city's football club. They currently play in Ligue 2 and their home stadium is Stade Dominique Duvauchelle. 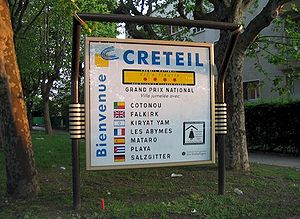 Créteil is twinned with: