Malus (/ˈmeɪləs/[3] or /ˈmæləs/) is a genus of about 30–55 species[4] of small deciduous apple trees or shrubs in the family Rosaceae, including the domesticated orchard apple (M. domestica). The other species are generally known as crabapples, crab apples, crabs, or wild apples.

The genus is native to the temperate zone of the Northern Hemisphere. 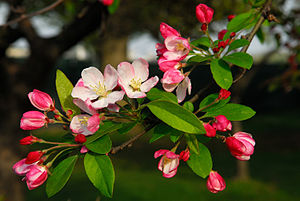 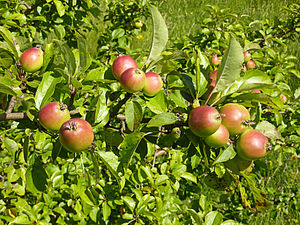 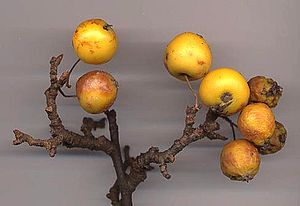 Crabapple fruit are mostly red,[5] but some, such as this cultivar 'Golden Hornet', are yellow 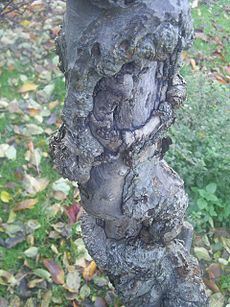 Apple trees are typically 4–12 m (13–39 ft) tall at maturity, with a dense, twiggy crown. The leaves are 3–10 cm (1.2–3.9 in) long, alternate, simple, with a serrated margin. The flowers are borne in corymbs, and have five petals, which may be white, pink or red, and are perfect, with usually red stamens that produce copious pollen, and a half-inferior ovary; flowering occurs in the spring after 50–80 growing degree days (varying greatly according to subspecies and cultivar).

Apples require cross-pollination between individuals by insects (typically bees, which freely visit the flowers for both nectar and pollen); all are self-sterile, and (with the exception of a few specially developed cultivars) self-pollination is impossible, making pollinating insects essential. Several Malus species, including domestic apples, hybridize freely.[6] They are used as food plants by the larvae of a large number of Lepidoptera species; see list of Lepidoptera that feed on Malus.

The fruit is a globose pome, varying in size from 1–4 cm (0.39–1.57 in) diameter in most of the wild species, to 6 cm (2.4 in) in M. sylvestris sieversii, 8 cm (3.1 in) in M. domestica, and even larger in certain cultivated orchard apples. The centre of the fruit contains five carpels arranged star-like, each containing one or two seeds.

For the Malus domestica cultivars, the cultivated apples, see Apple.

Crabapples are popular as compact ornamental trees, providing blossom in Spring and colourful fruit in Autumn. The fruits often persist throughout Winter. Numerous hybrid cultivars have been selected, of which 'Evereste'[7] and 'Red Sentinel'[8] have gained The Royal Horticultural Society's Award of Garden Merit.

Other varieties are dealt with under their species names.

Some crabapples are used as rootstocks for domestic apples to add beneficial characteristics.[9] For example, varieties of Baccata, also called Siberian crab, rootstock is used to give additional cold hardiness to the combined plant for orchards in cold northern areas.[10]

They are also used as pollinizers in apple orchards. Varieties of crabapple are selected to bloom contemporaneously with the apple variety in an orchard planting, and the crabs are planted every sixth or seventh tree, or limbs of a crab tree are grafted onto some of the apple trees. In emergencies, a bucket or drum bouquet of crabapple flowering branches are placed near the beehives as orchard pollenizers. See also Fruit tree pollination.

Crabapples are small and sour tasting, and visually resemble a small apple, particularly some apples known as the "Lady Apple" AKA Pomme d'Api, Lady's Finger, Wax Apple and Christmas Apple.

Crabapple fruit is not an important crop in most areas, being extremely sour and (in some species) woody, and is rarely eaten raw for this reason. In some southeast Asian cultures they are valued as a sour condiment, sometimes eaten with salt and chilli pepper, or shrimp paste.

Some crabapples varieties are an exception to the reputation of being sour, and can be very sweet, such as the 'Chestnut' cultivar.[11]

Crabapples are an excellent source of pectin, and their juice can be made into a ruby-coloured preserve with a full, spicy flavour.[12] A small percentage of crabapples in cider makes a more interesting flavour.[13] As Old English Wergulu, the crab apple is one of the nine plants invoked in the pagan Anglo-Saxon Nine Herbs Charm, recorded in the 10th century.

Apple wood gives off a pleasant scent when burned, and smoke from an apple wood fire gives an excellent flavour to smoked foods.[14] It is easier to cut when green; dry apple wood is exceedingly difficult to carve by hand.[14] It is a good wood for cooking fires because it burns hot and slow, without producing much flame.[14]

Because of the plentiful blossoms and small fruit, crabapples are popular for use in bonsai culture. 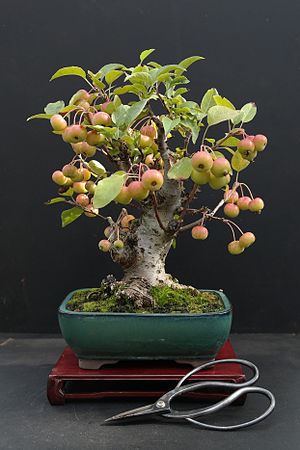