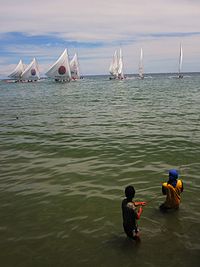 The crab claw sail consists of a sail, approximately an isosceles triangle in shape. The equal length sides are longer than the third side, with spars along the long sides. The forward intersection of the spars is placed towards the bow. The sail is supported by a short mast attached near the middle of the upper spar, and the forward corner is attached to the hull. The lower spar, or boom, is attached at the forward intersection, but is not attached to the mast. The crab claw is a shunting sail. It is used on a boat which has a permanent windward and leeward side, and exchanges one end for the other when coming about, such as a proa.

The crab claw is often compared with the tacking lateen sail. While it is possible for the sails to be identical, the two rigs are not identical. The crab claw pivots around the leading edge spar, while a lateen sail on a tacking boat such as a Sunfish pivots around a mast. Many lateen sails have an arrangement to move the gooseneck on the boom; as the gooseneck moves forward, the axis of rotation moves forward as well, and the sail looks and acts more and more like a crab claw while under way.

The crab claw is also traditionally constructed with curved spars, giving the edges of the sail along the spars a convex shape, while the leech of the sail is often quite concave to keep it stiff on the trailing edge. These features give it its distinct, claw-like shape. Modern crab claws generally have straighter spars and a less convex leech, which gives more sail area for a given length of spar.

The crab-claw sail is something of an enigma. It has been demonstrated to produce very large amounts of lift when reaching, and overall seems superior to any other simple sail plan (this discounts the use of specialised sails such as spinnakers). C. A. Marchaj, a researcher who has experimented extensively with both modern rigs for racing sailboats and traditional sailing rigs from around the world, has done wind tunnel testing of scale models of crab-claw rigs. One popular but disputed theory is that the crab-claw wing works like a delta wing, generating vortex lift. Since the crab claw does not lie symmetric to the airflow, like an aircraft delta wing, but rather lies with the lower spar nearly parallel to the water, the airflow is not symmetric. However, the presence of the water, close to the lower spar and parallel to it, makes the airflow behave roughly like the airflow over half of a delta wing, as though a "reflection" in the water provided the other half (apart from a narrow gap near the water, which causes a small difference there).

This can clearly be seen in Marchaj's wind tunnel photos published in Sail Performance: Techniques to Maximise Sail Power. The vortex on the top spar of the sail is much larger, covering most of the sail area, while the lower vortex is very small and stays close to the spar. Marchaj attributes the large lifting power of the sail to lift generated by the vortices, while others attribute the power to a favourable mix of aspect ratio, camber and (lack of) twist at this point of sail.[3][4] 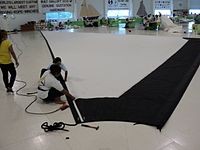 Crab claw sail being constructed for Hot Buoys trimaran. Notice pocket in right hand edge of sail to hold spar. Second spar in this particular configuration is not required since a bolt rope holds the sail's upper edge and the mast is located in the back of the sailboat.