Craig Robert Stadler (born June 2, 1953) is an American professional golfer who has won numerous tournaments at both the PGA Tour and Champions Tour level.

Stadler was born in San Diego[1] His father started him in golf at age four,[2] and he displayed a talent for golf early in life. Stadler attended La Jolla High School. He won the 1973 U.S. Amateur, while attending the University of Southern California, where he was a teammate of future PGA Tour winners Mark Pfeil and Scott Simpson. Stadler was an All-American all four years – first-team his sophomore and junior years; second-team his freshman and senior years.[3] Stadler finished college in 1975 and turned professional in 1976.[1]

Stadler began playing on the Champions Tour upon becoming eligible in June 2003. His greatest successes came during his first two years of eligibility; he was the leading money winner in his first full year on that tour in 2004. Stadler underwent total left-hip-replacement surgery in Los Angeles on September 15, 2010, which limited his playing time going forward.[2]

Very popular with the galleries, Stadler is affectionately called "The Walrus" for his portly build and ample mustache. He currently lives in Denver, Colorado. His son Kevin is also a PGA Tour champion.[2] His brother Gary Stadler is a Billboard-charting recording artist.[4]

Stadler announced that the 2014 Masters Tournament, his 38th and in which he played with Kevin, was his last. 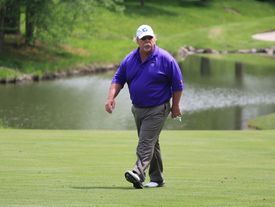 Stadler at the 2011 Principal Charity Classic.

DNP = Did not play
WD = Withdrew
CUT = missed the half-way cut
"T" indicates a tie for a place
Green background for wins. Yellow background for top-10