Crail probably dates from at least as far back as the Pictish period, as the place-name includes the Pictish/Brythonic element caer, 'fort', and there is a Dark Age cross-slab preserved in the parish kirk, itself dedicated to the early holy man St. Maelrubha.

Crail became a Royal Burgh in the 1178.[4] Robert the Bruce granted permission to hold markets on a Sunday, in the Marketgait, where the Mercat Cross now stands in Crail. This practice was still continuing in the 16th century, causing concern in the freshly puritanical circles of Edinburgh such that John Knox was moved to deliver a sermon in Crail Parish Church, damning the fishermen of the East Neuk for working on a Sunday. Despite the protests, the markets continued and were amongst the largest in Europe for their time.[5]

James V (the father of Mary Queen of Scots) sent for his wife, Mary of Guise, whom he had recently married by proxy in Paris, and she landed in Crail in June 1538. According to Antonia Fraser, "Accompanied by a navy of ships under Lord Maxwell, and 2,000 lords and barons whom her new husband had sent from Scotland to fetch her away, Queen Mary landed at Crail in Fife on 10 June 1538, just over a year since the landing of Queen Madeleine. She was formally received by the king at St Andrews a few days later with pageants and plays performed in her honour, and a great deal of generally blithe rejoicing, before being remarried the next morning in the Cathedral of St Andrews."[6] 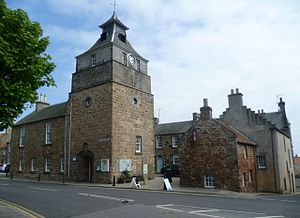 Crail Tolbooth (on the left)

Built around a harbour, it has a particular wealth of vernacular buildings from the 17th to early 19th centuries, many restored by the National Trust for Scotland, and is a favourite subject for artists. The most notable building in the town is the 13th-century parish church, technically St Mary's, but commonly known just as Crail Parish Church. Though much altered, this is one of Scotland's most beautiful ancient churches, with a fine western tower with small spire, and a double arcade of round pillars of variegated red sandstone in the nave. The side walls were rebuilt in Regency times, and the large pointed windows, filled with panes of clear glass held by astragals rather than leads, allow light to flood into the interior. The unaisled chancel, now housing a huge organ, has been shortened. The church retains some 17th-century woodwork, and there is an early Christian cross-slab of unusual form (perhaps 10th century), formerly set in the floor, on display.

The large Kirkyard surrounding the building has a fine collection of monuments and stones dating from the late 16th century onwards.

Other historic buildings in Crail are the tollbooth, with a tower dating from about 1600, which stands on its own in the large marketplace, and the doo'cot (Scots for dovecot) of the town's otherwise vanished Franciscan Friary. The Customs House on the Shoregate dates from the 17th century.

Crail once had a royal castle above the harbour (perhaps this was the site of the 'fort'). The site is still visible as an open garden, but little or nothing of the structure survives above ground. A Victorian 'turret' jutting out from the garden wall recalls the Castle (visible in the photograph reproduced above).

The Tolbooth in the centre of the town has a characteristic tower and a European style roof, similar to buildings in Holland. The weather-vane on the church spire is in the form of a smoked haddock (known locally as a Crail Capon) rather than the traditional cockerel form.[7] The curved roof form on the tower evidences the European influence of the 16th century, and is architecturally described as a Dutch spire (several other contemporary examples exist in Scotland). The bell inside was cast in Holland and bears the date 1520, and is a permanent reminder of the town’s links with the Dutch. Inside the Crail Tolbooth there is a part-time library. [5]

The harbour is known to have been substantially complete by 1583. The extension of 1828 to the west pier of Crail Harbour is the work of Robert Stevenson.[8]

On the beach beside the harbour, there are fossilised trees related to Horsetails, dating back to the Carboniferous geological period.

The Crail Golfing Society is the seventh oldest in the world, formed in 1786. Their oldest course, Balcomie, was formally laid out by Tom Morris Sr. in 1894, but competitions had been played there since the 1850s. Despite the fact that the ‘home’ of golf is now Crail’s neighbour, St Andrews, Crail was the first to have a golf course.

Crail Aerodrome, to the north of the town, started life as a naval air station during the First World War. In the runup to the Second World War it became HMS Jackdaw. Polish soldiers stationed at Crail during the Second World War helped the Archdiocese of St Andrews and Edinburgh purchase the disused United Presbyterian Church (built 1859). In 1942, it become Most Holy Trinity Church. The Church has recently been renovated and contains an icon to Our Lady of Poland painted by one of the Polish soldiers.

After the war, the airfield was taken over by the Royal Navy and renamed HMS Bruce. After closure, the Joint Services School for Linguists (JSSL) was based here in the 1950s. JSSL was founded in 1951 by the British armed services to provide language training, principally in Russian, and largely to selected conscripts undergoing National Service. It was initially located at three main sites near Bodmin, Caterham and Cambridge, run respectively by the Army, Navy and RAF. In 1956 the three were amalgamated at Crail. The school closed with the ending of conscription in 1960. It had many famous alumni.

The airfield site now is home to Crail Raceway. It hosts events every second Sunday of the month, and lets drivers compete with their own vehicles. Most commonly drag racing as been at the core of the Raceway's activities throughout its life, but especially in more recent years drifting has become an attraction at this track.[citation needed]