Cranbrook is a small town in Kent in South East England which was granted a charter in 1290 by Archbishop Peckham, allowing it to hold a market in the high street. Located on the Maidstone to Hastings road, it is five miles north of Hawkhurst. The smaller settlements of Swattenden, Colliers Green and Hartley lie within the parish. Baker's Cross is on the outskirts of the town.

The place name Cranbrook derives from Old English cran broc, meaning Crane Marsh, marshy ground frequented by cranes (although more probably herons). Spelling of the place name has evolved over the centuries from Cranebroca (c. 1100); by 1226 it was recorded as Cranebroc, then Cranebrok. By 1610 the name had become Cranbrooke, which evolved into the current spelling.[1][2]

In medieval times, Cranbrook was a centre of the Wealden cloth industry; and iron-making was carried on at Bedgebury on the River Teise. The church here was dedicated to St Dunstan. Called the "Cathedral of the Weald",[3] its 74 feet-high tower, completed in 1425, has a wooden figure of Father Time and his scythe on the south face. It also contains the prototype for the Big Ben clock in London.[3] 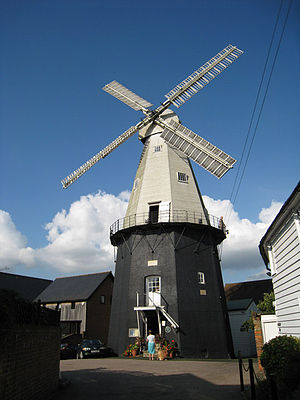 Cranbrook had a number of watermills and windmills over the centuries. There were about seventeen watermills around Cranbrook, all on tributaries of the River Beult.

There were four windmills in Cranbrook over the centuries, one of which survives today.

This was a smock mill with common sails and winded[5] by hand. It was marked on the Ordnance Survey map covering the area which was published between 1858 and 1872. The mill was last worked in 1876 and was demolished on 9 August 1902. The mill stood 1¾ miles (2.8 km) north north east of the church.[4]

One of the surviving Kent windmills, the Union Mill, was built for Henry Dobell in 1814. After Dobell went bankrupt in 1819, the mill was run by a union of creditors until 1832. The Russell family ran it for the next 128 years, when it was sold to Kent County Council, who have restored it. The mill is kept in working order to this day. It stands ¼ mile (400 m) southeast of the church.[4]

Cranbrook has around 7,000 residents. It is the smallest town in Kent.[6] The junction of the A262 (Lamberhurst – Biddenden) and the A229 (Rochester – Hawkhurst) pass near Cranbrook.

The first bank was opened in Cranbrook in 1803 by Samuel Waddington. It closed in 1805. In 1804, the Cranbrook Bank was opened. It changed its name to the Weald of Kent Bank in 1812 and then to Bishop & Co's Bank in 1813 before being declared bankrupt in October 1814.[7] As of 2012, Cranbrook is served by branches of Barclays, Lloyds TSB, National Westminster Bank.[8]

There are three secondary schools in Cranbrook, all of which are co-educational:

Cranbrook Church of England Primary School, is a mixed 4-11 school set in beautiful surroundings.[9] It was originally located in a manor house. The house was said to have been visited by Queen Elizabeth I. After the original building burnt down, the school moved to a site to the north of the churchyard and Jockey Lane. The primary school remained on this site for about a century. In 1985, the school moved to its current location in Carriers Road where it recently celebrated its 25th anniversary of the new site and buildings.

Growth of the town's population and the collection of temporary classrooms and 1960s prefabs yielded to construction in 1985 of a new building at the end of Carriers Road, where the school remains. With the new school, all the pupils came together under one roof. Barely three years after its opening, growth in the town's population forced purchase of additional temporary classrooms. Almost all of the buildings of the old school were knocked down to make way for a development of sheltered accommodation for old people.

The only building to escape the bulldozer was the south wing, which had contained the three classrooms of the infant school (the first three years). This building was gutted and converted to a surgery for general practice. A family planning clinic was built west of it. Sadly the old school's collection of formalin-pickled amphibians, reptiles and soft-bodied sea creatures disappeared when the school moved to its new premises.

Colliers Green Primary School is also within Cranbrook parish, to the north-west of the town.

There is also a pre-school located in the centre of the town: Rainbow Pre-school, which provides early years education for those in the Weald.

The Cranbrook Football Club seniors play on Saturday afternoons in the East Sussex Football League. Their home ground is at Angley School, Cranbrook. The juniors play in The Weald Friendly League and Crowborough Junior League. Home matches are played on the Ball Field, Cranbrook on Sunday mornings. Age groups are Under 9s, 10s, 11s and 13s.

Cranbrook Rugby Football Club (CRFC) play their home matches on the various rugby pitches situated around the town, including Rammell and Scott Field. The club house is based at the Cranbrook Rugby Club, on Angley Road. Age groups range from Under 7s to the senior adult teams.

There is a Cranbrook Joggers club that run during the week for beginners and intermediates. Routes are around Angley Woods and Bedgebury Forest.

The Cranbrook Town Band, founded in the 1920s, is a British-style brass band, which performs regular concerts in the Queen's Hall, St Dunstan's Church and around Kent.

The Weald Sports Centre has indoor and outdoor facilities, including four tennis courts, an indoor sports hall, a swimming pool and a dance studio.

Cranbrook is raising funds to build a new community centre by 2012.[10]

During the 19th century, a group of artists known as the "Cranbrook Colony" were located here. The Colony artists tended to paint scenes of domestic life in rural Kent - cooking and washing, children playing, and other family activities.

Formerly served by the Hawkhurst Branch Line, Cranbrook railway station stopped operations in 1961. The nearest operating station is at Staplehurst.

Cranbrook is the name of a hymn tune written by Canterbury cobbler Thomas Clark around 1805, and later used as a tune for the Christmas hymn "While Shepherds Watched Their Flocks". The tune later became associated with the Yorkshire song "On Ilkla Moor Baht 'at".[11] Cranbrook, British Columbia, Canada was named by Colonel James Baker for his hometown of Cranbrook, Kent.