Abrams became an armor officer early in the development of that branch and served as a tank company commander in the 1st Armored Division in 1940.

During World War II, he served in the 4th Armored Division, initially as regimental adjutant (June 1941 – June 1942), battalion commander (July 1942 – March 1943), and regiment executive officer (March 1943 – September 1943) with the 37th Armor Regiment. In September 1943, a reorganization of the division redesignated the 37th Armor Regiment to the 37th Tank Battalion, which he commanded; he commanded Combat Command B of the division during the Battle of the Bulge. During this time he was promoted to the temporary ranks of major (February 1942), lieutenant colonel (September 1943), and colonel (April 1945).

During much of this time, the 4th Armored Division (led by the 37th Tank Battalion) was the spearhead for General Patton's Third Army, and he was consequently well known as an aggressive armor commander. By using his qualities as a leader and by consistently exploiting the relatively small advantages of speed and reliability of his vehicles, he managed to defeat German forces that had the advantage of superior armor and superior guns. He was twice decorated with the Distinguished Service Cross, second only to the Medal of Honor, for extraordinary heroism on September 20 and December 26, 1944.

Abrams was known as an aggressive and successful armor commander. General George Patton said of him: "I'm supposed to be the best tank commander in the Army, but I have one peer — Abe Abrams. He's the world champion."[3] Frequently the spearhead of the Third Army during World War II, Abrams was one of the leaders in the relief effort that broke up the German entrenchments surrounding Bastogne and the 101st Airborne Division during the Battle of the Bulge. In April, 1945 he was promoted to (temporary (brevet)) colonel but reverted to lieutenant colonel during World War II demobilization.

He was noted for his concern for soldiers, his emphasis on combat readiness, and his insistence on personal integrity.[citation needed]

Following the war he served on the Army General Staff (1945–46), as head of the department of tactics at the Armored School, Fort Knox (1946–48), and graduated from the Command and General Staff College at Fort Leavenworth (1949).

He commanded the 63rd Tank Battalion, part of the 1st Infantry Division, in Europe (1949–51). He was again promoted to colonel and commanded the 2nd Armored Cavalry Regiment (1951–52). These units were important assignments due to the Cold War concern for potential invasion of western Europe by the Soviet Union. He then attended and graduated from the Army War College in 1953.

Due to his service in Europe and his War College tour, he joined the Korean War late in the conflict. He successively served as chief of staff of the I, X, and IX Corps in Korea (1953–1954).

Upon return from Korea he served as Chief of Staff of the Armor Center, Fort Knox (1954–1956). He was promoted to brigadier general and appointed deputy chief of staff for reserve components at the Pentagon (1956–1959). He was assistant division commander of 3rd Armored Division (1959–60) and then commanded the division (1960–62) upon his promotion to major general. He was then transferred to the Pentagon as deputy Chief of Staff for Operations (1962–63), then was promoted to lieutenant general and commanded V Corps in Europe (1963–1964). 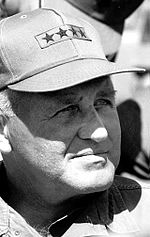 Abrams was promoted to general in 1964 and appointed Vice Chief of Staff of the United States Army, but not before being seriously considered as a candidate for Chief of Staff. Due to concerns about the conduct of the Vietnam War, he was appointed as deputy to General William Westmoreland, head of the Military Assistance Command in Vietnam, in May 1967. Abrams would succeed Westmoreland as commander on June 10, 1968, although his tenure of command was not marked by the public optimism of his predecessors, who were prone to press conferences and public statements. While Westmoreland had for years run the war using search-and-destroy tactics, these gave way to the clear-and-hold strategies that Abrams was keen to implement. Under his authority, American forces were broken up into small units that would live with and train the South Vietnamese civilians to defend their villages from guerrilla or conventional Northern incursions with heavy weapons. Abrams also devoted vastly more time than his predecessor had to expanding, training, and equipping the ARVN.

In contrast to Westmoreland, Abrams implemented counterinsurgency tactics that focused on winning the hearts and minds of the Vietnamese rural population. A joint military-civilian organization named CORDS under CIA official William Colby carried out the hearts and minds programs. According to one colonel cited in "Men's Journal", there was more continuity than change in Vietnam after Abrams succeeded Westmoreland.[lower-alpha 1]

This hearts and minds strategy was successful in reducing the influence of the guerrilla forces in South Vietnam, but the Vietnam War increasingly became a conventional war between the military forces of South Vietnam and North Vietnam. Following the election of President Richard Nixon, Abrams began implementing the Nixon Doctrine referred to as Vietnamization. The doctrine aimed to decrease U.S. involvement in Vietnam. With this new goal, Abrams had decreased American troop strength from a peak of 543,000 in early 1969 to 49,000 in June 1972. The South Vietnamese forces with aerial support from the United States repelled a full-scale NVA Easter Offensive in 1972. That same year, Abrams stepped down from the Military Assistance Command. However, while Abrams was changing the way the war was fought, the prolonged efforts and expense of the war had by then exhausted much of the American public and political support. Abrams disdained most of the politicians with whom he was forced to deal, in particular Robert McNamara and McGeorge Bundy, and had an even lower opinion of defense contractors whom he accused of war profiteering.

Abrams was also in charge of the Cambodian Incursion in 1970. President Nixon seemed to hold Abrams in high regard, and often relied on his advice. In a tape-recorded conversation between Nixon and Secretary of State Henry Kissinger on December 9, 1970, Nixon told Kissinger about Abrams' thoughts on intervention in Cambodia that "If Abrams strongly recommends it we will do it."[5] Troop levels in Vietnam eventually reached 25,000 in January 1973, at the time of the four power Paris Peace Accords. Although it occurred before he assumed total command, he bore the brunt of fallout from the My Lai massacre in March 1968.

General Abrams was appointed Chief of Staff of the United States Army in June 1972, after serving in the Military Assistance Command. However, he was not confirmed by the United States Senate until October 1972 due to political repercussions involving accusations of unauthorized bombings. It has also been reported that Congress had delayed the confirmation to question the administration's war in Cambodia.

During this time, Abrams began the transition to the all-volunteer Army, also known as Project VOLAR. In January 1974, Abrams directed the formation of a Ranger battalion. The 1st Battalion (Ranger), 75th Infantry, was activated and parachuted into Fort Stewart, Ga. on July 1, 1974. The 2nd Battalion (Ranger), 75th Infantry followed with activation on October 1, 1974. The 3rd Battalion, 75th Infantry (Ranger), and Headquarters and Headquarters Company, 75th Infantry (Ranger), received their colors on October 3, 1984, at Fort Benning, Ga. The 75th Ranger Regiment was designated in February 1986.[6] The modern Ranger battalions owe their existence to Abrams and his charter, "The battalion is to be an elite, light, and the most proficient infantry in the world. A battalion that can do things with its hands and weapons better than anyone. The battalion will contain no "hoodlums or brigands" and if the battalion is formed from such persons, it will be disbanded. Wherever the battalion goes, it must be apparent that it is the best." Abrams would serve in this position until his death, due to complications from surgery in September 1974. A heavy cigar smoker, Abrams suffered from lung cancer.

Abrams was born in Springfield, Massachusetts, on September 15, 1914, the son of Nellie Louise (Randall) and Creighton Abrams, a railroad worker.[7] He married Julia Berthe Harvey (1915–2003) in 1936. Julia Abrams founded the Army group of Arlington Ladies and devoted time to humanitarian causes.[8]

Abrams converted to Catholicism during his time in Vietnam.[citation needed]

A heavy cigar smoker, Abrams died of complications from surgery in Washington D.C. at Walter Reed Army Medical Center after having a cancerous lung removed. He is buried with his wife in Section 21 of Arlington National Cemetery. Julia Abrams was 87 when she died on Jan 31, 2003 at the same hospital.