From Infogalactic: the planetary knowledge core
Jump to: navigation, search
For the Cynic philosopher, see Crescens the Cynic. For the 2nd-century martyr of Tivoli, see St. Symphorosa.

Crescens was an individual who appears in the New Testament. He was said to be a missionary in Galatia and became a companion of Paul. The name 'Crescens' is the present-active participle of the Latin word crescere, and means 'increasing'. 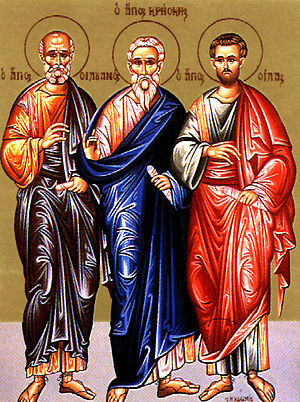 Icon of the Apostle Crescens (center), with Apostles Silvanus and Silas of the Seventy.

Crescens, a companion of Paul during his second Roman captivity, appears but once in the New Testament, when he is mentioned as having left the Apostle to go into Galatia: "Make haste to come to me quickly", Paul writes to Timothy, "for Demas hath left me, loving this world, and is gone to Thessalonica, Crescens into Galatia, Titus into Dalmatia" (2 Timothy 4:8-10). All commentators agree in ranking Crescens with Titus rather than with Demas, and in seeing here, therefore, a reference to a missionary journey into Galatia. This term, in New Testament times, might mean either Gaul or the Roman province of Galatia in Asia Minor, where Paul had labored so much; and here it has been interpreted in either sense. In the other passages where it occurs in the New Testament, however, it denotes Galatia, and most probably it would be so understood here by Timothy, especially as the other regions mentioned are likewise to the east of Rome. Moreover, Paul might easily have a reason for sending a disciple to visit his old Churches in Galatia, while there is no proof that he had an active interest in Gaul.

Accordingly, the earliest tradition (Apostolic Constitutions, VII, 46) represents Crescens as a bishop of the Churches in Galatia. Later traditions, on the other hand, locate him as Bishop of Vienne in Gaul, also at Mainz on the Rhine. But the earliest known traditions of Gaul itself record nothing of this disciple of the Apostle as a founder of their Churches, and the belief is thought to have arisen later from the desire of an Apostolic origin. The claims of Vienne have been most strongly urged; but they are based upon the mistaken identification of its first bishop, Crescens, who lived in the third century, with the disciple of Paul. As little can be said for Mainz. The reading of certain manuscripts (Sinaiticus, Ephræmi), which have "Gallia" instead of "Galatia", has also been advanced in favour of Gaul; but the traditional reading is supported by the great mass of manuscript evidence. Crescens is mentioned as one of the Seventy Apostles of Christ by Pseudo-Dorotheus. His martyrdom in Galatia, under Trajan, commemorated on 27 June by the Roman Martyrology, lacks the confirmation of older Martyrologies.

The Eastern Orthodox Church honours him on 30 July, as one of the Seventy.