From Infogalactic: the planetary knowledge core
Jump to: navigation, search
For other uses, see Crescent (disambiguation). 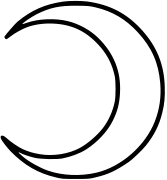 An example of an artistic crescent — in this case a large circle with a smaller one removed. 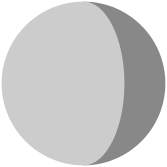 An astronomically correct crescent shape (in blue), complemented by a gibbous shape.

In art and symbolism, a crescent (US: /ˈkrɛsənt/,[1] UK: /ˈkrɛzənt/[2]) is generally the shape produced when a circular disk has a segment of another circle removed from its edge, so that what remains is a shape enclosed by two circular arcs of different diameters which intersect at two points (usually in such a manner that the enclosed shape does not include the center of the original circle).

In astronomy, a crescent is the shape of the lit side of a spherical body (most notably the Moon) that appears to be less than half illuminated by the Sun as seen by the viewer. Mathematically, assuming the terminator lies on a great circle, such a crescent will actually be the figure bounded by a half-ellipse and a half-circle, with the major axis of the ellipse coinciding with a diameter of the semicircle. The direction in which the "horns" (the points at the intersection of the two arcs) face indicates whether a crescent is waxing (also young, or increasing) or waning (also old, or decreasing). Eastward pointing horns (pointing to the left, as seen from the Northern hemisphere) indicate a waxing crescent, whereas westward pointing horns (pointing to the right, as seen from the Northern hemisphere) indicate a waning crescent. Note that the directions the horns point relative to the observer are reversed in the Southern hemisphere.

The word crescent is derived etymologically from the present participle of the Latin verb crescere "to grow", thus meaning "waxing" or "increasing", and so was originally applied to the form of the waxing moon (luna crescens). The English word is now commonly used to refer to either the waxing or waning shape. In the technical language of blazoning used in heraldry, the word "increscent" refers to a crescent shape with its horns to the left, and "decrescent" refers to one with its horns to the right.[3]

In the ancient world 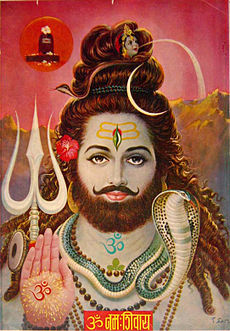 The Hindu god Shiva is depicted with the decrescent moon over his head in his locks.

The crescent is one of the oldest symbols known to humanity. Together with the sun, it appeared on Akkadian seals as early as 2300 BC and from at least the second millennium BC it was the symbol of the Mesopotamian Moon gods Nanna in Sumer and Sin in Babylonia, Sin being the "Lamp of Heaven and Earth". The crescent was well known in the Middle East and was transplanted by the Phoenicians in the 8th century BC as far as Carthage (now in Tunisia). The crescent and star also appears on pre-Islamic coins of South Arabia.[4]

Under the Byzantine Empire

Anna Notaras, daughter of the last Megas Doux of the Byzantine Empire Loukas Notaras, after the fall of Constantinople and her emigration to Italy, made a seal with her coat of arms which included Two Lions holding above the crescent a cross or a sword.[5]

File:Tagh1.jpg
Taq-e Bostan, from the era of Sassanid Empire of Persia (pre-Islamic era). Note the crescent above the arch.

Coin of the Sassanid king Kavadh II. Star and crescent can be found on most of Sassanian coins.

The Kingdom of Aksum of modern Ethiopia practiced a polytheistic religion and after conversion to Christianity in 330 AD they replaced the crescent in their coin with the cross.

The oldest representations of flags with the crescent are on 14th-century navigational charts, or portolanos, and manuscript of a Franciscan friar. There are discrepancies between these sources as far as the colours of fields or crescents are concerned. However, an account of flags from the Middle East and North Africa by the author of Libro del Conoscimiento confirms the widespread use of the crescent on flags in that region. These include: the flags of the kings of Damascus and Lucha (yellow with a white crescent); Cairo (white with a blue crescent); Mahdia in Tunisia (white with a purple crescent); Tunis (white with a black crescent); and Buda (white with a red crescent). Some of the 14 and 15th-century portolanos show the flag of Tunis as red with one or two crescents, which is presented on several portolanos as a symbol of the Ottoman Empire. From 16th to the 18th centuries this flag is usually shown with three white crescents; in 1793 the number of crescents was reduced to one and an eight-pointed star was later added on, when the rule of the Ottoman Empire ended, Turkey was the only Muslim state regarded as a world power at the time. Its flag was known from West Africa to the Far East, and helped to popularize the crescent and star among the Muslim populations of many countries of Asia and Africa. Muhammad Ali, who became Pasha of Egypt in 1805, introduced the first national flag of Egypt, red with three white crescents, each accompanied by a white star. This flag, in turn, influenced the design of the first flag of independent Egypt, which was green with a white crescent and three white stars to symbolize the peaceful co-existence of Muslims, Christians and Jews. During the past two centuries the crescent and star has featured on the flags of other Muslim countries.

Though the crescent was originally a secular symbol of authority for Muslim rulers, it is now often used to symbolize the Islamic faith. However, the crescent was not a symbol used for Islam by Muhammad or any other early Muslim rulers, as the Islamic religion is, in fact, against appointing "holy symbols" (so that during the early centuries of Islam, Muslim authorities simply didn't want any geometric symbols to be used to symbolize Islam, in the way that the cross symbolizes Christianity, the menorah was a commonly occurring symbol of Judaism, etc.). This is why early Islamic coins were covered with Arabic writing, but contained no visual symbols.

Despite this mixed history, many Islamic nations and charities use the crescent symbol on their flags or logos (e.g. Turkey, The Red Crescent, etc. — though currently none of the Arab states in Arabia or the Mashreq have crescents on their flags).

Note that in the case of an astronomical crescent, such as the moon observed in the sky, the outer arc will be 180° (a half-circle as previously mentioned), while the Islamic crescent symbol (Arabic هلال hilāl) is often shown with an outer arc significantly greater than 180° (as seen in the illustrations below). 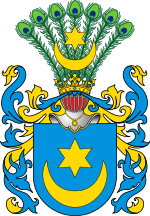 Leliwa. Polish noble coat of arms with crescent as a heraldic symbol.

The crescent is also used as a heraldic symbol. While this usage is not directly affiliated with Islam, in some instances one can trace the introduction of the crescent in European heraldry to Crusaders returning home. The roots of the Slavic crescent can be traced to the old Slavic pagan beliefs. In English and Canadian heraldry a crescent is the cadence mark of a second son.

The crescent as a neo-pagan symbol of the Triple Goddess.

In Roman Catholic iconography, Mary is often depicted as the Woman of the Apocalypse from the New Testament's Book of Revelation as described in chapter 12, "with the [crescent] moon under her feet, and on her head a crown of twelve stars." The most well known of these is the icon of the Virgin of Guadalupe.

The crescent symbol is also used to represent the moon in astronomy and astrology, and to represent silver (the metal associated with the moon) in alchemy, where, by inference, it can also be used to represent qualities that silver possesses. (Alchemy and Symbols, By M. E. Glidewell, Epsilon.)

The crescent is the symbol of Gamma Phi Beta sorority.

The crescent printed on military ration boxes is the Department of Defense symbol for subsistence items. The symbol is used on packaged foodstuffs but not on fresh produce or on items intended for resale.[6]

New Orleans is nicknamed The Crescent City, and a crescent, or crescent and star, is used to represent the city officially — notably in its police department.[7] The origin is the crescent shape of the old city, hugging the East Bank of the Mississippi River. The historical crescent, which includes the French Quarter and was one of the few places where settlement was possible before the construction of the levee system, did not flood during Hurricane Katrina. The choice of the star and crescent symbol is a relic of the krewes, many of which adopted "Oriental" costume and rituals, like other societies of the 19th century. A crescent also appears on the South Carolina state flag, as well as the flag of Singapore. 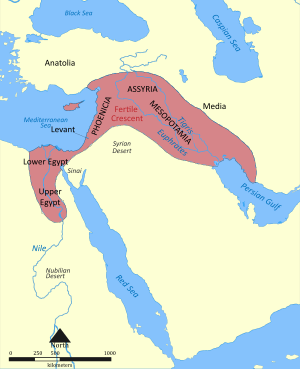