Crespi d'Adda is a historical settlement in Capriate San Gervasio, Lombardy, northern Italy. It is an outstanding example of the 19th and early 20th-century "company towns" built in Europe and North America by enlightened industrialists to meet the workers' needs. The site is still intact and is partly used for industrial purposes, although changing economic and social conditions now threaten its survival.[1] Since 1995 it has been on UNESCO's list of World Heritage Sites. 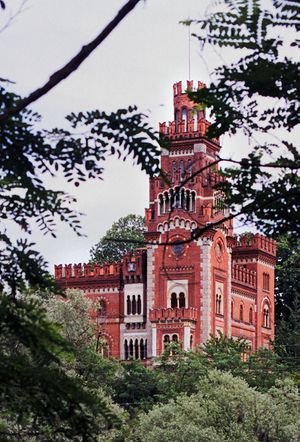 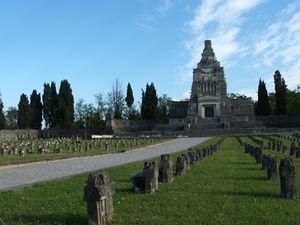 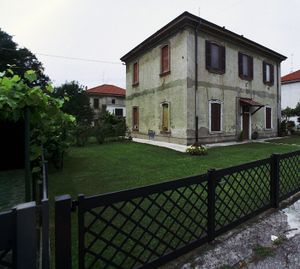 A factory worker’s house with garden.

In 1869 Cristoforo Benigno Crespi, a textile manufacturer from Busto Arsizio (Varese), bought the 1 km valley between the rivers Brembo and Adda, to the south of Capriate, with the intention of installing a cotton mill on the banks of the Adda.[2]

Cristoforo Crespi introduced the most modern spinning, weaving and finishing processes in his Cotton Mill.[3] The Hydroelectric power plant in Trezzo, on the Adda river just a few Km upwards, was built up around 1906 for the manufacturer Cristoforo Benigno Crespi.[4] The settlement which was built in 1878 next to the cotton-mill was a village, a residential area provided with social services such as a clinic, a school building, a theatre, a cemetery, a wash-house and a church.[5]

[6] [7] Both the town and the factory were illuminated thanks to electric light.[6] The village of Crespi d'Adda was the first village in Italy to have modern public lighting.[8] The workers houses, of English inspiration, are lined up in order along parallel roads to the East of the factory.[3] A tree-lined avenue separates the production zone from the houses, overlooking a chequer-board road plan.[9] The whole architecture and town planning (except the first spinning department, created by engineer Angelo Colla), was submitted to the architect Ernesto Pirovano. For about fifty years Pirovano, helped by the engineer Pietro Brunati, ran the construction of the village.[6]

In 1889 the son of Cristoforo, Silvio, started work in the factory as a director, after spending time in Oldham, England.[6] He turned away from the large multiple-occupancy blocks in favour of the single-family house, with its own garden, which he saw as conducive to harmony and a defence against industrial strife. He put this policy into practice in 1892 and the years that followed, with success, since there was no strike or other form of social disorder for the fifty years of Crespi management.[2]

The great depression of 1929 and the harsh fascist fiscal policy resulted in the Crespi family being obliged to sell the entire town to STI, the Italian textile enterprise, which transferred it to the Rossarl e Varzi company in 1970. It then passed to the Legler company, which sold off most of the houses. It was last in the hands of the Polli industrial group, which employed some 600 people, as compared with the 3200 employed during the years of maximum activity.[2]

Today the village is inhabited by a community largely descended from the original workers. The factory stopped production only in 2004, its field of activity throughout its working life having been cotton textile production.