Creswell Crags is a limestone gorge on the border between Derbyshire and Nottinghamshire, England, near the villages of Creswell and Whitwell. The cliffs in the ravine contain several caves that were occupied during the last ice age, between around 43,000 and 10,000 years ago. Its caves contain the northernmost cave art in Europe.

The caves contain occupation layers with evidence of flint tools from the Mousterian, proto-Solutrean, Creswellian and Maglemosian cultures. They were seasonally occupied by nomadic groups of people during the Upper Palaeolithic and Mesolithic periods. Evidence of Neolithic, Bronze Age, Roman and post-medieval activity has also been found there. There is evidence of Neanderthal occupation 50,000–60,000 years ago, a brief Gravettian occupation around 32,000 years ago and use of all the main caves during the Magdalenian around 14,000 years ago.[1] The site is open to the public and has a visitor centre with a small museum of objects associated with the caves, including a stuffed cave hyena.

As a result of its unique features, Creswell Crags has been designated as a Site of Special Scientific Interest (SSSI).[2][3]

The site was the subject of the BBC Radio 4 documentaries Unearthing Mysteries and Nature and featured in the 2005 BBC Two television programme Seven Natural Wonders, as one of the wonders of the Midlands.

The most occupied caves were: 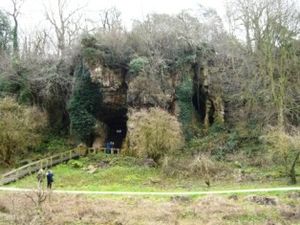 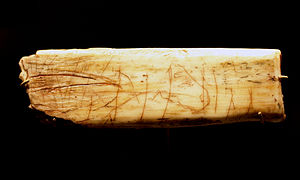 A leaf-point from Creswell Crags, at Derby Museum.[4]

A bone engraved with a horse's head and other worked bone items along with the remains of a variety of prehistoric animals have been found in excavations since 1876. The "Ochre Horse" was found on 29 June 1876 at the back of the western chamber in the Robin Hood Cave.[5]

In April 2003, engravings and bas-reliefs were found on the walls and ceilings of some of the caves, an important find as it had previously been thought that no British cave art existed. The discoveries, made by Paul Bahn, Sergio Rippoll and Paul Pettitt, included an animal figure at first thought to be an ibex but later identified as a stag. Later finds included carvings on the ceiling of Church Hole Cave, the rarity of which made the site one of international importance.[7]

To this day the finds at Creswell Crags represent the most northerly finds in Europe. Their subject matter includes representations of animals including bison and, arguably, several different bird species. Some workers, however, consider that the "bird" figures are more likely to be female anthropomorphs. The engravers seem to have made use of the naturally uneven cave surface in their carvings and it is likely that they relied on the early-morning sunlight entering the caves to illuminate the art.

Thin layers of calcium carbonate flowstone overlaying some of the engravings were dated using the uranium-series disequilibrium method, which showed the oldest of these flowstones to have formed at least 12,800 years ago.[6] This provides a minimum age for the underlying engraving. The scientists and archaeologists concluded that it was most likely the engravings were contemporary with evidence for occupation at the site during the late glacial interstadial around 13,000–15,000 years ago. Most of the engravings are found in Church Hole Cave on the Nottinghamshire side of the gorge. Since this discovery, however, an engraved reindeer from a cave on the Gower peninsula has yielded two minimum dates (through uranium-series dating) of 12,572 years BP and 14,505 years BP.[8]