The Cretan State (Greek: Κρητική Πολιτεία, Kritiki Politia; Ottoman Turkish: كريد دولتى‎, Girit Devleti), was established in 1898, following the intervention by the Great Powers (Britain, France, Italy, Austria-Hungary, and Russia) on the island of Crete. In 1897 an insurrection in Crete led the Ottoman Empire to declare war on Greece, which led Great Britain, France, Italy and Russia to intervene on the grounds that the Ottoman Empire could no longer maintain control. It was the prelude of the island's final annexation to the Kingdom of Greece, which occurred de facto in 1908 and de jure in 1913.

The island of Crete, an Ottoman possession since the end of the Cretan War, was inhabited by a mostly Greek-speaking population, whose majority was Christian. During and after the Greek War of Independence, the Christians of the island rebelled several times against external Ottoman rule, pursuing union with Greece. These were brutally subdued, but secured some concessions from the Ottoman government under the pressure of European public opinion. In 1878, the Pact of Halepa established the island as an autonomous state under Ottoman suzerainty, until the Ottomans reneged on that agreement in 1889.

The collapse of the Pact heightened tensions in the island, leading to another rebellion in 1895, which greatly expanded in 1896–1897 to cover most of the island. Nationalist secret societies and a fervently irredentist public opinion forced the Greek government to send military forces to the island, provoking a war with the Ottoman Empire. Although most of Crete came under the control of the Greek forces, the unprepared Greek Army was crushed by the Ottomans, who occupied Thessaly. The war was ended by the intervention of the Great Powers (Great Britain, France, Italy and Russia), who forced the Greek contingent to withdraw from Crete and the Ottoman Army to stop its advance. In the Treaty of Constantinople the Ottoman Government promised to implement the provisions of the Halepa Pact.

Establishment of the Cretan State 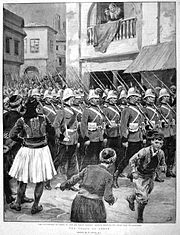 By March 1897, the Great Powers decided to restore order by governing the island temporarily through a committee of four admirals who remained in charge until the arrival of Prince George of Greece as the first High Commissioner (Greek: Ὕπατος Ἁρμοστής, Hýpatos Harmostēs) of an autonomous Crete, effectively detached from the Ottoman Empire, on 9 December 1898. On 25 August 1898, a Turkish mob massacred hundreds of Cretan Greeks, the British Consul and 17 British soldiers. As a result, the Turkish forces were expelled from the island by the Great Powers in November 1898, and an autonomous Cretan State, under Ottoman suzerainty, garrisoned by an international military force, and with its High Commissioner provided by Greece, was founded.[1]

For more details on this topic, see Theriso revolt.
File:Comité exécutif de Crète.jpg
The Cretan Executive Council in 1898. Venizelos is second from left. 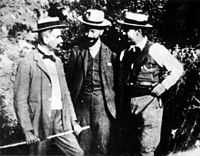 Venizelos with his partners Foumis and Manos in Theriso 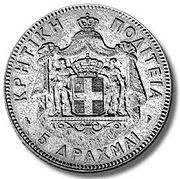 On 13 December 1898, George of Greece arrived as High Commissioner for a three-year tenure. On 27 April 1899, an Executive Committee was created, in which a young, Athens-trained lawyer from Chania, Eleftherios Venizelos, participated as Minister of Justice. By 1900, Venizelos and the Prince had developed differences over domestic policies, as well as the issue of Enosis, the union with Greece.

Venizelos resigned in early 1901, and for the next three years, he and his supporters waged a bitter political struggle with the Prince's faction, leading to a political and administrative deadlock on the island. Eventually, in March 1905, Venizelos and his supporters gathered in the village of Therisos, in the hills near Chania, constituted a "Revolutionary Assembly", demanded political reforms and declared the "political union of Crete with Greece as a single free constitutional state" in a manifesto delivered to the consuls of the Great Powers. The Cretan Gendarmerie remained loyal to the Prince, but numerous deputies joined the revolt, and despite the Powers' declaration of military law on 18 July, their military forces did not move against the rebels.

On 15 August, the Cretan Assembly voted for the proposals of Venizelos, and the Great Powers brokered an agreement, whereby Prince George would resign and a new constitution created. In the 1906 elections the pro-Prince parties took 38,127 votes while pro-Venizelos parties took 33,279 votes, but in September 1906 Prince George was replaced by former Greek prime minister Alexandros Zaimis and left the island. In addition, Greek officers came to replace the Italians in the organization of the Gendarmerie, and the withdrawal of the foreign troops began, leaving Crete de facto under Greek control.

A Constitution was promulgated in February 1907, but in 1908, taking advantage of domestic turmoil in Turkey as well as the timing of Zaimis's vacation away from the island, the Cretan deputies declared unilateral union with Greece.[2] The flag of the Cretan State was replaced by the Greek flag, all public servants took an oath to King George I of Greece, and the Greek constitution and laws were enacted on the island. This act was not recognized internationally, including by Greece, where Eleftherios Venizelos was elected Prime Minister in 1910. In May 1912, the Cretan deputies travelled to Athens and tried to enter the Greek Parliament, but were forcibly prevented from doing so by the police. Finally, Greece recognized the union and sent Stephanos Dragoumis as the island's governor-general upon the outbreak of the First Balkan War. The Great Powers tacitly recognized the fait accompli by the act of lowering their flags from the Souda fortress on 14 February 1913, and by the Treaty of London in May 1913, Sultan Mehmed V relinquished his formal rights to the island.

On 1 December, the formal ceremony of union took place: the Greek flag was raised at the Firka Fortress in Chania, with Eleftherios Venizelos and King Constantine in attendance. The Muslim minority of Crete initially remained on the island but was later relocated to Turkey under the general population exchange agreed to in the 1923 Treaty of Lausanne between Turkey and Greece.