From Infogalactic: the planetary knowledge core
(Redirected from Crişana)
Jump to: navigation, search
For other uses, see Crișana (disambiguation). 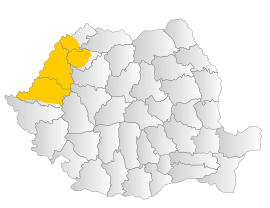 It is bounded to the east by the Apuseni Mountains, to the south by the Mureș River, to the north by the Someș River, and to the west by the Tisza River. The Romanian-Hungarian border cuts it in two.[1][2]

In ancient times, this area was settled by Celts, Dacians, Sarmatians, and Germanic peoples. In the first century BC, it was part of the Dacian Kingdom under Burebista.

Following the abolishment of the Theiß-Muresch section of the Habsburg Military Frontier (in 1750) and the abolishment of the Principality of Transylvania (in 1867), the whole area was included into the Habsburg Kingdom of Hungary, which after 1867 became one of two autonomous parts of dual monarchy of Austria-Hungary. During Habsburg administration, Crișana mostly did not had special status like that of Transylvania or the Banat; briefly, from 1850 to 1860, it was organized as the Military District of Großwardein. After disintegration of the Austro-Hungarian Empire in 1918, Crişana was divided between Romania (eastern part) and Hungary (western part).

Romanian Crișana is bounded in Romania by Maramureș to the north, Transylvania proper to the east, Banat to the south, and Hungary to the west. The region consists of the current Romanian counties of Arad (most of it), Bihor and some parts of Sălaj, Satu Mare, parts of Maramureș County(Codru, Chioar) and Hunedoara counties. Nowadays it is sometimes considered part of the historical region Transylvania, although it did not fall fully within the boundaries of the historical principality.

Hungarian Körösvidék is covered by the areas of Hajdú-Bihar County and Békés County. The southern part of Crișana, near the Mureș River, was called Pomorišje by the Serbs.

The most important cities are: