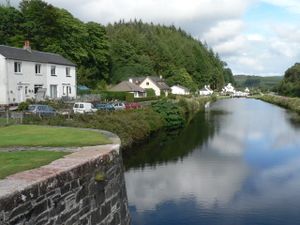 The Crinan Canal at Cairnbaan

The Crinan Canal between Crinan and Ardrishaig in Argyll and Bute in the west of Scotland is operated by Scottish Canals. The canal which opened in 1801 takes its name from the village of Crinan at its western end. Approximately Nine miles (14 km) long, the canal connects the village of Ardrishaig on Loch Gilp with the Sound of Jura, providing a navigable route between the Clyde and the Inner Hebrides, without the need for a long diversion around the Kintyre peninsula, and in particular the exposed Mull of Kintyre.[1]

The canal was built to provide a short cut for commercial sailing and fishing vessels and later Clyde puffers to travel between the industrialised region around Glasgow to the West Highland villages and islands. It was designed by civil engineer John Rennie and work started in 1794, but was not completed until 1801, two years later than planned.

The canal's construction was beset with problems including finance and poor weather. Landowners demanded high prices for their land and navvies were reluctant to leave jobs in more accessible parts of England and Scotland. The canal bank near Lochgilphead failed in 1805 and the canal's course was diverted to avoid the marshy ground. The canal's reservoirs were finished in 1809 but two years later a storm caused one to burst releasing its water and sending boulders and mud along the canal in both directions wrecking locks, the canal banks and the nearby roads.[2]

The canal company headed by the Duke of Argyle had to seek help from the government who asked Thomas Telford to assess the problems. He suggested improvements to the locks, and some parts of the canal were redesigned including the swing bridges which were replaced in cast iron in 1816.[3] The government paid for the work but the canal company lost control and it was handed to the Caledonian Canal Commissioners.[4]

Queen Victoria travelled along the canal to Crinan during a holiday in the Scottish Highlands in 1847. She was greeted at Ardrishaig and her boat was towed by four horses, two of which were ridden by postilions in royal livery. At Crinan she boarded the royal yacht Victoria and Albert.[5] Her journey made the canal a tourist attraction and gave the canal an added purpose. Passenger steamer companies operating out of Glasgow advertised the canal as the "Royal route" and by the late 1850s more than 40,000 passengers passed through Ardrishaig each year and were met by steamers to Oban at Crinan. In the 1866 a steam-powered passenger boat Linnet replaced horse-drawn boats for tourists.[2][4] Linnet remained in service until 1929.[2]

Between 1930 and 1932, new sea locks were built at either end, making the canal accessible at any state of tide.[2] The swing bridge at Ardrishaig was installed at this time.[6] The canal became the responsibility of British Waterways in 1962. On 2 July 2012 the British Waterways functions in Scotland were transferred to Scottish Canals.[7]

Today the canal is a popular route for leisure craft between the Firth of Clyde and the west coast of Scotland, used by nearly 2,000 boats annually.[2] The towpath is part of National Cycle Network route 78, which links Campbeltown, Oban, Fort William and Inverness.[8] 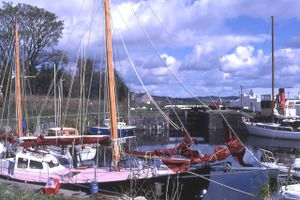 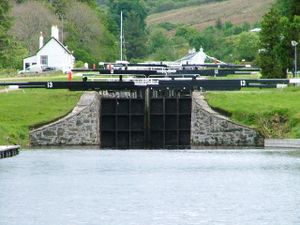 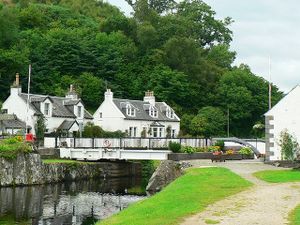 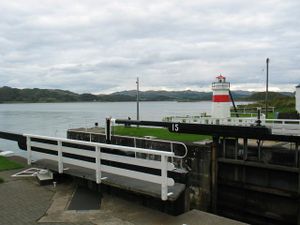 The sea lock and Crinan Lighthouse

The retractable bridge at Lock 11 replaced the original swing bridge in 1900. It is operated by a rotating handle and a cogged wheel which causes the bridge deck to roll forwards and backwards on rails and comes to rest across the lock chamber.[9] The canal has towpaths on both sides from Ardrishaig to Crinan Bridge and horses assisted unpowered craft until 1959.[10]

A song sung by Dan MacPhail in the Vital Spark -