From Infogalactic: the planetary knowledge core
Jump to: navigation, search
For other uses, see Villalpando (disambiguation). 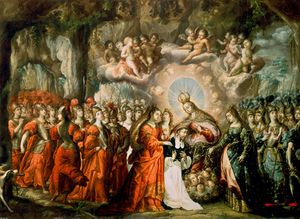 The Lactación de Santo Domingo, painted near the end of the 17th century.

Cristóbal de Villalpando (ca. 1649 – 20 August 1714) was a Mexican painter, arts administrator and captain of the guard. He painted prolifically and produced many Baroque works visible in several Mexican cathedrals, including the cathedrals in Querétaro and Mexico City, as well as a famous 1695 picture of the main square or Zócalo of Mexico City, showing the damage of the 1692 riot to the viceregal palace.[1][2]:160–163

Born in Mexico City to the influential Villalpando family, he assumed duties in the local militia as an ensign, as well as painting with Baltasar de Echave Rioja (Echave the Younger) in the Echave workshop.[3] In 1669, he married María de Mendoza, and fathered four children. Early on he received several religious commissions, both in Mexico City and in Puebla. Well preserved are his paintings in the sacristy of the Mexico City Cathedral.

Villalpando rose socially as well as militarily, gaining the rank of captain and served several times as director (veedor) of the painters' guild.[3]

Villalpando's self-portrait appears in his Apparition of Saint Michael on Mount Gargano in the sacristy of the Mexico City cathedral. His portrait is nested among the clergy at the bottom right.[4] He died in Mexico City in 1714 and was buried there.

Villalpando's early works attest to the influence of Peter Paul Rubens;[3] however, as his style continued to develop, he moved away from the extremes of vivid coloring and excessive robustness to a more measured style, using a broad palette and incorporating more of the New World painting traditions.[3] In his later work he moved away from uniform luminosity, employing greater contrast and placing artificial light sources within his paintings to add a touch of drama.[3] His work was much emulated.[3]

Villalpando tailored his style to the nature of the work and to its patron. He employed rough blots and smudges to good effect, but used meticulous brushstrokes when required.

Villalpando's early works include a number for the Puebla Cathedral, including a large painting of The Transfiguration – climaxing with the Assumption of the Virgin on the inside of the dome of the apse chapel,[3] which included themes from the eucharist.[4] For the sacristy of the Mexico City cathedral he painted[3]

Most of Villalpando's portraits have been lost, as well as others of his religious works.

Villalpando's painting of the main square of Mexico City is an important work not only for showing the major buildings and architectural features surrounding the capital's main square (Metropolitan Cathedral, palace of the viceroy, the palace of the archbishop, the town council or ayuntamiento building, and the enclosed commercial area, the Parían Market, and the canal alongside the Portal de las Flores), but also the activities of Mexico City residents of all races and classes. An important historical feature of the painting is the depiction of the fire damage to the viceroy's palace by mob in 1692. The viceroy of Mexico, Don Gaspar de Sandoval Silva y Mendoza, Count of Gelve, commissioned the painting by Mexico City's foremost artist of the late seventeenth century. Gelves was returning to Spain after a decidedly mixed record as viceroy, which saw disorder culminating in the June 1692 riot and perhaps wanted the painting as a souvenir of his period as viceroy. It is notable that Villalpando paints the ruined façade of the viceroy's palace and does not take artist's license to paint out this major historical event in Mexico City's history. Obviously, from the commercial and social activity in the Zócalo that Villalpando paints in exceptional detail, the main appears to have gone back to its normal importance. Elites in their finery brought by carriage to the square, richly stocked shops, and a plethora of Indian and casta market sellers are depicted.[2] The view has been considered metonymic, where "Villalpando equates the zócalo with Mexico City. The harmony and prosperity the scene evokes makes it almost possible to ignore the damaged façade of the viceregal palace....[2]:163 The painting, now in the private collection of Lord Methuen at Corsham Court, UK, has been used as the cover illustration for two important books on colonial Spanish America.[5][2]