The cross section is an effective area that quantifies the intrinsic likelihood of a scattering event when an incident beam strikes a target object, made of discrete particles. The cross section of a particle is the same as the cross section of a hard object, if the probabilities of hitting them with a ray are the same. It is typically denoted σ and measured in units of area.

In scattering experiments, one is often interested in knowing how likely a given event occurs. However, the rate depends strongly on experimental variables such as the density of the target material, the intensity of the beam, or the area of overlap between the beam and the target material. To control for these mundane differences, one can factor out these variables, resulting in an area-like quantity known as the cross section.

Cross section is associated with a particular event (e.g. elastic collision, a specific chemical reaction, a specific nuclear reaction) involving a certain combination of beam (e.g. light, elementary particles, nuclei) and target material (e.g. colloids, gases, atoms, nuclei). Often there are additional factors that can affect the cross section in complicated ways, such as the energy of the beam.

For a given event, the cross section σ is given by

Equivalently, if the target material is a thin slab placed perpendicular to the beam, one may express the cross section in terms of flux:

For discrete events involving a beam of particles, the cross section σ is given by: 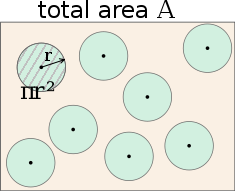 Schematically, an event is said to have a cross-section of σ if its rate is equal to that of collisions in an idealized classical experiment where:

with all other experimental variables kept the same as the original experiment.

The cross section is a scalar that only quantifies the intrinsic rate of an event. In contrast, the differential cross section dσ/dΩ is a function that quantifies the intrinsic rate at which the scattered projectiles can be detected at a given angle. Note that the symbol dσ/dΩ is merely suggestive and not meant to be read literally as a derivative of σ with respect to “Ω”.

Conventionally, a spherical coordinate system is used, with the target placed at the origin and the z-axis of this coordinate system aligned with the incident beam. The angle θ is the scattering angle, measured between the incident beam and the scattered beam and the φ is the azimuthal angle. Many types of scattering processes possess azimuthal symmetry and therefore do not depend on φ.

The differential cross section dσ/dΩ at an angle (θ, φ) is related to the rate of detection dw at that angle by

where Ω is the angular span of the detector (SI unit: sr), which is assumed to be small and have perfect detection ratio.

The cross section σ may be recovered by integrating the differential cross section dσ/dΩ over the full solid angle (4 π steradians):

It is common to omit the “differential” qualifier when the type of cross section can be inferred from context. In this case, σ may be referred to as the integral cross section or total cross section. The latter term may be confusing in contexts where multiple events are involved, since “total” can also refer to the sum of cross sections over all events.

Although the SI unit of total cross sections is m2, smaller units are usually used in practice.

When the scattered radiation is visible light, it is conventional to measure the path length in centimetres. To avoid the need for conversion factors, the scattering cross-section is expressed in cm2 and the number concentration in cm−3. The measurement of the scattering of visible light is known as nephelometry, and is effective for particles of 2–50 µm in diameter: as such, it is widely used in meteorology and in the measurement of atmospheric pollution.

In nuclear and particle physics, the conventional unit is b, where b = 10−28 m2 = 100 fm2.[1] Smaller prefixed units such as mb and μb are also widely used. Correspondingly, the differential cross section can be measured in units such as mb sr−1.

In a simple classical experiment where a single particle is scattered off a rigid target,

is the impact parameter. The differential cross section is the differential quotient of this area element by the solid angle element in the direction of the particle exit trajectory:

It describes the change in the impact parameter necessary to cause a given change in the exit trajectory direction. The definition is slightly counter-intuitive in that the independent variable (in the denominator) describes the effect and the dependent variable (in the numerator) the initial condition. The differential cross section is always taken to be positive, even though in the most frequent case of limited-range repulsive interactions, larger impact parameters cause less deflection. In rotationally symmetric problems, the azimuthal angle

is not changed by the scattering process, and the differential cross section becomes

is the angle between the incident and exit direction of the scattered particle, as shown in the figure.

In time-independent formalism of quantum scattering, the initial wave function (before scattering) is taken to be a plane wave with definite momentum k:

After the scattering takes place, it is expected that the wave function takes on the following asymptotic form:

where f is some function of the angular coordinates known as the scattering amplitude. This general form is valid for any short-ranged, energy-conserving interaction. It is not true for long-ranged interactions, so there are additional complications when dealing with electromagnetic interactions.

The full wave function of the system behaves asymptotically as the sum,

The differential cross section is related to the scattering amplitude:

This has the simple interpretation as the probability of finding the scattered projectile within a given solid angle.

), the characteristics of target (for example the number of particles per unit of surface N), and the type of interaction. For

Relation to the S-matrix

If the reduced masses and momenta of the colliding system are mi, pi and mf, pf before and after the collision respectively, the differential cross section is given by

where the on-shell T matrix is defined by

is the Dirac delta function. The computation of the S-matrix is the main goal of the scattering theory.

If a beam enters a thin layer of material of thickness dz, the flux of the beam Φ will decrease according to:

where σ is the total cross section of all events, including scattering, or to absorption, or transformation to another species. Solving this equation leads to the exponentially decaying behavior:

where Φ0 is the initial flux. For light, this is called the Beer–Lambert law.

The total cross-section is related to the absorbance of the light intensity through Beer–Lambert law, which says absorbance is proportional to concentration:

where Aλ is the absorbance at a given wavelength λ, C is the concentration as a number density, and

is the path length. The absorbance of the radiation is the logarithm (decadic or, more usually, natural) of the reciprocal of the transmittance:[2]

Scattering of light on extended bodies

The total cross-section is related to the absorbance of the light intensity through Beer-Lambert's law, which says absorbance is proportional to concentration:

, where Aλ is the absorbance at a given wavelength λ, C is the concentration as a number density, and l is the path length. The extinction or absorbance of the radiation is the logarithm (decadic or, more usually, natural) of the reciprocal of the transmittance:[3]

The scattering cross-section is related to the meteorological range, LV:

Differential and total scattering cross sections are among the most important measurable quantities in nuclear and particle physics. Instead of the solid angle, the momentum transfer may be used as the independent variable of differential cross sections.

Differential cross sections in inelastic scattering contain resonance peaks that indicate the creation of metastable states and contain information about their energy and lifetime.

The elastic collision of two hard spheres is an instructive example that demonstrates the sense of calling this quantity a cross section.

are the radii of the scattering center and scattered sphere, respectively,

the impact parameter and

the polar angle of the exit trajectory as above. Then the differential scattering cross section is

The total cross section is

) within which the center of mass of the incoming sphere has to arrive for it to be deflected, and outside which it passes by the stationary scattering center.

Example 2: differential cross section for the geometric light scattering from the circle mirror

Another example illustrates the details of the calculation of a simple light scattering model obtained by a reduction of the dimension. For simplicity, we will consider the scattering of a beam of light on a plane treated as a uniform density of parallel rays and within the framework of geometrical optics from a circle with radius

with a perfectly reflecting boundary. Its three dimensional equivalent is therefore the more difficult problem of a laser or flashlight light scattering from the mirror sphere, for example from the mechanical bearing ball.[5] The unit of cross section in one dimension is the unit of length, e. g. one meter. Let

and the scattering angle is

The differential cross section is therefore

). It confirms the intuitive expectations that the mirror circle acts like a diverging lens and a thin beam is more diluted the closer it is from the edge defined with respect to the incoming direction. The total cross section can be obtained by summing (integrating) the differential section of the entire range of angles:

so it is equal as much as the circular mirror is totally screening the two-dimensional space for the beam of light. In three dimensions for the mirror ball with the radius

it is therefore equal

We can now use the result from the Example 2 to calculate the differential cross section for the light scattering from the perfectly reflecting sphere in three dimensions. Let us denote now the radius of the sphere as

. Let us parametrize the plane perpendicular to the incoming light beam by the cylindrical coordinates

. In any plane of the incoming and the reflected ray we can write now from the previous example:

while the impact area element is

Using the relation for the solid angle in the spherical coordinates:

and the trigonometric identity:

while the total cross section as we expected is

As one can see it also agrees with the result from the Example 1 while photon is assumed to be a rigid sphere of the zero radius.