In this animation, the ship near the top is crossing the T of the ship on the bottom. 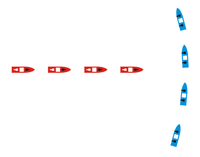 The blue ships are crossing the T of the red ships

Crossing the T or capping the T is a classic naval warfare tactic used from the late 19th to mid 20th centuries, in which a line of warships crosses in front of a line of enemy ships, allowing the crossing line to bring all their guns to bear while receiving fire from only the forward guns of the enemy.[1]

It became possible to bring all of a ship's main guns to bear only in the late 19th and the early 20th centuries, with the advent of steam-powered battleships with rotating gun turrets, which were able to move faster and turn more quickly than sailing ships, which had fixed guns facing sideways. The tactic became largely obsolete with the introduction of missiles and aircraft as long-range strikes are less dependent on the direction the ships are facing.

When going into battle, ships would assume a battle line formation called "line astern", in which one vessel follows another in one or more parallel lines. This allows each ship to fire over wide arcs without lofting salvos of projectiles over friendly vessels. Each ship in the line generally engages its opposite number in the enemy battle line which moves in a parallel course.

However, moving ahead of the enemy line on a perpendicular course (crossing the T) enables a ship to launch salvos at the same target with both the forward and rear turrets, maximizing the chances for a hit. It also makes ranging errors less critical for the ship doing the crossing, while simultaneously more critical for the ship being crossed. In military terms, this is known as "enfilade fire". The tactic, designed for heavily armed and armoured battleships, was used with varying degrees of success with more lightly armed and armoured cruisers and heavy cruisers.

Advances in gun manufacturing and fire-control systems allowed engagements at increasingly long range, from approximately 6,000 yards (5.5 km; 2.9 nautical miles) at the Battle of Tsushima in 1905 to 20,000 yards (18 km; 9.8 nautical miles) at the Battle of Jutland in 1916. The introduction of brown powder, which burned less rapidly than black powder, allowed longer barrels, which allow greater accuracy; and because it expands less sharply than black powder, it puts less strain on the insides of the barrel, allowing guns to last longer and to be manufactured to tighter tolerances. The addition of radar allowed World War II-era ships to fire farther, more accurately, and at night.

Notable battles in which warships crossed the T include: