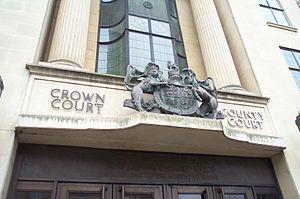 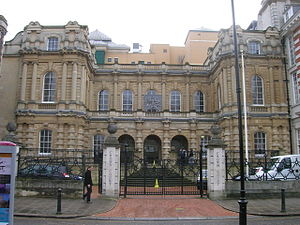 The Crown Court sits in around 92 locations in England and Wales. The administration of the Crown Court is conducted through HM Courts Service. Previously conducted across six circuits (Midland, Northern, North Eastern, South Eastern, Wales & Chester and Western), HM Courts and Tribunals Service is now divided into seven regions: Midlands, North East, North West, South East, South West, London and Wales. The Wales region was identified separately, having regard to the devolved legislative powers of the Welsh Assembly Government.[1] When the Crown Court sits in the City of London it is known as the Central Criminal Court.[2] The "Central Criminal Court" at the Old Bailey, originally established by its own Act of Parliament, is a Crown Court centre, and is the venue at which many of the most serious criminal cases are heard.

The Crown Court carries out four principal types of activity: appeals from decisions of magistrates; sentencing of defendants committed from magistrates’ courts, jury trials, and the sentencing of those who are convicted in the Crown Court, either after trial or on pleading guilty. On average, defendants in custody face a waiting time of 13 weeks and 3 days. Those on bail experience greater delay, waiting on average 15 weeks and 4 days until their case is heard.

Rather than speaking of a location at which the Crown Court sits, it is common practice to refer to any venue as a Crown Court, e.g., Teesside Crown Court.

In 2003–04 the Crown Court heard 11,707 appeals against conviction, sentence or both, from those convicted in the magistrates' courts. At the conclusion of the hearing the Crown Court has the power to confirm, reverse or vary any part of the decision under appeal. If the appeal is decided against the accused, the Crown Court has the power to impose any sentence which the magistrates could have imposed, including one which is harsher than the one originally imposed. There was a waiting time of just over 8 weeks for appeals; 90% of appellants waited 14 weeks or less.

Defendants committed from magistrates' for sentencing

In 2003–04 the Crown Court dealt with 31,018 cases for sentencing from the magistrates'. As the magistrates' courts only have the power to impose a six-month custodial sentence or a £5,000 fine, the court has the power to commit defendants to the Crown Court for sentencing — this can be done when they are of the opinion that either the offence, or the combination of the offence and one or more offences associated with it, was so serious that greater punishment should be inflicted than the magistrates' court has power to impose, or, in the case of a violent or sexual offence, that a custodial sentence longer than the court has power to impose is necessary to protect the public from serious harm. Committals may also arise from breaches of the terms of a Community Rehabilitation Order or a suspended sentence of imprisonment. The court performance target is that cases committed for sentence should be heard within 10 weeks.

The Crown Court disposed of 83,247 committals for trial in 2003–04. Taking into account 29,752 cases still outstanding, the implied waiting time for trials was 18½ weeks. This is the time between committal or lodging an appeal and the start of the Crown Court hearing. This level of delay has been gradually worsening over the last 6 years. The average time to try a case on a plea of not guilty is about 7 hours. Since the average length of a sitting day is 4.33 hours, this implies that a not guilty case takes just over the equivalent of 1½ court days.

Appeals from the Crown Court

When the Crown Court is dealing with a matter connected with a trial on indictment (i.e., a jury trial), appeal lies to the criminal division of the Court of Appeal and thence to the Supreme Court. In all other cases, appeal from the Crown Court lies by way of case stated to a Divisional Court of the High Court.

The Crown Court was established on January 1, 1972 by the Courts Act 1971[3] to replace the courts of assize and quarter sessions. The Crown Court is a permanent unitary court across England and Wales, whereas the assizes were periodic local courts heard before judges of the Queen's Bench Division of the High Court, who travelled across the seven circuits into which England and Wales were divided, assembling juries in the assize towns and hearing cases. The quarter sessions were local courts assembled four times a year to dispose of criminal cases which were not serious enough to go before a High Court judge.

The Crown Court and a county court may sit in the same building and use the same jurors. Since the establishment of Her Majesty's Courts Service in April 2005 there is an increased sharing of facilities between the Crown Court, county courts and magistrates' courts. 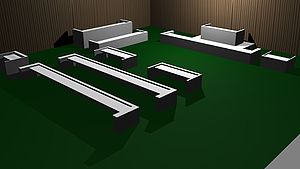 At the front of the court, on a raised platform, is a large bench. This is where the judge sits. His/her rank can be distinguished by the colour of gown worn, and different forms of address are appropriate for different ranks of judge, with "Your Honour" being the most common in Crown Courts. The judge enters and exits the court from a door typically at the side of the platform, preceded by a cry of "All Rise" from the usher or clerk of the court who sits below and in front of the judge's bench. Everyone present is required to show their subjection to the court by standing as the judge enters (or exits) until he/she sits down.

Note that there is no national flag in a Crown Court, nor does the judge have a gavel. There is however a Royal Coat of Arms on the wall above the judge's bench.

The clerk of the court, who sits facing the court (that is, the same way as the judge) has a dedicated desk with computer and telephone, used when communication is necessary with other parts of the court building (for example the jury assembly area or the cell complex).

Also in the area just in front of the judge's bench is a stenographer who records proceedings on a stenograph, by typing keys as the witnesses speak, using special shorthand. Alternatively, if there is no stenographer, a tapelogger or shorthand writer will be there to operate the tapes and ensure that a log of the proceedings is kept.

Another member of court staff is the usher. If papers or other objects need to be passed around the court, for example notes from members of the jury, or evidence being shown to the jury, normally the usher will do this and will be the only person in the court to walk around while the court is in session.

Behind the barristers will sit the instructing solicitors, who in the case of the prosecution will usually be a representative of the Crown Prosecution Service.

At the back of the courtroom, behind the barristers, is a semi-partitioned area known as the "dock". This is where the defendant or defendants are placed. A custody officer will be sitting with them in the dock.

Also at the back of the court, often adjacent to the dock, is an area from where members of the public can observe the proceedings. In some courts, notably the Old Bailey, this area is positioned above the defendant.

Members of the press may sit in the press bench, which is usually positioned alongside the prosecuting barrister. Etiquette usually requires reporters to identify themselves to the usher before taking position here and starting to write.

Alongside the defending barrister is the jury box. This is where the jury watch the case from. They will be called to it from the jury waiting area (benches next to it) to be sworn in. Once sworn they always sit in the same seat throughout the trial. If proceedings (such as legal argument about the admissibility of evidence) take place which they are not supposed to see occur, the usher will escort them into a room just outside the courtroom (probably behind the dock). Only jurors and ushers ever enter this room.

Opposite the jury box is the witness box. Witnesses stand facing the jury and give their evidence so the jury can watch their demeanor while giving it, which might help them decide if the witness is being truthful.

When the judge sends the jury to consider their verdict, the usher escorts them to a small suite consisting of a large table, 12 chairs, lavatory facilities, paper and pencils, a button with which to call the usher, (although in most courts this is done just by knocking loudly on the door) and prominent notices about not revealing deliberations to anyone else. The usher withdraws, and when the jury have arrived at a verdict, they push the button.

During deliberations only limited contact is permitted with the outside world, always via the usher. The jury will be permitted only (a) to call for refreshments, (b) to pass a note to the judge, perhaps asking for further guidance, or (c) to announce that they have reached a verdict. The judge may decide to recall them to the court to address them again at any time.

Originally, the court was divided into six circuits as follows: