The crown lands, crown estate, royal domain or (in French) domaine royal (from demesne) of France refers to the lands, fiefs and rights directly possessed by the kings of France.[1] While the term eventually came to refer to a territorial unit, the royal domain originally referred to the network of "castles, villages and estates, forests, towns, religious houses and bishoprics, and the rights of justice, tolls and taxes" effectively held by the king or under his domination.[2] In terms of territory, before the reign of Henry IV, the domaine royal did not encompass the entirety of the territory of the kingdom of France and for much of the Middle Ages significant portions of the kingdom were the direct possessions of other feudal lords.

In the tenth and eleventh centuries, the first Capetians—while being the kings of France—were among the least powerful of the great feudal lords of France in terms of territory possessed. Patiently, through the use of feudal law (and, in particular, the confiscation of fiefs from rebellious vassals), conquest, annexation, skillful marriages with heiresses of large fiefs, and even by purchase, the kings of France were able to increase the royal domain. By the time of Philip IV, the meaning of "royal domain" began to shift from a mere collection of lands and rights to a fixed territorial unit,[3] and by the sixteenth century the "royal domain" began to coincide with the entire kingdom. However, the medieval system of appanage (a concession of a fief with its land rights by the sovereign to his younger sons, which reverts to the crown upon the extinction of the male line of the original holder) alienated large territories from the royal domain and sometimes created dangerous rivals (especially the Duchy of Burgundy from the 14th to the 15th centuries).

During the Wars of Religion, the alienation of lands and fiefs from the royal domain was frequently criticized. The Edict of Moulins (1566) declared that the royal domain (defined in the second article as all the land controlled by the crown for more than ten years) could not be alienated, except in two cases: by interlocking, in the case of financial emergency, with a perpetual option to repurchase the land; and to form an appanage, which must return to the crown in its original state on the extinction of the male line.

Traditionally, the king was expected to survive from the revenues generated from the royal domain, but fiscal necessity, especially in times of war, led the kings to enact "exceptional" taxes, like the taille, upon the whole of the kingdom (the taille became permanent in 1439).

Chronology of the formation of the royal domain 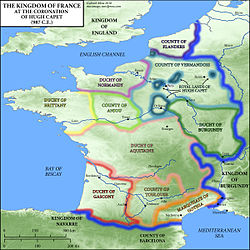 The Kingdom of France at the time of Hugh Capet. French royal domain in blue.

At the beginning of Hugh Capet's reign, the crown estate was extremely small and consisted essentially of scattered possessions in the Île-de-France and Orléanais regions (Senlis, Poissy, Orléans), with several other isolated pockets, such as Attigny. These lands were largely the inheritance of the Robertians, the direct ancestors of the Capetians.

Reign of Henry I

Reign of Philip I 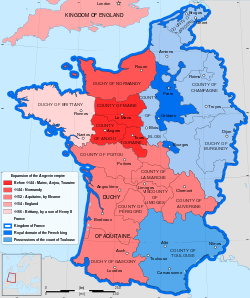 The Kingdom of France in 1154. French royal domain in dark blue. 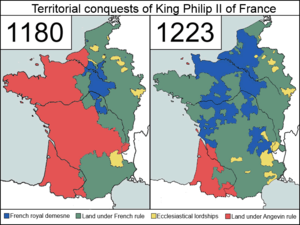 Reigns of Philip IV, the Fair and his sons

Reign of Philip VI of Valois

File:Apanages.svg
The royal domain and the appanages early in the reign of Charles VI. 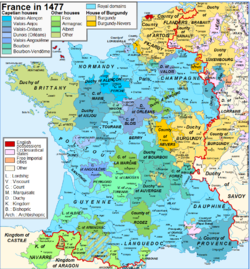 Reign of Francis I

From the reign of Francis I, the concept of "royal domain" begins to coincide with the French kingdom in general; the appanage of the House of Bourbon however remains alienated.