Croxley Green is a large suburb of Rickmansworth and a civil parish of approximately 5,000 dwellings and 12,000 residents located between Watford (to the north-east) and Rickmansworth (to the south-west) in Hertfordshire, England. Croxley is about 20 miles north-west of London. 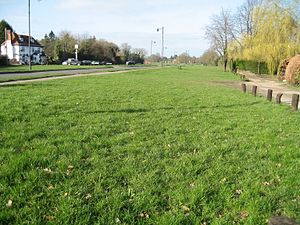 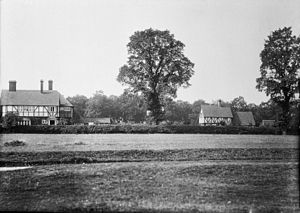 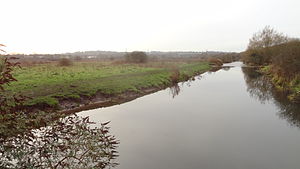 River Gade with Croxley Common Moor on the left

Croxley Green has a large village green surrounded by some of its oldest buildings (17th century) including the Croxley Green Windmill. There is extensive building from the 19th Century centred on New Road plus a good deal of housing stock from the 1930s, built at the time of the Metropolitan line branch. The Green houses the "Revels on The Green", an annual village fair which includes a traditional maypole dance, which used to be illustrated on the road signs on entering the village.

In 2008 a group of residents were successful in gaining "village green" status also for a small area of woodland ("Buddleia Wood") to the south of the village, thereby protecting the area for generations to come.

The village signs were replaced in February 2008 with a scene of All Saints Church and The Green. The revels were featured in Metro-land, the 1973 television documentary by John Betjeman, who referred to them solemnly as "a tradition dating back to 1952". The annual Mummer folk play "St. George & The Dragon" is played out during the Christmas period at a number of village hostelries. Since 2006 the Parish Council have organised a firework display on The Green for New Year's Eve.

Croxley Mill was built in 1830 adjacent to the Grand Union Canal by the paper manufacturer John Dickinson.[1] Croxley Script stationery used to be produced there by John Dickinson and Co. Ltd. but is now a trade mark registered to Sappi (U.K.) Limited. Streets in Croxley (Dickinson Square, Dickinson Avenue, Barton Way and others) are named after Mill owners and management and some contain housing built by the company for mill workers at the end of the 19th Century.[2] The mill closed in 1980. A windmill was built c1860. It survives today converted to residential accommodation.

Croxley Common Moor to the south of the village, OS grid reference TQ083949 was designated as an SSSI in 1986.

Train services are currently provided by the Watford branch of the London Underground Metropolitan line from Croxley station. The journey takes around between 40 to 45 minutes to Baker Street or 60 minutes to Aldgate in the City of London. The village is further away from the now-closed Croxley Green railway station on the Croxley Green to Watford line. Proposals were put forward for the line to be re-opened as part of the Metropolitan line. The Croxley Rail Link gained confirmed funding in December 2011, and Croxley Green station will not be reopened, rather a new Cassiobridge station will be constructed.[3]

Croxley Green has an active Residents Association and Parish Council and is also the home of an array of local organisations dedicated to pastimes and leisure. The Croxley Green Society run the "Revels" and there are varying clubs including the Camera, Needlecrafters, Wine, Vineyard, Bicycle, Jazz, and Folk to mention the first few.

John Theodore Tussaud (1858–1943) the great-grandson of Madame Tussaud lived at The Hawthorns, 17 New Road, in the early years of the 20th century (c1902-1914).[10][11] Barbara Woodhouse the dog trainer presented Training Dogs the Woodhouse Way on television in the 1980s and lived at Campions from the 1940s to the 1980s.[12] It is also the home to the 1980 BBC Mastermind winner (and sometime London black cab driver) Fred Housego.[13] Before his death in 1997 Ron Tarr used to live on Durrants Drive - he was a British actor best known for playing the part of "Big Ron" in EastEnders.