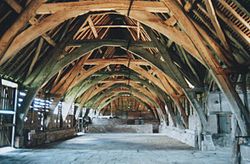 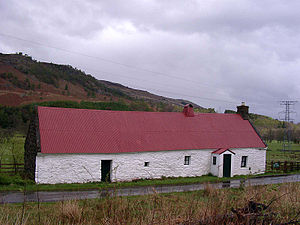 The Moirlanich Longhouse, a byre dwelling with a cruck frame.

A cruck or crook frame is a curved timber, one of a pair, which supports the roof of a building, used particularly in England. This type of timber framing consists of long, generally naturally curved, timber members that lean inwards and form the ridge of the roof. These posts are then generally secured by a horizontal beam which then forms an "A" shape. Several of these "crooks" are constructed on the ground and then lifted into position. They are then joined together by either solid walls or cross beams which aid in preventing racking (the action of each individual frame going out of square with the rest of the frame, and thus risking collapse).

The term crook or cruck comes from Middle English crok(e), from Old Norse krāka, meaning "hook". This is also the origin of the word "crooked", meaning bent, twisted or deformed, and also the crook used by shepherds and symbolically by bishops.

Crucks were chiefly in use in the medieval period for structures such as large tithe barns. However, these bent timbers were comparatively rare, as they were also in high demand for the ship building industry. Where naturally curved timbers were convenient and available, carpenters continued to use them at much later dates. For instance, base crucks are found in the roofs of the residential range of Staple Inn Buildings, Nos. 337 – 338, High Holborn, London. This is dated by documented records to 1586, with significant alterations in 1886 (under Alfred Waterhouse) and further restorations in 1936, and 1954–55. Despite these changes, an authority on English Historic Carpentry, Cecil Hewett, has stated that these 16th-century crucks are original.

During the current revival of green oak framing for new building work, which has occurred mainly since approximately 1980 in the UK, genuine cruck frames have quite often been included in traditionally carpentered structures.[1] There are also some fine, historically authentic reconstructions. For instance, Tithe Barn, Pilton, Glastonbury, whose original roof was destroyed by lightning, has been carefully rebuilt in 2005 from curved oaks. The necessary trees were sought out, using special templates, in English woodlands.

The large main barn of the manor house Barlow Woodseats Hall features what is claimed to be the longest continuously roofed cruck barn in Derbyshire, and possibly even in the United Kingdom.

No cruck frames are known to have been built in America though there are rare examples of what may be an upper cruck or knee rafters. Rare examples of cruck framing are found on continental Europe such as in Belgium,[2] Flanders, Northern France and the Corrèze region of France.[3]

An example of a Yorkshire cruck barn complete with a heather thatched roof can be found in Appletreewick.[4] The crucks or cruck "blades" are a single oak tree riven (split) in two to form an equally shaped A frame. 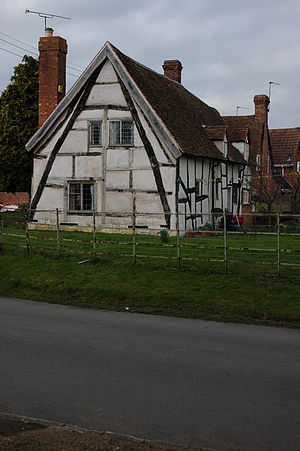 A half timbered house in Worcestershire, GR SO961453, framed with a full cruck

The apex of a cruck frame also helps to define the style and region of the cruck. Different types include the butt apex, halved, housed, yoke, and crossed forms.[7] 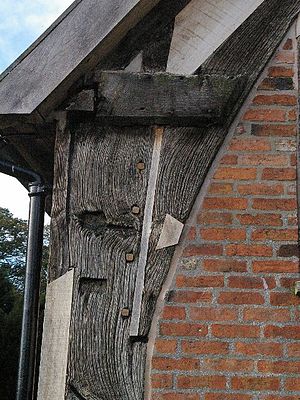